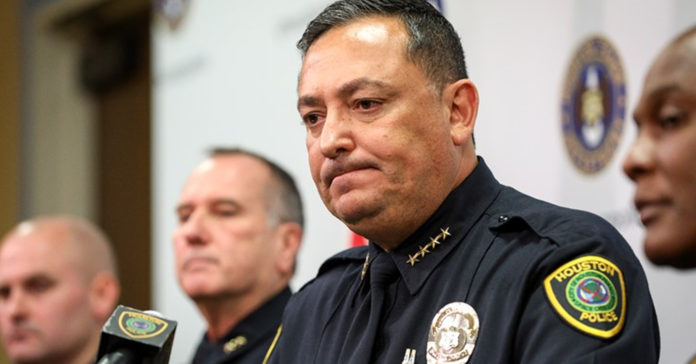 Chief Art Acevedo’s announcement about leaving Houston to continue his career in Miami came as a big surprise to most Houstonians. “With the end of Mayor [Sylvester] Turner’s final term in office fast approaching and my strong desire to continue serving as a police officer, we decided that the timing for this move was good,” he said in an email.

In a recent interview with The Texas Tribune’s Evan Smith, Houston’s former police chief shared his views about the George Floyd Act, the way local officials are leading the state, and what he thinks will happen in the upcoming elections.

Smith openly asked him what he thought of Gov. Abbott’s job, to which Acevedo responded he has been very lucky he hasn’t encountered a worthy opponent. “If Dan Patrick or other big-name jumps on the race he’s going to have a tough time,” he said.

Acevedo affirms Texans are practical, and they will choose their next governor based on that, when asked about his opinion on Beto O’Rourke’s potential run he says the Democrat is his own worst enemy, especially when he said he would go door to door in order to get people’s guns, “Moderation is the key to gaining the hearts of most Americans,” he said.

Talking about the city of Houston, the Cuban-born chief recognized the job being made by Mayor Turner, “He’s the hardest-working elected official I’ve ever had the honor to work with, he works 24/7. He’s done a phenomenal job.”

Smith also seized the opportunity to ask him about the rumors surrounding him and State Sen. John Whitmire about a possible run for Houston Mayor, Acevedo said that Whitmire often suggested he should do it, but the chief thinks of himself as a man of action and that that kind of job was not for him. He did however suggest that he would be really glad if Whitmire decided to run, describing him as a problem solver and a practical man beyond moderate, progressive, and conservative ideologies.

Acevedo also talked about what he thinks of Judge Lina Hidalgo’s job, “she’s done a good job, but we don’t see eye to eye on criminal justice,” he said. The 56-year-old police chief said they have different views concerning criminal justice and that he’s definitely not up for “cuddling” violent criminals.

Moving on to the Legislature,  Smith asked him what his views were about HB88, Rep. Senfronia Thompson’s George Floyd Act, which aims to ban chokeholds and requires law enforcement to intervene if another officer is using excessive force against a civilian. “I support that and anyone who doesn’t does not belong on the job,” he said.

Smith pointed out that what worries most Republicans is the fact that that bill also removes qualified immunity from police officers. Acevedo said that’s problematic because “If we scratch immunity we won’t have new people joining.”

Rep. Thompson has said that the bill is not about punishing good cops, it’s about punishing bad cops. To which Acevedo responded that law enforcement officials need to feel secure in order to protect the community.

Smith also addressed the matter of race in the criminal justice system, to which Acevedo replied that the police is made up of members of the community and that when we have so many radicals and white supremacists as part of our communities, they’re bound to be part of the police force as well.

“We know we have bad apples, the problem is police chiefs who don’t get rid of bad apples,” He said.

Finally, Acevedo shared his views on gun control, an issue gaining more attention during the legislative session, especially after the recent shootings in Boulder and Atlanta.

Acevedo said that there are very reasonable measures that need to be taken, guns should be only carried by law-abiding citizens and we should have universal background checks to remove firearms from individuals in crisis. “The right should stop worrying about the NRA, it’s time to take action, no more prayers” he said, “People get elected to take action, not to pray.”

Art Acevedo will be joining the Miami police department in a couple of weeks. He was replaced by Troy Finner who was appointed chief by Mayor Turner last week.