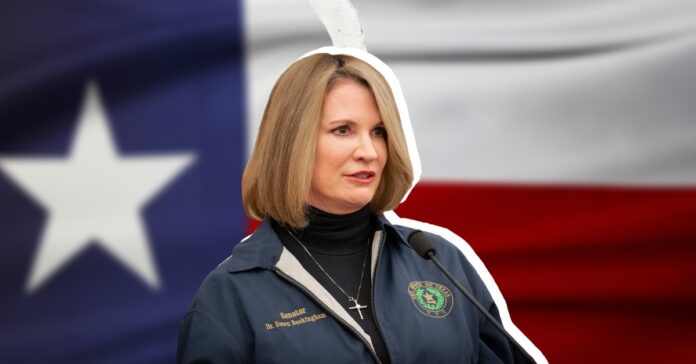 Newly elected land commissioner, Republican Dawn Buckingham said this week that like her predecessor, George P. Bush, she will not release requested portions of the multibillion-dollar Harvey relief fund to Harris County or the City of Houston.

In addition, Buckingham, like Bush, has announced the agency will continue to block the distribution of funds — even portions meant to help protect storm-vulnerable areas against future damage — with none of it going to Houston and Harris County.

The dispute between the agency and city and county officials is still ongoing some five-plus years after the record-setting hurricane made landfall in Southeast Texas in August of 2017.

Buckingham, who vacated her seat in the Texas Senate to run for the state General Land Office, will inherit control of the state’s Hurricane Harvey recovery efforts. The multibillion-dollar fund was set up to aid the recovery from the damage and also prepare the area for future storm events.

Bush remains hostile to Houston officials, as his agency has sought to seize funds from the city’s housing recovery programs — in the amount of $141 million. The funds were to be used for housing recovery, small business grants, and various nonprofit services, pending approval from the U.S. Department of Housing and Urban Development, known as HUD.

But a HUD review of the dispute found the GLO discriminated against communities of color by withholding aid to Houston and Harris County.

Instead, the GOP-controlled agency steered said funds away from diverse urban centers, redirecting them to predominantly white, rural, inland counties — areas of the state at much less risk to hurricanes.

The agency has also ignored the initial HUD deadline to come into compliance with civil rights protections.

However, the GLO disputes the finding, rejecting calls from federal housing officials to negotiate a settlement with Houston-area officials. According to a July letter from Deputy Land Commissioner Mark Havens, the agency correctly formulated the plan to recover the $141 million from the city.

Earlier this year HUD Secretary Marcia Fudge said she would refer the matter to the U.S. Department of Justice if Texas did not voluntarily agree within 60 days.

Turner spokeswoman Mary Benton said the city has yet to hear from the Biden administration, though the mayor sent HUD a follow-up letter last Thursday urging secretary Fudge to step up efforts to force a resolution.

“More than 9 months have passed since HUD issued the (discrimination finding) and yet GLO and the State of Texas, to our knowledge, have taken no steps to come into compliance,” Turner wrote. “It is imperative, now, more than ever, that HUD immediately exercise its enforcement authority and compel GLO to come into compliance.”

Bush and Houston Mayor Sylvester Turner have been at loggerheads since April 2020, when Bush announced his plans to take control of the city’s $1.3 billion recovery program, arguing his agency could more quickly manage the assets to a successful conclusion.

Following legal action from both sides, the two officials struck a deal in early 2021, with Turner relinquishing control of Houston’s bogged-down single-family housing program, but leaving the city with $835 million to continue its other recovery-related efforts, including a revamped effort to build affordable multifamily housing.

The GLO plans to put the money into a state program focused on rebuilding Harvey-damaged single-family homes in Houston — previously a purview of the city —before it ceded control to the state agency last year.

As part of the agreement, the city and GLO agreed on spending benchmarks to measure the city’s progress on each of its remaining programs, but this summer said the city had missed the agreed benchmarks, spending nearly $100 million less than it should have, according to a July letter from Deputy Land Commissioner Mark Havens.

Buckingham, who defeated Democrat Jay Kleberg in the midterm election, made clear she will continue to withhold the Harvey funds and has no plans to redistribute the mitigation aid so Houston and Harris County receive a larger amount to insure the completion of the recovery.

“What we’re seeing is, they haven’t been able to meet their own metrics,” Buckingham said this week. “And so, I think with the limited amount of time that these resources are available, and the limited amount of recovery that’s happened at this point, we’re anticipating that there’s going to be a redirection of funds.”

Rather than striving to find a resolution to the pending legal conflict with the federal government, Buckingham has spent her time “diving in” on new areas of responsibilities, such as oil and gas leases on public land, state-run veterans’ homes, the state coastline, and an in-progress restoration of the Alamo.

“It’s a tremendous learning curve,” Buckingham said. “I don’t know that anyone can be an expert in every area this agency touches.”

The contentious action carried out by the Republican-controlled state government and the Democratically controlled Houston area over recovery funds goes back to the year of the storm.

Houston Mayor Sylvester Turner wrote to the governor in 2017 asking the state to use the $10 billion fund to help the recovery as soon as possible to avoid raising property taxes to raise the estimated $50 million for recovery efforts.

But Abbott said the state would not tap into the state Rainy Day Fund to help Houston and Harris County to recover from the devastation caused by the storm and historic flooding it caused, stating that the city had all the funds it needed.

“In times like these, it’s important to have fiscal responsibility as opposed to financial panic,” Abbott said. He later added that “the mayor seems to be using [Harvey recovery] hostage to raise taxes.”

The comments by Buckingham this week follow on the heels of a year-long battle by the GOP state government with Democratically controlled Harris County over elections administration.