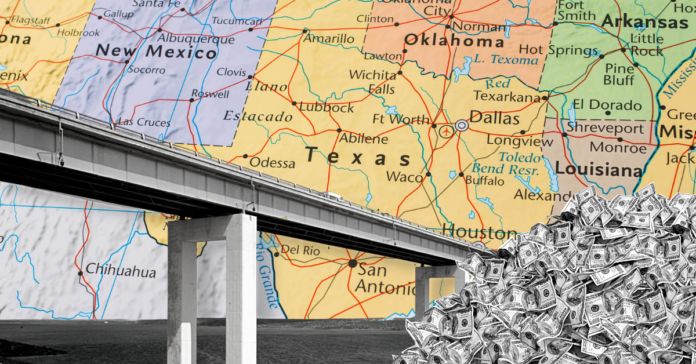 Texas House Speaker Dade Phelan is preparing for some long nights in Austin come January, as the state budget is bulging with cash, which will bring many proposals to the floor of the legislative chambers to plead their case for a share of the pie.

“It is a heck of a lot easier to pass a budget with a deficit than a surplus,” Phelan joked during lunchtime remarks to the Transportation Advocacy Group (TAG) at the Houston regional meeting last Wednesday, according to a Houston Chronicle report.

Phelan explained that when Texas has deficits, people come before lawmakers, make their case, but don’t stay around to learn the outcome of their pleas. The longer they have to present their case, the more questions come from lawmakers to justify their proposal.

But for the 88th Texas Legislature operating with a huge surplus, Phelan said, those looking for funding will likely linger at the state capitol building, making meetings run long into the evening.

The state will have a projected extra $27 billion to spend in 2023, half of which Abbott and other Texas GOP leaders have suggested  earmarking to help pay for property tax cuts and other legislative priorities, per reporting by the Texas Tribune last week.

The extra $27 billion surplus comes from higher revenues than expected coming into the state during the current biennium, which Comptroller Glenn Hegar, the state’s top accountant, said came from record-high tax revenues over the last year.

This summer, Hegar put the total of the general fund to be nearly $150 billion, which is significantly higher than the 2021 budget of $112 billion.

But, Phelan said he cannot promise long-term tax relief with a surplus that may not be available in 2025 blaming inflation for the potential issue.

“I guarantee you in 2025 there will not be a $30 billion surplus,” he told TAG members at the Houston meeting, noting the state’s budget is going to grow simply because of inflation. “No one is considering what it is going to cost to run the government.”

He warned that the state infrastructure, particularly state highways and bridges, are desperately in need of repair and maintenance. Citing the condition of rural roads battered by oil and gas production, notably in the Permian Basin, he said that tapping the rainy day fund for upgrades could make sense.

Just this weekend, an earthquake in West Texas, the third largest ever recorded in state history, is blamed on an increase in seismic activity linked to injecting fracking wastewater underground, according to the U.S. Geological Survey. It was so large of an event that it was felt from the New Mexico border to Austin.

But, regardless of what his legislative priorities might be, convincing 100 of the 150 House members to vote for a bill is a high bar to reach. “One hundred is harder than you think,” he said of securing the two-thirds vote to approve any appropriation.

While the new legislative session won’t gavel in until January, lawmakers have already begun filing bills last Monday, with more than 800 filed in just the first day .

However, thousands of pieces of legislation are filed each session, but most never become law.

According to bills filed, here are some areas Texas lawmakers want to consider for funding appropriations —

Rep. Gina Hinojosa, D-Austin, filed a bill that would change how the state funds Texas’ 1,204 public school districts and open-enrollment charters. With House Bill 31, Hinojosa wants the funding tied to average enrollment, versus the current method based on average daily attendance. In cases of absenteeism due to illness, such as flu or covid related illnesses, for example, the school loses money, thus superintendents have been calling for funding based on enrollment.

The idea of getting rid of the M&O tax gained traction among Republicans this year, but if they seek to rebate or reduce property taxes, the results could be disastrous for lower-income districts.

Rep. Richard Peña Raymond, D-Laredo, proposed bills that would require regulators to create plans to protect the state’s oil and gas infrastructure and water treatment facilities from severe weather events and power outages, such as the deadly winter storm Uri.

Other Democratic lawmakers also filed bills that seek to harden energy and water infrastructure to endure other severe weather events like hurricanes, which are now enhanced by climate change.

Rep. Lina Ortega, D-El Paso, and Sen. Nathan Johnson, D-Dallas, both filed bills to expand postpartum Medicaid to 12 months. In 2021 the House voted to give new mothers access to Medicaid for one full year after they gave birth, but the Senate reduced that period to six months.

However, the federal Centers for Medicare and Medicaid Services overruled the Senate’s application and automatically approved the 12-month extension through the American Rescue Plan.

House Republicans also support the move, given their position on abortion in the wake of the state ban they implemented after the overturning of Roe v. Wade.

Rep. Donna Howard, D-Austin, filed House Bill 70, which would make menstrual supplies like tampons and pads tax-exempt. Howard has filed similar bills each of the last five years. But now Gov. Greg Abbott and other key Republicans have signaled their support for eliminating the “tampon tax.”

So far, state lawmakers have filed dozens of bills seeking to tame Texas’ property taxes, which are among the highest in the nation because that revenue is used as the primary source of public school funding. Whereas other states have income taxes to aid in their public education efforts, Texas does not.

Most Republican leaders have said they want to use the giant budget surplus to lower homeowners’ tax bills, but others like Phelan want to address other issues they see as more pressing.

Another proposal — House Bill 32, from state Rep. Giovanni Capriglione, R-Southlake, would limit how much appraisal districts can raise a single-family home’s value.

State Rep. Diego Bernal, D-San Antonio, filed a bill requiring appraisers to make property valuations based on the value of neighboring homes, which is aimed at preventing displacement in gentrifying neighborhoods.

Based on the Summary of Appropriation for the 2022-2023 Biennium submitted last January to The Eighty-seventh Legislature in 2021, the state appropriated $13.3 billion from the federal Coronavirus State Fiscal Recovery Fund ($12.8 billion).

An additional appropriation was made from the Coronavirus Capital Projects Fund ($500.5 million) awarded to the state through the American Rescue Plan Act.

The report was prepared by the Legislative Budget Board Staff, and they reported that the funds were appropriated as follows:

• $475.0 million for critical and emergency staffing and support grants

• $300.0 million for the acquisition and construction of a state operations center

• $286.3 million for TRS-ActiveCare and TRS-Care claims related to the COVID-19 pandemic

The remaining $24.0 billion of Texas’ federal awards was earmarked for various purposes including food and nutrition services, rental and homeowner assistance, transportation, and childcare and other support grants, among others.

Other bills have also been filed, but do not pertain specifically to the budget surplus. They are more aligned with ongoing culture war issues and other clashes between the two parties. They are as follows: