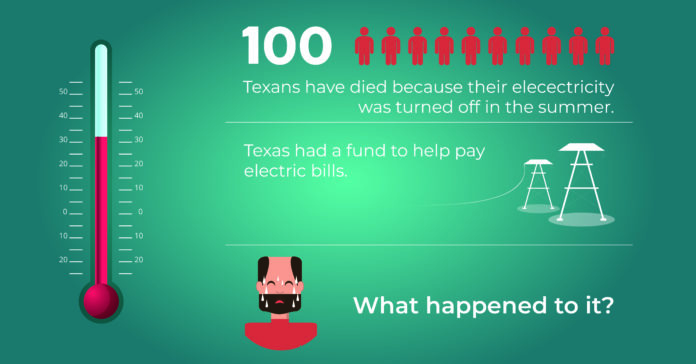 It’s safe to say that, at least in Texas, the summer of 2019 will be remembered for its “atomic heat lamp on burned flesh” ambience.

Heat-related illnesses were extremely prevalent in Texas’ lower-income population. Particularly amongst low-income Texans who had their electricity disconnected.

Termination of electric service is a contributing factor to the nearly 70 heat-related fatalities Texas experiences every year, according to a recent investigation by the Austin American-Statesman.

“Those deaths coincide with an alarming 117 percent spike in the number of customers who’ve had their electricity cut off over failure to pay during the hottest months of the year,” according to the Statesman.

State law prevents REPs from disconnecting electricity during heat advisories and on holidays and weekends. However, that can still leave Texas’ low-income residents weeks without electric service.

From 1999-2013 low-income Texans had Lite-Up Texas to help them through the state’s brutal summers.

The Texas utility assistance program provided discounts on electricity to nearly 700,000 households through a 65-cent per megawatt-hour surcharge on utility bills.

The state generated approximately $100 million a year from this charge, which underwrote the assistance program. Although it was fairly common for the State Legislature to use a portion of that money to close gaps in the state budget.

The legislature canceled the program in 2013 and its funding bled dry by 2016, ending its seventeen-year run and placing many in the lower-income segment of the population in a desperate situation.

But two years ago the legislature passed SB 1976, which transferred the responsibility of offering discount programs to the providers or utilities.

“Public Citizen would like to see all of those programs continue and be more robust,” White said. “And frankly, probably, reach larger segments of people.”

When it was up and running, Lite-Up Texas reduced the electricity bills for low-income families by 25 percent to 31 percent.

In order to receive the discount, people had to qualify for Medicaid and the SNAP food stamp program.

Moreover, it was only offered in deregulated markets such as Houston, Austin, and San Antonio.

In areas not eligible for the Texas utility assistance program, the federally funded Comprehensive Energy Assistance Program, or CEAP administers funds to those struggling with paying their electric bills.

The money is disbursed by the Texas Department of Housing and Community Affairs (TDHCA).

The state agency dispenses the funding via 37 sub-recipients across Texas, according to Kristina Tirloni, the TDHCA’s media relations/senior communications advisor. The sub-recipients, or providers, work with their in-need consumers directly.

In an editorial, the Statesman called for legislators to allow struggling customers to make payments to their electricity provider over a nine-month period. Currently, state law only allows for a five-month payment plan.

“There are actually more sustainable models that would utilize, for example, solar energy, to reduce bills permanently instead of in perpetuity having to provide a discount,” she said.

In Austin, the option for Austin Energy to provide low cost, local solar to decrease bills is one they’re looking at, White said.

She added that they’re not seeking to eliminate long-standing programs like CEAP.

“[It’s] something that can reach a larger segment that extends a little bit higher in income,” she said. “But is still serving people who are struggling with affordability.