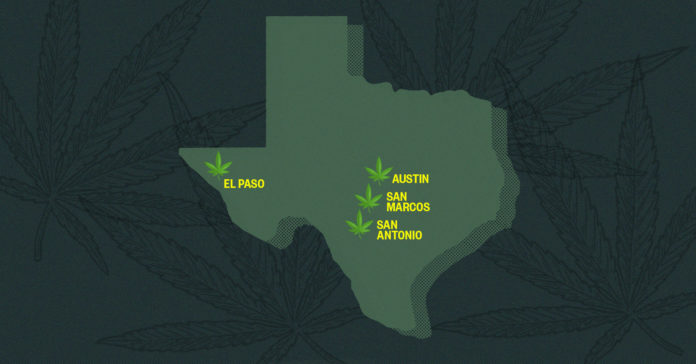 It has been over 10 months since the Texas Legislature and Gov. Greg Abbott signed the federal farm bill into Texas law, legalizing the farming and production of hemp across the Lone Star State. While this bill significantly increased federal funding for Texas agricultural farmers, lawmakers at the Texas Capitol forgot to include a small but crucial detail for how and when local jurisdictions are allowed to charge and prosecute low-level marijuana cases across the state.

The result of this misstep? Marijuana prosecutions in Texas have dropped by more than half, three major Texas cities have passed resolutions dropping the prosecutions of all misdemeanor marijuana cases, and just last week the San Marcos City Council became the first in the state to begin drafting an ordinance for a cite and release policy for prosecuting marijuana misdemeanor cases.

The Texas Legislature has not given local authorities any direction, and the state hasn’t decriminalized or legalized marijuana.

So where does the plant stand in Texas?

Although the federal legislation behind the farm bill primarily aimed to increase agriculture funding to struggling Texas farmers, it also narrowed the definition of marijuana to cannabis containing more than 0.3 percent of tetrahydrocannabinol, the chemical that produces the high. Anything less than that amount is classified as just another legal crop.

To put it simply, that means the new Texas law would require confiscated suspected marijuana products to be tested for their THC levels in order to determine if they are legal. However, just last month, the Texas Department of Safety announced that it will no longer be testing marijuana in state crime labs for low-level cases, mostly due to the additional testing requirements proving to be a strain on country resources.

Law enforcement agencies across the state do not currently have the proper testing equipment, certified personnel, and approved methodology to quantifiability analyze the concentration of THC in a lab sample, and although the Texas Department of Safety is expected to roll out a new testing system any day now, it will only be applied to felony marijuana cases, the Austin Chronicle reported. So possession of over four ounces or the sale and delivery of more than seven grams will be tested for marijuana prosecution charges. Anything lower than that would have to be tested in a private lab.

This announcement by the Texas Department of Safety follows one of many decisions we are seeing from local city councils and District Attorney’s offices across the state.

In July, Travis County became the first in the state to reject pursuing misdemeanor posses­sion of marijuana charges filed from June 10 forward, unless they’re accompanied by a lab report. Shortly after, some of the state’s largest counties including Tarrant, Harris, Bexar, Fort Bend, and Nueces  began announcing that they were no longer prosecuting for personal possession charges  under four ounces, without a lab test proving the evidence seized had illegal THC content.

Unfortunately, the initial announcement from Travis County did not stop Austin citizens from receiving citations for low-level possession charges, and it was not until the Austin City Council passed a city resolution earlier this year that officially decriminalized the possession of low-level marijuana across the city. The resolution restricted city funds from being used to create a testing program for marijuana and encouraged Austin police to stop tickets and arrests for low level possession.

The cities of El Paso, San Antonio, and most recently, San Marcos, have joined Austin in drafting cite and release policies that aim to end arrests for misdemeanor marijuana possession which would include anything under 4 ounces. However, not everyone is super happy about this change in marijuana policy, especially Governor Abbott, who recently sent out a letter to Texas district attorneys urging them to continue prosecuting low level-cases.

In addition, all four of the Texas cities that have passed resolutions regarding cite and release policies have held public meetings to receive feedback from the community on how to properly enforce felony marijuana possession charges within the new program. Without any clear direction or updates from the Texas Legislature, local law enforcement agencies and city governments across the state continue to struggle in determining an efficient and appropriate way to prosecute any type of marijuana possession case in their county.

Currently, it is apparent that there are cracks in Texas’ long-standing war on weed, as the unintended consequences of the Texas Legislature’s hemp legalization bill continue to mount for local law enforcement agencies.

Although we believe the Texas government is far from accepting widespread decriminalization as some other states have, we have definitely seen a major shift in local government leadership in a short amount of time. Maybe, just maybe, this is because political leaders are noticing that a new generation is showing up to the polls, and perhaps they’d rather see things like affordable housing, instead of spending thousands of dollars a year locking up people for minor possession of a plant that has been legal for most of the history of the planet.