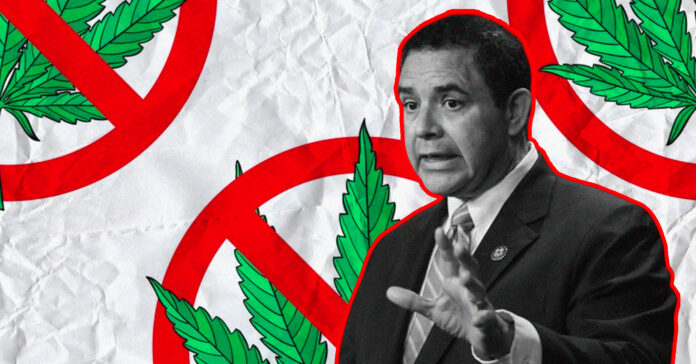 U.S. Rep. Henry Cuellar (D-Laredo) voted against a landmark marijuana legalization bill on Friday that passed in the House. He and another Democrat were the only ones to vote against their party’s wishes.

Cuellar, who is currently in a fierce runoff for his 10th term against progressive attorney Jessica Cisneros, has always been a moderate Democrat – he opposes abortion and was the lone Democrat to vote against federal abortion rights legislation.

According to The Texas Tribune, the bill – named the Marijuana Opportunity Reinvestment and Expungement Act — removes marijuana from the list of federally controlled substances and eliminates criminal penalties for people who possess, manufacture and distribute the drug. The bill would also expunge people’s records of non-violent cannabis crimes.

The 220-204 vote included all Texas representatives besides Cuellar voting along party lines – one other Democrat, U.S. Rep. Chris Pappas of New Hampshire was the other black sheep to vote against the bill. There were only three GOP votes in favor of the legislation.

It now heads to the evenly-divided Senate and would need significant Republican support to receive the 60 votes necessary to pass.

Cuellar has gotten off to a rough start, missing the majority threshold necessary to win his March primary, he is now heading into a late-May runoff election with Cisneros.

The Laredo Congressman is also embroiled in an ongoing FBI investigation after the agency raided his house in January.

The agency did not say what it was investigating, only saying it was conducting a “court-authorized law enforcement activity.”