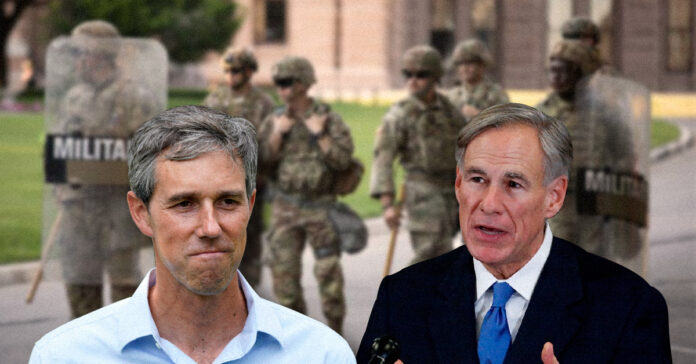 On Monday, Fmr. Rep. Beto O’Rourke, who is running for governor of Texas, joined the host of The Last Word, Lawrence O’Donnell on MSNBC to discuss the troublesome issues The National Guard members are facing in the southern border mission.

Lawrence asked O’Rourke – who recently spoke to members of Operation Lone Star – to shed light on the issues he identified at the border.

“The first thing I want to tell you is that these men and women are the best of us,” Beto continued. “But 10,000 of them have been called up with 10 days notice, forced to leave family jobs, kids, and their communities to be mere window dressing for the governor’s reelection campaign. Those aren’t my words, those are the things they have told me.”

O’Rourke continued by listing some of the issues The National Guard has had to deal with; from their pay being delayed to their tuition benefits slashed in half so Gov. Greg Abbott could fund the operation, all the while “most of the young men have not encountered a migrant in the three to four months they have been there”

“Let them come back home and only send them out when we have a real crisis or emergency. What is happening at the border does not meet that bar,” said O’Rourke.

Lawrence then mentions the 2 billion dollars that are estimated will go into this deployment and how that money could have been well spent on the power grid, to which Beto agreed.

“ERCOT, say that if we hit severe weather like last February we are at a 40% generating capacity shortfall right now, because the governor and legislation did nothing to weatherize the grid and prepare us for the next extreme weather event,” O’Rourke continued.

“That money could have gone to schools, where educators in Texas are underpaid by 10,000 dollars compared to their national counterparts. We could have supplemented and expanded Medicaid to ensure that more Texans can see a doctor or not fear dying. – There are a lot of needs here that those billions of dollars could have gone to meet.”

The Former Representative then blames Abbott for making this a political ploy that affects not only the taxpayers but the “honorable and admirable” members of the National Guard. Ironically, it was only last week that Gov. Abbott accused those who criticize Operation Lone star as opportunistic adversaries who only want to turn the matter political. Perhaps it would be a good idea to stop politicizing the lives of so many honorable men and women, right?

Which leads Lawrence to ask that after winning the Republican primaries governor Abbott will no longer think there is any need for this expenditure on the southern border.

“It is interesting that you ask that question. A member of the guard that I met with yesterday said, ‘I just hope that after the Republican primary is over I can go back home’, I think that’s the best hope,” O’Rourke said.

Making an additional point, Beto mentioned the sudden wave of suicides Operation Lone Star had to deal with, making special reference to a young man who had asked for a waiver, but took his life after being denied his right.

“One said; I have the career opportunity of a lifetime and I want to make sure I can take advantage of it and instead they denied that and said; we are going to send him down to the border. He took his own life,” O’Rourke continued.

“So they shouldn’t have to wait for a Republican primary or really anything at all, especially if this mission has no purpose. Let’s get them back to their families.”