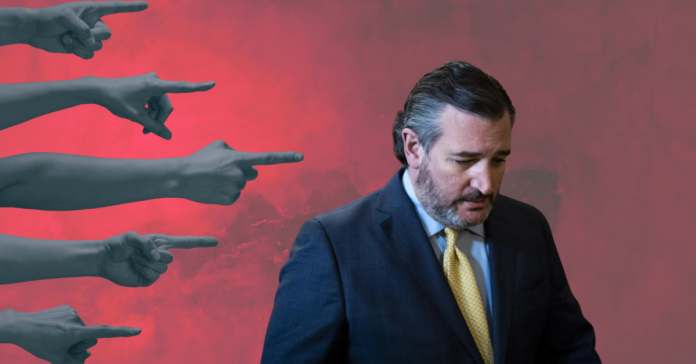 After a long day at the National Rifle Association (not even a week after the mass school shooting at Uvalde), Senator Ted Cruz finished his evening at a sushi restaurant. He was interrupted by a Texan who confronted him over his stance on gun ownership.

Benjamin Hernandez, the man behind the confrontation, was motivated after seeing the video of democrat Beto O’Rourke confronting GOP members at the press conference that occurred after the Uvalde primary school shooting. O’Rourke called out Gov. Greg Abbott, exclaiming that “You’re doing nothing. You’re all doing nothing”.

Hernandez told the Huffington Post that when he saw that video he thought that is what everyone should do, and that when he saw Cruz sitting comfortably at a restaurant after attending a gun convention, he decided on talking to him.

Indivisible Houston shared the video of their encounter on Twitter:

Even though quite a few republicans like Gov. Abbott backed down from attending the annual NRA convention in respect of the victims of the shooting on Tuesday, Cruz never hesitated. He attended in full pride and gave a speech where he utilized the situation to further impose his ideology, to explain that mass shootings have nothing to do with gun control.

“Taking guns away from these responsible Americans will not make them safer, nor will it make our nation more secure. In an age where elites embrace defunding the police, when homelessness runs rampant, when gangs dominate entire communities, and when radical district attorneys refuse to prosecute violent crime in cities across America, rarely has the Second Amendment been more necessary to secure the rights of our fellow citizens”, he said in an excerpt from his speech.

Ted Cruz refuses to connect the dots and acknowledge that poor gun control and mass school shootings is an issue that is almost exclusive to the United States. No first world country, who each has their own mental health issues within their people, has the amount of shootings and casualties of children in school like the U.S. does. But no, Cruz, guns have nothing to do with this issue.

Benjamin Hernandez confronted the Senator on all of these issues in a span of 2 minutes  He questioned his congruence of stating he is grieving with the victims’ families, and then a few days later attending a gun centered event and using the situation to his benefit.

“Background checks ― is that so hard?” he says.

Cruz responded that Democrats’ proposals could not have stopped the shooter. Salvador Ramos waited until he was of legal age to purchase the two AR-15 rifles and more than 1,600 rounds of ammunition he used to kill 19 children and two teachers.

Hernandez finished the conversation stating that Cruz knew all too well he could make it harder for people to get guns. With no need of a background check or a license, it is too easy for anyone unstable to get access to these firearms meant for massive destruction and used in warzones.

It seems like the Senator’s response is canned and reutilized when needed. He responded nearly the same thing to a Skynews reporter and a The Guardian reporter in the past few days.

In general, GOP members have tried with all their might to shift the blame from the guns to things as ridiculous as school doors and lack of prayers. It is a breath of fresh air to see people like Benjamin Hernandez and Beto O’Rourke standing up to their nonsense arguments and putting them on the spot.