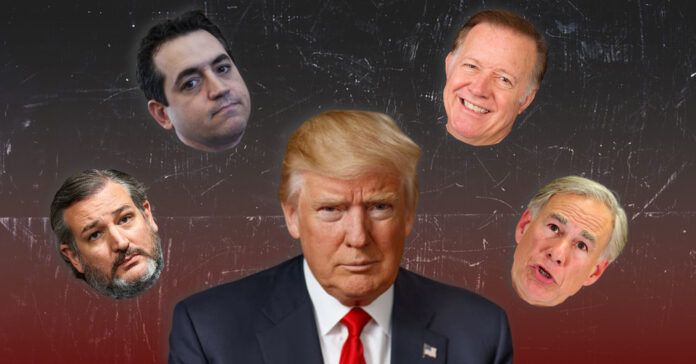 Last Monday, the Federal Bureau of Investigation and the Department of Justice raided Mar-a-Lago, the Florida House of former President Donald Trump. The raid is reportedly linked to an investigation into his handling of classified and sensitive material, although the FBI and the Department of Justice have yet to comment on the search. Republicans nationwide capitalized on this situation by expressing solidarity with the former President and fiercely demanding explanations from the FBI. Texas republicans were not left behind, as they criticized this action on social media and dined with Trump just a day after the Mar-a-Lago raid.

Us. Rep. Randy Weber of Friendswood posted a picture of Trump on Twitter, surrounded by his signature MAGA hats, with the following caption: “With our great President! The FBI Hierarchy & DOJ & the White House should be ashamed!” CBS News reported that the dinner was planned by U.S. Rep. Jim Banks of Indiana as “a solidarity moment” with the President and was attended by members of the House Republican Study Committee, which counts 20 Texans among its membership. Other than Randy Weber, who posted the picture, and U.S. Rep. Michael Cloud of Victoria, who appears in Weber’s picture, it is not entirely clear which members of this Committee attended the dinner that was celebrated at Trump’s golf club in New Jersey.

Besides having dinner with Trump, other Texan Republicans commented on the issue on social media.

For example, Matt Rinaldi, head of the Republican Party of Texas, tweeted: “Abolish the FBI”. US Senator Ted Cruz tweeted that the raid was “corrupt” and an abuse of power. Cruz also underlined the unprecedented importance of the FBI raid, as it is the first time a former US president’s home has ever been searched by law enforcement. Finally, Texas Gov. Greg Abbott tweeted that the FBI actions were “another level Nixonian” and that “never before has the country seen an Administration go to such extent to use the levers of government to target a former President and a political rival.”