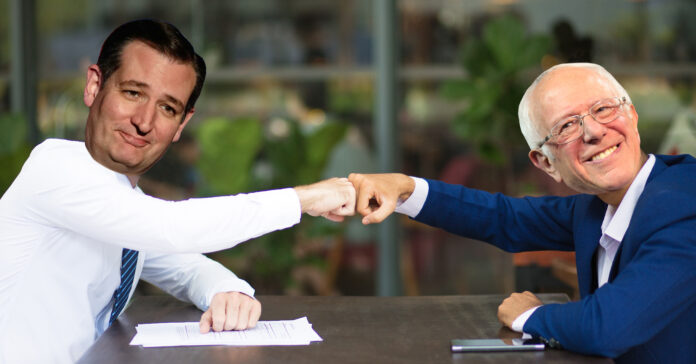 U.S. Senators Ted Cruz and Bernie Sanders shared a fist bump on Thursday after the Texas conservative cast his vote for the progressive Sanders’ unsuccessful bid to force rail companies to give their employees more sick leave.

“I always knew you were a socialist,” Sanders joked with the Texas Republican, according to a Politico reporter who observed their comic exchange.

The comic moment took place on the Senate floor, not on the set of Seinfeld — but it was reminiscent of the famous episode of the comedy series entitled “The Bizarro Jerry,” — which was the comedian’s nod to the Superman series character Bizarro, who did everything opposite from Superman.

“I told him on the floor that I just voted with him and I said, ‘Bernie, I don’t know if that hurts you more or me more,’” Cruz said.

Cruz and a handful of other Republicans backed the proposed amendment by Sanders to add seven sick days to a labor agreement Congress was scrambling to pass to avoid a rail strike, but the amendment failed to draw the necessary 60 votes to pass.

Cruz and Sanders were among only 15 senators to vote against the final deal as the unamended agreement passed easily, 80-15.

The Republican support for the pro-union amendment is evidence of how the GOP is adopting certain populist stances, in opposition to their traditional pro-business political loyalties. The Democratic party has long been pro-labor, however, the possible economic disaster that could occur with a total railroad shutdown was deemed too critical to follow the usual playbook.

Texas Sen. John Cornyn voted to oppose the sick leave addition to the bill authored by Sanders. Many in Congress argued it was necessary to force the parties to accept the current deal to avoid a strike that could cripple interstate shipping at a critical time — the holiday season — which is critical for the U.S. economy.

Texas is the nation’s largest exporter and has more railway miles than any other state, making it even more bizarre for Cruz to be on the opposite side of Cornyn on the vote.

From agricultural producers to chemical manufacturers, the state relies on trains to move its supplies and finished products. “I think it is our responsibility,” said Cornyn when asked about his decision to support the agreement.

The 52-43 tally on the sick leave proposal fell short, but it had the support of nearly all Senate Democrats but was opposed by most Senate Republicans.

On Monday, President Joe Biden asked Congress to intervene to avert the rail stoppage that could devastate the nation’s fragile economy by disrupting the transportation of fuel, food, and other critical goods.

Pro-business groups such as the U.S. Chamber of Commerce and the American Farm Bureau Federation warned that a strike by rail workers could cause a $2 billion per day hit to the economy.

On Wednesday, the U.S. House passed the bill easily, by a vote of 290-137 to head off the looming nationwide rail strike.

The bill forces rail companies and workers to accept the terms of a proposed settlement that was reached in September, but later rejected by some of the 12 unions involved.

Four of the 12 unions, representing more than 100,000 employees at large freight carriers, had voted against the deal and threatened to go out on strike if an agreement couldn’t be reached by Dec. 9.