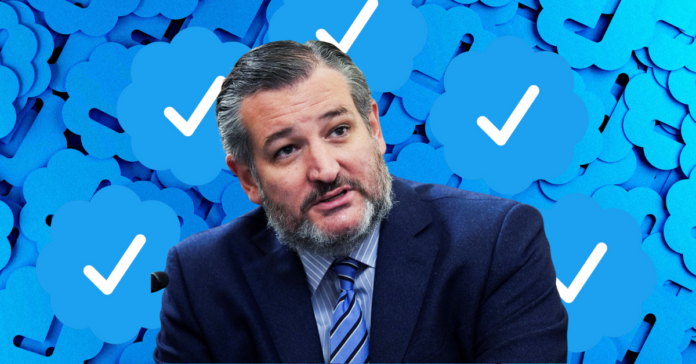 Not a day has passed without a new Elon Musk Twitter fiasco, from firing half of the staff to an $8-a-month plan that allows people to be “verified,” which got revoked almost immediately, Musk navigates treading waters with a business that was already struggling.

Many businesses, political leaders, government agencies, and celebrities have fallen victim to a fast-multiplying horde of impersonators with a “verified” blue check. One of the latest targets has been Texas Sen.Ted Cruz who is no stranger to hecklers and online trolls.

Under the fake account of @tedcruz_tx, “Cruz” tweeted: “Oh look, it’s the woke mob assuming that just because i profit off of gun violence, and do nothing to prevent it, that somehow it’s my fault.”

Another fake account with an obscene Twitter name wasn’t as civilized and made crude and sexual posts about the senator and his wife.

While experts tried to warn Musk of the digital vandals that Twitter housed, Chris Tomlinson, columnist for The Houston Chronicle, said the billionaire “arrogantly ignored them. Instead, Musk gave the vandals new tools and greater power to break windows.”

Twitter’s blue-check program blew up fast, and Musk had to put a stop to it due to “impersonation issues,” and began attaching “official” labels to major corporate accounts like Eli Lilly, who halted all Twitter ad campaigns after an impersonator caused panic at the company for tweeting: “We are excited to announce insulin is free now.”

Few of the nation’s most prominent businesses and political figures have escaped viral Twitter impersonations in recent days: Former presidents, such as Donald Trump, and George W. Bush, and giant companies: defense contractor Lockheed Martin, Musk’s automaker Tesla, have all been retweeted widely, with fake-but-verified badges attached, as reported by The Washington Post.

Musk, however, does not seem worried at all. Instead, he has been joking around answering impersonators’ tweets with laughing emojis and responding to his critics by tweeting an image of a t-shirt, reading “Your feedback is appreciated. Now pay $8.”

On Tuesday, Musk said that the blue check subscription service will be relaunched on Nov. 29.

In addition to his own questionable tweets and retweets, his whole “free speech” thing has been really inconsistent. He abruptly fired roughly 50% of Twitter’s staff and he has banned several users for impersonating himself on the site.

He later proceeded to fire several employees for criticizing his leadership publicly on Twitter and privately in internal Slack channels.

Confirming the reports out of Protocal and Platformer that additional employees were fired for private Slack messages, Musk offered a brief apology on Tuesday: “I would like to apologize for firing these geniuses. Their immense talent will no doubt be of great use elsewhere.”