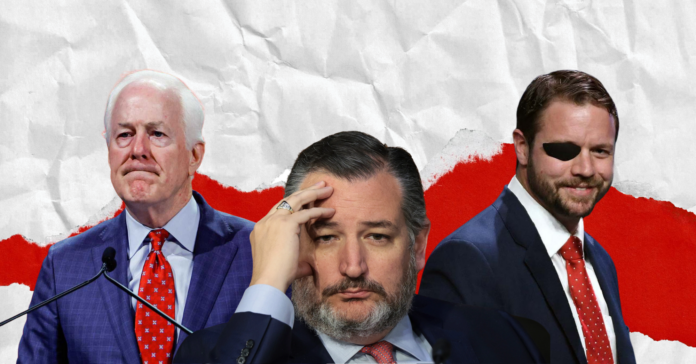 Republicans in Texas are proud to stand and announce local grants from the bipartisan infrastructure law. The problem is they all voted against it. All of them.

For the second time in two weeks, Houston scored a big grant from the Department of Transportation, and for the second time in two weeks, Republicans were quick to show up for the ribbon cutting. The back-to-back $21 million announcements, first for the Telephone Road Main Street Redevelopment project and then for 20 new electric buses, were celebrated by local Houston officials, even Republicans who opposed the projects.

Congresswoman Sheila Jackson Lee and Congresswoman Sylvia Garcia, both of whom proudly supported the Infrastructure Investment and Jobs Act back in 2021, talked about how these funds make needed investment in often overlooked communities. Both programs will serve low to moderate income communities by providing cleaner and more efficient public transportation as well as safer streets.

The announcement also attracted representatives of the “C” team – Cornyn, Cruz, and Crenshaw – who lined up to show support. Staffers from all stood with METRO Chairman Sanjay Ramabhadran and Houston Mayor Sylvester Turner to make Monday’s announcement.

Earlier this year, Texas Republican Representative Ronny Jackson claimed an “instrumental” role in securing funding for a water purification project in his district despite vocal opposition to the infrastructure bill, which is funding the project. Jackson voted against the measure and mocked it as “bloated,” but apparently not too bloated for his pet project.

Newly-elected Congresswoman Mayra Flores of Brownsville also opposed the infrastructure bill, but is now touting the federal largesse pouring into South Texas without revealing that she vehemently opposed the enabling legislation as “wasteful,” and smeared Republicans who voted for the bill as “the RINO Bunch.”

She joins a long list of Republicans who have recently “voted no and taken the dough” in refusing to support investments in their communities to please their far-right base, but then being the first in line to take credit.

It appears that President Joe Biden and Secretary Pete Buttigieg are making investments so popular that Republicans are comfortable putting aside their voting records and harsh words about the infrastructure bill.

With the Biden Administration racking up multiple legislative victories, Republicans can look forward to attending a lot more ribbon cuttings. Perhaps one day they will vote for the popular programs instead of lining up for photo ops.