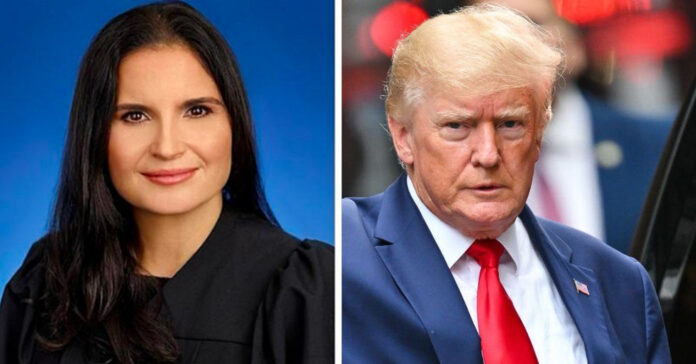 A Texas woman is facing federal charges for allegedly threatening Judge Aileen Cannon, the federal judge who approved the appointment of a special master to review classified documents recovered by the FBI during the Aug. 8 search of Mar-a-Lago, according to CBS News.

Tiffani Shea Gish, who lives in the Houston-area, allegedly left three threatening voicemails for Cannon using the pseudonym Evelyn Salt, a character in the movie “Salt.” Gish allegedly told Cannon that “Donald Trump has been disqualified long ago, and he’s marked for assassination, you’re helping him, ma’am.”

Gish allegedly added that she was “Donald Trump’s hitman, so consider it a bullet from Donald Trump himself.” She also alleged that Trump was “responsible for 9/11” and that she was a federal agent, the affidavit said. She faces two charges related to threatening a federal official and was ordered detained pending trial after an initial court appearance.

Gish appears to “suffer from severe mental impairments with symptoms including paranoia and delusions,” according to the filing.  She has a competency hearing set for Tuesday.

Gish admitted to making the calls and told authorities that she was the only one with access to the phone that left the messages, according to the FBI.

Judge Cannon reported the voicemails to the U.S. Marshals Service on Sept. 3, according to the affidavit.

Judge Cannon was appointed to the bench by then-President Donal Trump in 2020. She sided last week with the former president, ruling that a neutral “special master” must be appointed to review the files taken by the FBI from Mar-a-Lago for “potentially privileged material subject to claims of attorney-client and/or executive privilege.” The Justice Department is appealing Cannon’s ruling.