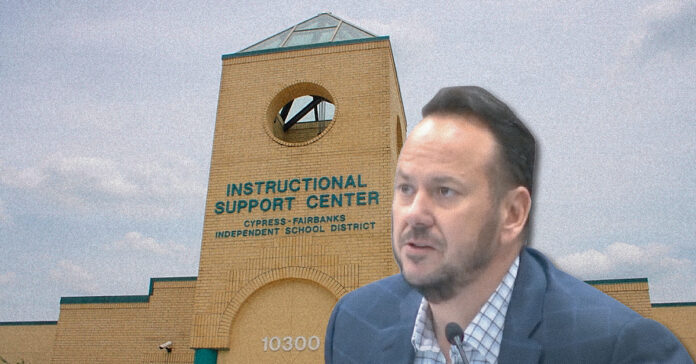 As voters become more polarized in certain parts of the country and elect candidates that express strong sentiments about cultural wedge issues, one question remains: What happens when you remove long-term elected officials from office and replace them with candidates with more extreme views?

At least one Texas public school district is finding out. In 2021, Cypress-Fairbanks Independent School District voters removed long-term board members John Ogletree, Don Ryan, and Bob Covey from office and elected candidates with decidedly far-right political orientations to replace them. At least one of those newly elected officials is coming under fire for his comments at a recent board meeting.

Local leaders were outraged with at least one official suggesting that Mr. Henry should resign. “As a product of Cy-Fair ISD, I’m appalled by Board Member Scott Henry’s insinuation that more Black teachers lead to more dropouts,” said Harris County Judge Lina Hidalgo. “Divisiveness and racism are what’s hurting our students. Not diversity. Resign.”

Other leaders commenting on and posting about Henry’s remarks include Houston Mayor Sylvester Turner and even Don Layton, the former board member that Henry replaced. “I was deeply saddened and offended to hear the comments made by @CyFairISD School District Board Member Scott Henry. His comments are unacceptable, and I recommend that he resign immediately,” Turner tweeted.

“Suggesting that having more Black teachers in a school district can create an increase in the dropout rate or a decline in classroom achievement is despicable. The rich diversity that resides in our city and region unites us more than ever. We should not tolerate those who seek to divide, but rather work with everyone to ensure equal opportunities of educational access for all.”

In response, Henry indicated that his words were taken out of context as he was responding to attacks on the school district by an organization that uses the single metric of percentages of black teachers to determine student success.

Some local officials see Henry’s comments as the by-product of a larger campaign to discredit public schools. Nikki Cowart, the President of the Cy-Fair American Federation of Teachers (AFT) alluded to the use of Critical Race Theory issues in Henry’s campaign for the board. “Scott Henry’s statements at Monday’s School Board meeting are ignorant and appalling, and he should resign immediately,” Cowart said. “Henry falsely equated lower student performance with Black teachers—something unfounded and vile, but not unexpected since he ran his campaign for trustee on the notion that we shouldn’t ever be talking about racism in schools. And yet, he’s happy to exemplify racist opinions from the dais of a school board meeting.”

Many believe that trustees like Henry are elected as the result of a national push from the far-right to take over government at the most basic levels. According to Carol Corbett Burris, the Executive Director of the National Network for Public Education, “The culture war attacks on public schools are just one more front in the war on our neighborhood public schools. Faux grassroots groups are being funded by the same individuals and foundations that promote voucher legislation and the expansion of charter schools. Their objectives are clear–increase unhappiness with public schools; force responsible citizens to resign from boards and, if elected, further gut education funding and support.“

Henry’s comments were not the only statements in the news that reflect negative extremist views about public schools. Michael Quinn Sullivan, the publisher of the Texas Scorecard and a long-time right-wing Texas state politico, tweeted an incendiary statement on January 8th.  “A reminder that “public education” is a babysitting service offered at the convenience of the government employees,” Sullivan said. “Public education in Texas is about employing otherwise unemployable adults, not educating kids.”

Social media exploded in response to Sullivan’s comments with a large percentage of those responding directly vehemently disagreeing, with one person reminding him to “Try not to be so obvious regarding your plight to undermine PubEd in this state.”

This is not the first time Sullivan has been embroiled in controversy. In 2019 as the chief executive of the far-right group Empower Texans, he surreptitiously taped then-Speaker of the House Dennis Bonnen as he outlined efforts to target several Republican House members to unseat during the 2020 primary elections. Sullivan released the tape and Bonnen resigned over the controversy but Sullivan and Empower Texans lost credibility among politicians and the state in general. A short year later the group lost even more credibility when two of their staffers forgot to turn off their microphones during a podcast and were heard mocking Governor Abbott because he uses a wheelchair.

There is growing concern that extremists like Henry and Sullivan are simply pawns in a greater chess game of social and business policy development by right-wing ideologues. Empower Texans was founded by Tim Dunn and is partially funded by brothers Pharis and Dan Wilkes – all three evangelical oil and gas billionaires from West Texas. Henry received at least one donation from the conservative Cherry Tree Republicans PAC which promotes far-right candidates like Don Huffines on its website.

So back to the original question– What happens when you remove long-term elected officials from office and replace them with candidates with more extreme views? The answer seems simple. You get officials focused on creating policies that reflect those views. As a result, they govern from their political orientation and preference and not from a place that is best for all constituents. The people they represent pay the price.