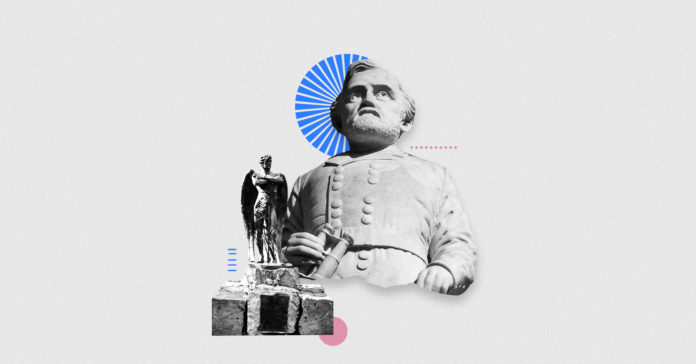 Every day for the last two weeks, Texans have taken to the streets to protest police brutality and systemic racism in our country. On June 2, 60,000 of us here in Houston witnessed the Rev. William Lawson, Houston’s own civil rights-era icon, and other faith leaders stand shoulder-to-shoulder on the steps of City Hall with a new generation of young activists.

At Houston City Council, we’ve heard from hundreds of newly engaged residents who are taking up the torch for criminal justice reform. It’s happening in communities big and small across the state. They are united with advocates who have been in this fight for decades.

Yet, in the background of this momentous opportunity are remnants of the Confederacy, the very symbols protestors are standing up against. I fully support the planned removal on Juneteenth (June 19) of the Confederate statues in Houston’s Sam Houston Park and Hermann Park.

As we reassess policing in our communities, we must also address the deep-seated racism in our country and eradicate the root causes that have existed for far too long. If we’re not able to recognize our own mistakes and do what is necessary to right these wrongs, we will be no better off than we were in the Texas of the 1950s (when segregation was the law and the Ku Klux Klan attacked my great-grandfather because he was Jewish), or even the Texas of 2014, when some Houston high school mascots were still called “the Rebels.”

As someone who is Jewish, the issue of civil rights for all is intrinsically tied to my faith. As a white female, I continue to challenge myself, “how can I be a better ally?” I’m compelled to draw attention to the South’s resistance to ending the Jim Crow era’s stronghold, including the disgraceful glorification of the Confederacy.

Despite my upbringing to champion and fight for the rights of others, as an undergraduate student in New Orleans, I was someone’s date to a popular fraternity party on campus, Kappa Alpha’s “Old South.” I regret with all my heart how oblivious I was. Girls dressed in Southern belle dresses and fraternity members donned Confederate uniforms. The real meaning symbolized by a college party, and Confederate statues across the South, was white-washed to look like some “Gone With The Wind” version of the true evil they stand for.

We must deal with this monstrous lie. It’s important to recognize the harm and destruction resulting from the institutionalization of discrimination, and the tragic reality that for far too long the Confederacy has been glorified.

I am working with our mayor and my colleagues to bring down Houston’s Confederate statues. I ask you to join me by helping with similar efforts in your own community. It’s disgraceful that in the chambers of the Texas House, Confederate artwork still hangs and that statues are on our state capital’s lawn.

But we must not stop with removal of the statues and monuments. It’s also time to rename streets tied to the Confederacy. Houston’s Dowling Street was renamed Emancipation Avenue, but Tuam Street, part of which runs through my City Council district, also has racist ties. Tuam, Ireland, is the hometown of Richard Dowling — a Confederate commander — and the street was named in his honor.

The failure to address these wrongs, and not calling them out for what they are, subtly encourages some police officers to reserve the right to inflict the most egregious acts of violence on Black citizens.

Symbols are an important part of a larger struggle to end violence against Black people. It is not enough to remove Confederate monuments. We must build in their place testaments to the proud history of African American leaders. In my City Council district, one of the jewels of American civil rights history sits quietly: Freedmen’s Town. I am resolved to ensure that every child growing up in our city knows that in this neighborhood, even after years of developer encroachment and wholly insufficient government protection, stands the largest intact freed slave settlement in the country. It was here many freed people settled when news of emancipation arrived via Galveston two years after President Abraham Lincoln’s proclamation. This special day is marked by Juneteenth, which is only days away.

We must keep fighting to rectify the vast, wretched legacy of the Confederacy. We must acknowledge our past so that we can continue to grow together. Each of us as Americans has a duty to address institutional racism in our country, in our criminal justice system, in our neighborhoods and in our schools. That starts right here at home.

Kamin is a member of Houston City Council.