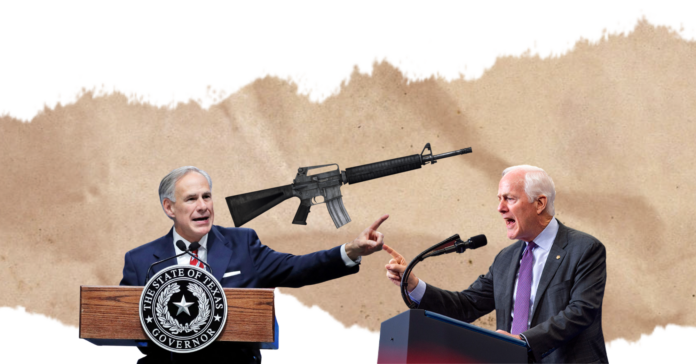 The Texas Republican Party held its convention on Friday in Houston, and it was more of a parade of grievances than any sort of announcement regarding policies. The tone of the event was one of fury and victimhood, cementing the Republican approach to the upcoming midterm elections as one laser-focused on moral panics and culture wars.

Here is a list of the things that angered the top Texas Republicans the most.

Trans Kids and Their Supportive Parents

For years now, trans people have been the beachhead that Republicans have been softening up in order to push back on social justice.

Governor Greg Abbott famously order that the Texas Department of Public Safety start investigating parents of trans children who help their children receive gender affirming care, calling the practice child abuse. The matter is still tied up in court, but other transphobic measures, such as banning trans students from participating in school sports, became law thanks to his dedicated support.

At the convention, they again accused trans people of having an abnormal lifestyle choice rather than being a marginalized gender. The Republican platform now includes prevention of teaching about gender at all, framing it as sexual content.

“The issue of gender has nothing to do with education,” said Cindi Castilla, president of the Texas Eagle Forum and who served on the party platform committee. “Education is about reading, writing, math, science, history and fine arts. Maybe some foreign language and PE. … Schools aren’t the social educators of our kids.”

The Big Lie is alive and well and living in Texas. There was a screening of 2,000 Mules, a documentary by Dinesh D’Souza, who was convicted of voter crimes before being pardoned by former President Donald Trump. The film claims to prove that there was a massive number of fake votes cast in the 2020 presidential election. In reality, nothing shown in the film is actually a crime, and it relies on spooky music and dubious witnesses to insinuate anything criminal happened.

Unfortunately, Texas Republicans have gleefully embraced the idea of widespread election fraud. A formal statement saying that the 2020 presidential election was stolen is an official plank of the platform now.

Possibly no one had a harder time at the convention than Senator John Cornyn. The senior senator is currently leading a charge in the upper chamber to pass a very small gun control bill in the wake of the Robb Elementary School Massacre. His proposals would include funding for mental health and helping states increase their red flag laws to include romantic partners aside from spouses.

It was the wrong crowd to bring such an idea up, and Cornyn was soundly booed even as he boasted about all the gun control initiatives he had opposed. At least one person The Texas Tribune spoke to at the convention said she believed the whole school shooting was a ploy by the government and didn’t actually happen. The party passed an enthusiastic platform plank asserting that people aged 18-21 were the most likely to need the protection of a weapon and the age limit on buying should not be raised. The shooter at Robb was 18.