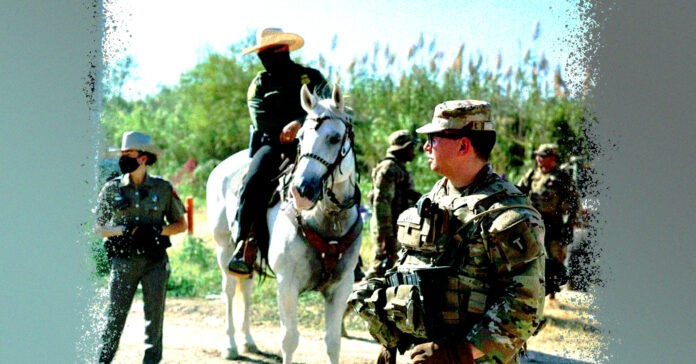 Gov. Greg Abbott’s border initiative known as Operation Lone Star continues to nurture a dystopian environment as the Texas National Guard troops watch their fellow colleagues commit suicide, and at the same time, suffer the consequences of getting their benefits slashed or their salary delayed.

In recent months, Abbott has stepped up the National Guard’s presence, enlisting around 10,000 troops for a total of 19,000 members. Military officials have acknowledged there were “approximately 150 service members experiencing pay issues,” faulting the delays to the “magnitude” of “onboarding thousands of Guardsmen,” as reported by The Houston Chronicle.

The Texas legislature provided a $300 million funding boost for the Texas Military Department’s border mission, which pales in comparison to the $3 million the state used to reimburse $4,500 per semester in 2020 and 2021 fiscal years before the cuts.

“When you cut benefits for tuition assistance by 54 percent, that’s wrong,” said Retired Command Sgt. Maj. Jason Featherston Tuesday at a news conference organized by Allen West, one of Abbott’s Republican primary challengers. “That’s not taking care of any soldier. And soldiers depend on that TA for an education, to get a better job, to further support their family.”

Abbott has been receiving criticism both from his Democratic and Republican opponents, who are highlighting the four recent National Guard suicide deaths — all tied to Operation Lone Star — and questioning the mental health support for the soldiers deployed.

The Times reported that a fifth soldier assigned to Abbott’s border initiative died early New Year’s Day after accidentally shooting himself in the head, days after another soldier had survived a suicide attempt.

Currently, Abbott has decided to ignore the criticism and solely focus on the federal vaccine mandate for military members, suing President Joe Biden.

“It is unlawful for Defendants to attempt to override the Governor’s authority to govern his troops, and then leave him to deal with the harms that they leave in their wake,” the lawsuit said.