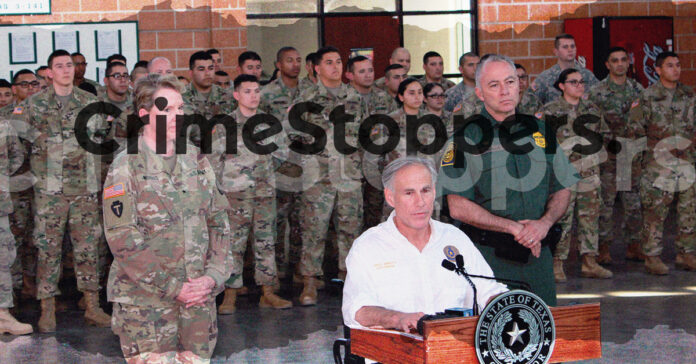 The term “deep state” became news during the administration of former President Donald Trump as he referenced the intentionally non-partisan parts of the government that were supposed to keep things running no matter who was in charge and even sometimes challenge the chief executive. In Texas, the deep state is supposed encompass law enforcement and things like the Texas Nation Guard. However, Governor Greg Abbott has increasingly sought to pull these organizations more firmly under his direct control and oversight.

The most recent and egregious example is Houston’s Crime Stoppers, the tipline service that allows residents to report criminal activity. This can be anonymously or for a possible reward. Since 1980, it’s lead to the solving of more than thirty-five thousand crimes and paid out $12  million in rewards.

The tipline was to be funded by the state budget, but Abbott surprisingly vetoed that funding as a line item. When Crime Stoppers begged Abbott to reconsider, he ended up giving them $4 million, but not from the usual source. Instead, the money was to come from an account funded by court fees. More importantly, it’s a source that the governor has direct control over.

Suddenly, the commercials for Crime Stoppers took a very political turn. Instead of the classic “Anyone with information is urged to call Crime Stoppers at 713-222-TIPS” the messages now spoke about “activist judges” letting dangerous criminals back out onto the streets. More disturbingly, Crime Stoppers is blatantly calling out specific judges, all Democrats, while lavishing praise on Greg Abbott’s crime policies.

It’s part of a pattern where Abbott uses law enforcement and military institutions to bolster his own political clout in an election year. The Texas National Guard is already deep into Operation Lone Star, the governor’s ill-fated attempt to look tough on undocumented immigrants. Under his direction, guards have been caught entrapping immigrants to charge them with crimes. Meanwhile, the work has led to several suicides and desertions among the troops.

Recently, he also pulled the Department of Public Safety into the mix by having them launch truck inspections at the southern border. Nominally, this was supposed to catch immigrants, drug smugglers, and human traffickers. Instead, it backed up shipments at the border for hours and days, ultimately costing the state around $4 billion without catching a single criminal.

There is also evidence that the legendary Texas Rangers are now little more than a tool for the governor. In addition to their absolutely abysmal record investigating political corruption, they appear to be running interference for the governor during one of the vilest breaches of public trust in living memory. When sex trafficking of minors was discovered in Texas foster care facilities, Abbott sent in the Rangers to investigate. Despite very blatant evidence, the Rangers claimed there was nothing found to incriminate the state in the crime.

That claim did not sit well with Judge Janis Jack, who openly wondered if the Rangers had been sent in to deflect and exonerate the state rather than actually investigate. Abbott has been under considerable fire for the broken foster care system, and having the Rangers clear him of responsibility would be yet another example of how he is using state government to push his own political future.