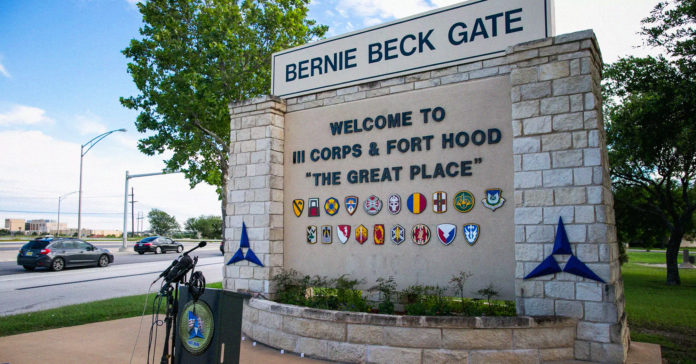 Fort Hood has been the center of a bizarre and horrific set of tragedies in 2020. The circumstances are so strange and awful that fully understanding the events can be difficult. Today, Reform Austin is attempting to put the entire chain of events into a concise timeline for our readers.

The fort is the most populous U.S. military installation in the world, with around 53,000 people currently on base and room for more than 80,000. Located halfway between Waco and Austin in Killeen, it is the headquarters for III Corps (which is part of the U.S. Army) and the First Army Division West, and it houses the 1st Cavalry Division and 3rd Cavalry Regiment. Founded in 1942, Fort Hood is also one of the last U.S. military bases still named for a confederate general.

Starting off a year that would see at least nine suspicious deaths associated with the base was the shooting of Spc. Shelby Tyler Jones. The 20-year-old cavalry scout was found at 3:05 a.m. March 1 in the parking lot of Mickey’s Convenience Store on South Fort Hood Street. Homicide detectives eventually tracked his shooting to the nearby Club Dreams strip club. According to the Killeen police department, this case was presented to a grand jury on June 11, and the district attorney declined to prosecute. No arrests have been made in reference to this case.

Four days later, Spc. Christopher Wayne Sawyer, 29, was found unresponsive in his residence. The 20-year-old mechanic was a rising star in the army, having already won the Army Achievement Medal, the Global War on Terrorism Medal, the National Defense Service Medal and the Army Service Ribbon. The Fort Hood Criminal Investigation Division immediately began looking into the cause of death, including possible foul play. However, earlier in September the Army CID ruled Sawyer’s death to be a suicide.

Another bloody shooting occurred on March 14. Spc. Freddy Delacruz, 23, Asia Cline, 22, and 23-year-old Army vet Shaquan Markell Allred were all found shot in an apartment in an apparent triple homicide. Authorities eventually linked the killings to Barnard Lnell Morrow, 21, who had fled to Mississippi. He was arrested on Aug. 28 and set to be extradited back to Texas. No motive for the murder has been revealed.

The Case of Spc. Vanessa Guillén

The most famous incident connected with Fort Hood this year is undoubtedly the killing of Vanessa Guillén, 20. The Houston native was reported missing on April 23, but her dismembered body was not discovered until June 30. Her remains were found buried along the Leon River under an elaborate cement hiding spot that had recently washed out.

The main suspect in Guillén’s disappearance is another Fort Hood soldier, Spc. Aaron Robinson, 20. Guillén had left the armory where she worked in order to visit the armory controlled by Robinson. Her last text message was a work-related inquiry to him. Later, two witnesses said they saw Robinson loading a heavy trunk onto his truck and then driving away. Robinson went to the home he shared with his girlfriend Cecily Aguilar, 22, who helped him dispose of Guillén’s remains, according to a criminal complaint. Aguilar was eventually charged with conspiracy to tamper with evidence.

On the day Guillén’s body was found, Robinson killed himself after police questioned him.

The Guillén case led to intense questioning of how things were being run on the base because of her complaints of sexual harassment.

There is speculation from Guillén’s family that Robinson killed her because she planned to report him for sexual harassment. She had told friends and fellow soldiers that she was being harassed. However, her sister has said that Guillén was reluctant to come forward because of fear of retaliation.

“My sister was too afraid to report the harassment because no one would listen to her just like the other girls from #iamvanessaguillen,” Lupe Guillen told NPR on July 3. “They take the sexual harassment, the sexual assault, as a joke. They don’t care.”

An investigation into Robinson’s behavior is ongoing, but there is little doubt that sexual harassment and assault is a tremendous problem at Fort Hood. Sgt. Elder Fernandes, 23, went missing on Aug. 19 and was later discovered dead. His death was ruled a suicide. The sergeant reported being the subject of abusive sexual contact before he disappeared.

Before Fernandes’ death, Secretary of the Army Ryan McCarthy had begun to personally address the command climate at Fort Hood. On Aug. 6, he briefed the press on the situation.

“The murder of Specialist Vanessa Guillén has become a catalyst highlighting sexual harassment and sexual assault within the military. The loss of Vanessa has been felt in our formations, particularly here and across the nation. I can personally attest to these conversations. Over the past three weeks I have traveled to Poland and Italy and in both visits, soldiers have asked about this. Vanessa’s story has served as a tipping point where survivors spoke out on social media and shared their own trauma. We must honor her memory by creating enduring change as one harassment and one assault is one too many.”

He promised a full review of the running of Fort Hood, including commitments to address sexual harassment and assault, suicides and discrimination. He acknowledged that Fort Hood is uniquely bad when it comes to sexual crimes.

“They are the highest, the most cases for sexual assault and harassment murders for our entire formation of the U.S. Army. So we are getting an outside look to help us to get to those root causes and understand so that we can make those changes with the point of emphasis being that we are going to put every resource and all of the energy we can to this entire institution behind fixing these problems.”

Several other deaths connected to Fort Hood occurred in late spring and over the summer.

In May, Pfc. Brandon Scott Rosecrans, 27, was found dead with a gunshot wound and his jeep on fire. Police eventually arrested and charged Brandon Michael Olivares, 28. No motive was given.

In June, the body of Pvt. Gregory Morales was found in a field five miles from the base thanks to an anonymous tip. The private had been missing since the previous summer and assumed absent without leave. Foul play is suspected. Morales was reinstated after the discovery of his body and is no longer considered a deserter.

In July, Pvt. Mejhor Morta, 26, was pulled from the waters of Stillhouse Hollow Lake. Autopsy reports were consistent with drowning, though the incident is still under investigation. Morta was buried with military honors in his hometown of Pensacola, Florida on Aug. 15.

The latest death is that of Pvt. Carlton L. Chee, who collapsed at the end of a 2.2-mile run. The Navajo Nation has demanded an investigation into whether malfeasance and/or negligence was responsible for the death of Chee. The Associated Press obtained information from Fort Hood officials showing that Chee was the 28th Fort Hood soldier to die in 2020.

Changes in Command and Congressional Investigation

On Sept. 2, Maj. Gen Scott Efflandt was removed from his position as top commander at Fort Hood, though he remains at the fort as commanding general for support.

The string of deaths has brought an influx of congressional attention to the base. Texas Senator John Cornyn (R) joined with Massachusetts Sens. Elizabeth Warren (D) and Ed Markey (D) in a Sept. 3 letter calling for a Senate Armed Forces Committee hearing over the tragic deaths of this year.

“We are determined to seek justice and answers for their families and to ensure the Army is implementing necessary reforms at Fort Hood, and that Congress is holding the Army accountable,” Cornyn and his colleagues said.

The House of Representatives is also demanding answers. Reps. Stephen Lynch (D-Mass.) and Jackie Speier (D-Calif.) wrote a letter to Secretary McCarthy on Sept. 8 announcing a joint congressional investigation between the Committee on Oversight and Reform, the Subcommittee on National Security, and the Committee on Armed Services Subcommittee on Military Personnel. In addition to the deaths reported above, they cited over a hundred felonies committed on the base.

“This investigation is a meaningful continuation of the oversight and investigative work Congresswoman Speier and I have been doing on the Vanessa Guillén case, and I am hopeful that its findings will better equip Congress to reform how the military handles allegations of sexual assault and harassment, as well as missing soldier cases,” stated Garcia. “It is clear there is something wrong happening at Fort Hood, and we must make sure that not one more soldier is put in harm’s way.

Garcia intends to join Speier on a trip to the base later this month. The congressional  investigation will be over and above McCarthy’s own review and will help determine whether base leadership — by omission or commission —h as allowed or enabled a culture to exist that undermines the values and traditions of the U.S. Army,” reads the statement from Speier and Lynch.

A congressional investigation was specifically requested by Guillén’s family and comes after increasing exposure over the happenings at Fort Hood. Such an investigation is likely to drag on into 2021 because of the upcoming election and the continuing COVID-19 crisis.