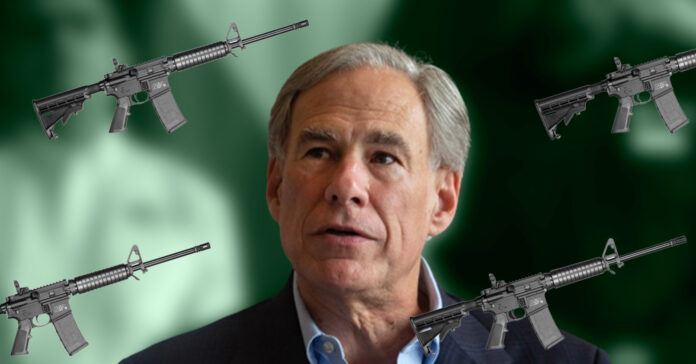 Gov. Greg Abbott is hiding behind false pretenses when it comes to raising the minimum age for purchasing an assault weapon. The Texas Governor claims it is unconstitutional, but legal experts say that’s incorrect.

“There have been three court rulings since May that have made it clear that it is unconstitutional to ban someone between the ages of 18 and 21 from being able to buy an AR,” Abbott said. “It is clear that the gun control law that they are seeking in Uvalde, as much as they want it, it has already been ruled to be unconstitutional.”

The Houston Chronicle talked to legal experts who said Abbott was actually incorrect, the Supreme Court has not yet had the final word on age restrictions for any type of weapon. The precedent shows that at least seven states have already passed legislation raising the legal purchase age for the sale of long guns.

Abbott mentions three court rulings that have “made it clear that the gun control law is unconstitutional,” however, David Pucino, deputy chief counsel for the Giffords Law Center to Prevent Gun Violence, said these cases had to do with carrying of handguns, not purchasing of assault weapons.

“An important distinction is that handguns are recognized by the Supreme Court as being the quintessential weapon for self-defense, and that is absolutely not the case with assault weapons,” Pucino said.

He believes there is a well-grounded case to be made that age restrictions are lawful and in keeping with historical laws.

“There is really strong law and strong history to support the principle that you can have these restrictions,” Pucino said. “Historically, the age of 21 was the age of majority (legal adulthood); it’s only a far more recent development that it’s been lowered to the age of 18.”

Raising the age from 18 to 21 is among the top reforms requested by families of the victims of the Uvalde school shootings, and even though Abbott is not on board, the measure shows promise of having bipartisan support in the upcoming legislative session.

A Dallas Morning News-University of Texas at Tyler poll last month showed that an overwhelming 75 percent of Texas voters — including 72 percent of Republicans — agree with this “commonsense” response.

State Sen. Roland Gutierrez, a lawyer and San Antonio Democrat whose district includes Uvalde, smashed Abbott for such a “preposterous” and “ill-founded” statement.

“If he chooses to refuse to do his job, he’s going to have to answer to voters in November,” Gutierrez said. “We’re not asking for the moon and stars here. We’re asking for an age limit for assault weapons for people under 21. Honestly, I think it should be higher, but the consensus of people polled has always been 21. And so, unlike Greg Abbott, unlike Paxton, I choose to listen to the people of Texas.”