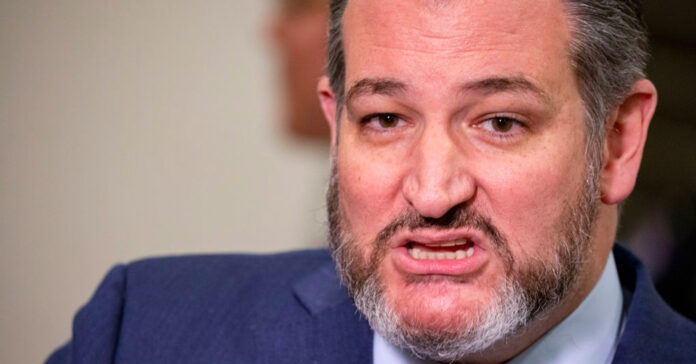 On Tuesday – just days after telling Fox News host Tucker Carlson it was a “mistake” to call The Capitol insurrection a violent terrorist attack – Senator Ted Cruz promoted a conspiracy theory that blames the Jan. 6 assault on the FBI.

The theory revolves around a man named Ray Epps – an Arizona rancher and former president of the Arizona Oath Keepers, the largest chapter of a militia group whose members took part in the Capitol attack – and how he allegedly incited the violence at the Jan. 6 riot on orders from unnamed federal officials, as reported by The Dallas Morning News.

Suspicions about Epps first appeared in mid-June on 4chan, an online message board favored by extremists. The premise of the theory is partly based on the fact that Epps was dropped from the FBI’s list of most-wanted suspects for Jan. 6 and has not yet faced charges.

Cruz has avoided an explicit embrace of these extremist claims, however, he has not been shy about asking questions that magnify such theories – that was his approach at Tuesday’s hearing.

“Sir, I’m sure you can appreciate that I can’t go into the specifics of sources and methods,” she replied.

“There are a lot of people who are understandably concerned about Mr. Epps,” Cruz said. “On the night of Jan. 5, 2021, Epps wandered around the crowd that had gathered and there’s video out there of him chanting `tomorrow, we need to get into the Capitol, into the Capitol.’ It was strange behavior, so strange that the crowd began chanting, `Fed, fed, fed, fed, fed, fed.’ Ms. Sanborn, was Ray Epps a fed?”

“Sir, I cannot answer that question,” she said.

Shortly after, the House committee investigating the Jan. 6 attack issued a statement rejecting the “unsupported claims that Ray EPPS was an FBI informant based on the fact that he was on the FBI Wanted list and then was removed from that list without being charged,” as reported by The Dallas Morning News.

There is no evidence that links Epps to the federal government and he himself has denied being “employed by, working with, or acting at the direction of any law enforcement.”

However, Cruz seemed to be very proud of himself for putting the FBI on the spot with such hard and insightful questions, that he even went on a retweeting spree to highlight the momentous event.