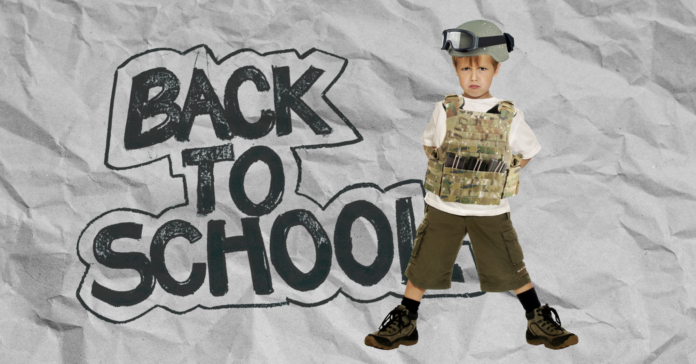 “Our children are not soldiers,” reads the closing caption in a Mothers Against Greg Abbott ad that was released this week, as Texas children get ready to return to their classrooms.

In Texas, the first day of school jitters have steered away from excitement and instead have been taken over with anxiety. With the Uvalde school shooting trauma still fresh in everyone’s minds, parents and teachers are sick to their stomachs thinking about what the upcoming school year holds in store.

According to the political action committee, MAGA, their back-to-school ad is resonating with voters frustrated by the lack of action on gun reform by Gov. Greg Abbott and the state’s Republican party, as reported by Dallas Morning News.

The ad starts with a smiling mother, helping her young son get dressed for the first day of school. As she pulls out a camera to snap his photo, you can see the boy, staring blankly ahead, dressed in full body armor and a helmet, holding a sign that reads “The First Day of School.”

The ad was posted on social media with the caption: “Our children are not soldiers, regardless of what the extreme right thinks. Whether you’re a Democrat, Republican, or neither, it’s time to come together and demand gun safety now.”

Abbott has done nothing for tightening gun laws. Texas has been the site of five deadly mass shootings since 2018 as the state has loosened gun restrictions.

In one episode, a gunman clad in tactical gear attacked congregants at a church in Sutherland Springs, killing 26. In another, a man killed 10 people at a high school in Santa Fe, Texas. And most recently, a gunman opened fire at Robb Elementary School in Uvalde, killing 19 children and 2 teachers.

Mothers Against Greg Abbott is calling for universal background checks, an age requirement of 21 to purchase a gun and mandatory waiting periods to obtain a firearm.

The group has also placed billboards around the state, highlighting Abbott’s statement after the Uvalde shooting that it “could’ve been worse.”