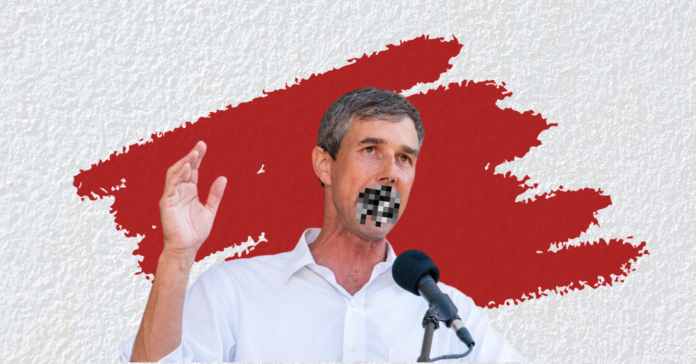 Beto O’Rourke made national news last week with an expletive-laden retort to an Abbott supporter that went viral on social media. On Thursday, O’Rourke again exhilarated a crowd of supporters in deep-red Fredericksburg by responding to a gaggle of hecklers with, “Lest we be annoyed or judge these Abbott people, let’s have a little sympathy, their candidate never shows up to talk to them.”

While this quip didn’t contain the same galvanizing F-bomb as last week’s event, the rather sizable crowd of O’Rourke supporters still erupted in gleeful cheers at the gubernatorial candidate’s brush-off.

O’Rourke is trying to capitalize on a 49-day tour of Texas towns, with an ambitious 70 public events planned in more than 65 counties that will cover about 5,600 hundred miles statewide. The tour comes amid polling that shows a tighter race with incumbent Gov. Greg Abbott than most expected.

“It’s all going to be uphill, we’re going against the odds, and 32 years since Texas elected a Democrat to be governor,” said O’Rourke at a rally in El Paso that kicked off the 49-day tour.

O’Rourke drew an exultant crowd last Saturday afternoon in Frisco, a once reliably red city he says he can turn blue, with about 2,500 attendees gathered to hear the candidate speak in the town-hall style event.

Gov. Abbott hasn’t held as many campaign events with average Texans, preferring to focus on fundraising events over retail politicking.