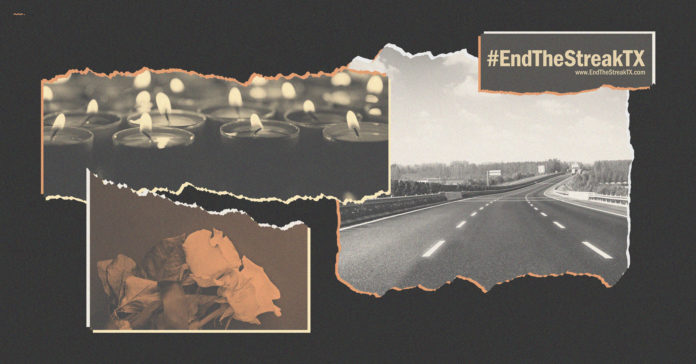 As of Saturday, it has been 20 years since Texas has gone a day without someone dying on its roads. In the last two decades, more than 70,000 lives have been lost in traffic accidents that probably could have been prevented.

“Last year, 20 Texas counties actually had zero deaths on their roadways. That tells me we can end the streak of daily deaths in Texas,” said Texas Transportation Commissioner Laura Ryan.

The Texas Transportation Commission wants to cut the number of traffic fatalities in half by 2035 and have zero deaths on Texas roadways by 2050.

It will take education, engineering and enforcement, said Texas Department of Transportation Executive Director James Bass. “That’s why this call to action to every Texan is so imperative,” he said.

To help save lives, always follow the law and buckle up when behind the wheel, watch your speed, leave your phone alone and never drive under the influence of alcohol or drugs.

TxDOT launched #EndTheStreakTX, a social media and word-of-mouth effort to encourage road safety, last year. You can join in with the #TexasTag10 challenge on social media. Just tag 10 family members or friends and ask them to post what they will do differently to avoid a fatal crash the next time they are behind the wheel.

Speeding, distracted driving and failure to stay in a single lane are leading causes of traffic deaths, but it’s not just motorists who are dying.

“Almost a third of Texans who died in traffic crashes last year were folks out for a jog, or a walk or a simple bike or motorcycle ride,” said Texas Transportation Commissioner Robert C. Vaughn in a video marking the grim anniversary.

“Twenty years of pain … 20 years of heartache for the families left behind,” Commissioner Laura Ryan said. “It’s a shared responsibility, it’s literally in our hands, let’s not let another Texas family down.”