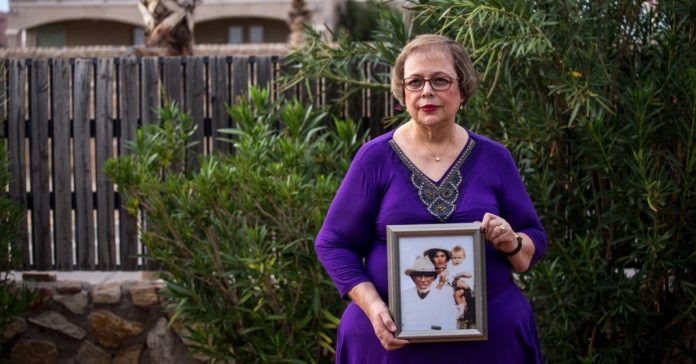 Growing up in Monahans in the 1960s, Arlinda Valencia said she was used to hearing about the valor of the Texas Rangers in school and on television.

“I grew up watching The Lone Ranger,” she said, referring to the 1950s Western drama series. “The Lone Ranger was a hero, and that’s what we grew up with, thinking that the Texas Rangers were heroes.”

But when Valencia learned from a relative that the Texas Rangers took part in killing her great-grandfather, Longino Flores, and 14 other unarmed Tejano men and boys in the 1918 Porvenir massacre, she slowly began to reevaluate her long-held perception of the law enforcement agency.

Now Valencia, 68, is spreading word of the massacre in hopes of shedding light on a piece of Texas history that historically has not been given widespread attention: the Texas Rangers’ racist and xenophobic past. She developed a website that details the massacre and has organized screenings of “Porvenir, Texas,” a 2019 documentary about the killings.

This year’s prevalent and ongoing anti-police brutality protests have added resonance to Valencia’s cause as calls have surfaced for the Texas Rangers name to be stricken from the modern-day Texas Department of Public Safety investigative agency, North Texas’ Major League Baseball team and college mascots. Meanwhile, historians and public officials are at odds over how to reconcile the law enforcement unit’s racist historical acts with its long-running exalted place in Texas history and culture.

The Porvenir massacre is one of many past acts of violence committed by the Texas Rangers against people of color in the state, including indigenous Texans, Black Texans and Tejanos, or Mexican Americans from the South Texas region, from the 19th century through the 20th century.

As a law enforcement agency, the Rangers were unofficially founded in 1823 for the purpose of a “punitive expedition against a band of Indians,” according to the Texas State Historical Association. They continued to drive indigenous people from their homelands during the Cherokee War in 1839, as well as the Council House Fight and Battle of Plum Creek against the Comanches in 1840.

In the mid-1800s, the Rangers captured runaway enslaved Black people seeking freedom in Mexico through the Callahan Expedition, according to the Texas State Historical Association.

In 1918, the Rangers slaughtered Tejanos during the Porvenir massacre, said John Morán González, a literature professor and the director of the Center for Mexican American Studies at the University of Texas at Austin. According to the Texas Observer, the massacre occurred when a group of Rangers, U.S. Army soldiers and ranchers arrived at the Porvenir village near El Paso in pursuit of revenge for a series of cattle raids by Tejanos along the border. A 2018 El Paso Times article reported there was no evidence implicating the Porvenir villagers in the cattle raids, but the Rangers nevertheless separated 15 men and boys from their families and executed them.

Decades later, in the mid-1950s, Rangers helped the Texas governor, Allan Shivers, resist a federal court order for Mansfield High School to desegregate, according to the Texas Historical Association.

The Department of Public Safety investigative agency did not directly comment on calls to change its name, but wrote in a statement that it is “aware of recent stories about the history of the Texas Rangers and defers judgment on the veracity of those depictions to Texas historians.”

“The modern-day Texas Rangers are comprised of principled men and women of great skill and integrity who are fully committed to the rule of law,” it said in a statement.

Doug Swanson’s 2020 book “Cult of Glory: The Bold and Brutal History of the Texas Rangers” prompted the removal of a statue of a Texas Ranger from Dallas’ Love Field Airport in June by city officials.

Meanwhile, progressive activists have petitioned for the Texas Rangers baseball team to change its name.

And ahead of the DPS investigative unit Texas Rangers’ bicentennial celebration in 2023, historians and activists are advocating for a more comprehensive portrayal of the law enforcement entity in the public eye.

Historians like González believe the Texas Rangers name should be retired entirely from the modern agency, the baseball team and local mascots, like that of San Antonio College, which decided to change its mascot’s name last month, according to KENS. Along with Benjamin Johnson, a Loyola University Chicago history professor, González co-founded Refusing to Forget, an organization that hopes to educate people about state-sanctioned violence against Tejanos in the early 20th century.

“I just think it’s impossible to talk about this particular organization and use the word ‘ranger’ without invoking this 200 year-old actual history of violent policing, especially against communities of color,” Johnson said.

Patterson, 73, said he has seen nationwide public perception of the Rangers move “like a pendulum swing,” from glorifying the Rangers to demonizing them — both of which he believes are misguided approaches. Instead of taking down statues and changing names, Patterson said, Texas historians and activists should portray the multidimensional history of the Rangers, which he said was his goal when he worked on the “Porvenir, Texas” documentary.

“We have to tell the story, the complete story, warts and all, good, bad and ugly, and that’s not what’s being done,” he said.

The role of media

González, 54, remembers watching Walker, Texas Ranger in the early ’90s — a television series starring Chuck Norris and one of many examples of mass media that he believes has exalted the Texas Rangers and gifted them with an almost mythical position in Texas culture.

As a child growing up in Houston, Johnson, 48, recalls reading books about the Rangers that would lionize them, “telling these stories of heroism and bravery and apprehending various criminals and fighting various people” while ignoring the carnage.

“To put it more simply, that glorification of the Rangers, it’s built on a lot of blood,” said González, who is half-Tejano and was raised in Brownsville.

Byron Johnson, the director of the Texas Ranger Hall of Fame and Museum, a state-designated historical center, said there are thousands of books, hundreds of films and a handful of television programs about the Rangers, making them a “legendary” force in Texas history and culture.

But the museum has been the subject of controversy among historians and officials who are concerned it only presents the positive aspects of the Texas Rangers.

“They lionize some of the murderers that our scholarship has looked at and that have come to light in recent years,” Benjamin Johnson, the history professor, said. “They simply ignore critical takes so you can’t find any critical books, of which there have actually been a lot for decades and decades, [in the museum].”

Swanson, the journalist and author, agreed. He said it’s important to acknowledge the Rangers’ positive contributions to Texas — such as fighting the Ku Klux Klan and saving Texans from lynch mobs. But, Swanson said, the museum ignores the perspectives of Native Americans, Hispanic Texans and Black Americans and omits the Porvenir killings from its website.

Byron Johnson, the museum’s director, said its current and rotating exhibits have covered the Porvenir massacre and women, Hispanic people and Native Americans in the Texas Rangers.

“However, exhibit space and resources have limited what needs to be covered in the exhibits,” he wrote in an email.

He added that in March, the museum approved a contract to review its programs and consider expanding its exhibits that will “involve a diverse group of citizens, historians, authors and Texas Rangers.”

Valencia, the great-granddaughter of Longino Flores, said the museum needs to hold itself accountable for portraying an accurate history of the Rangers.

“I think they should keep the museum, but they need to put the people that are responsible for all these deaths, they need to fess up and there needs to be in that whole thing a section of the dark past,” she said.

Benjamin Johnson said that Refusing to Forget wants Texas education officials to incorporate more events that happened between 1910 and 1920 along the Texas-Mexico borderlands into Texas history classes that are required for fourth and seventh graders. The Porvenir massacre is currently not explicitly mentioned in the curricula.

“We would like these episodes to be represented,” he said.

He and González want Texas history curriculum to include more perspectives on the Rangers.

“[State history education] has been part of the process of glorifying the Rangers,” González said. “Even starting at those early moments where the true history of the Rangers and their role in promoting white supremacy has to be made clear.”

But it is up to individual school boards and teachers in the state to decide what aspects of Texas Rangers to include and what history books to use.

Pérez added that it is possible that certain teachers in conservative areas may choose to teach lessons on the Texas Rangers that present them in a more heroic light than others.

“I think that in fourth grade I can almost guarantee everyone is taught like [the Rangers] are heroes or it’s just not addressed, perhaps because of the [students’] age,” she said. “Whereas in seventh grade, it’s, it’s a bit more likely that a teacher feels comfortable teaching both perspectives.”

Pérez said the State Board of Education approved a Mexican American studies high school elective course in 2018 that she says paints a more accurate portrait of the Texas Rangers than the fourth and seventh grade curricula. Recommended lessons for the course include one on the Porvenir killings. But Pérez said offering Mexican American studies as an elective in high schools is not enough — she wants to see it become integrated into general history curricula.

“I’m not a fan of making Mexican American studies an ‘other’ versus mainstream history,” she said.

The modern Texas Rangers, an investigative agency within the state’s Department of Public Safety, evolved from the historical police force but no longer carries out the same duties. Today, Rangers focus on investigations as a unit within DPS.

Swanson said there is still much progress to be made in terms of diversifying the force and reckoning with its complex history. Of the agency’s 157 members, there are currently seven Black, 31 Hispanic and four women rangers, according to a statement from the agency.

“As late as the 1960s, 1970s, there were many Rangers — high ranking Rangers — who were quite hostile to the idea of having women and Blacks [as members], especially,” Swanson said.

Swanson said the Rangers were “quite tardy” in diversifying their ranks.

“The first African American [Ranger] was in 1988 and that was only after an NAACP complaint,” he said. “The first two women were in 1993 and that was when Ann Richards was governor and so she pushed very strong for that. The first Hispanic or Latino Ranger of the modern era was in 1969.”

The modern Texas Rangers said they value diversity in the agency.