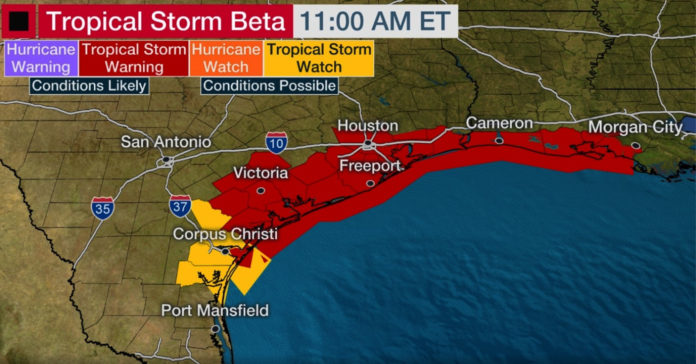 Coastal flooding is already being seen in some areas along the Texas coast as Tropical Storm Beta moves closer. The storm isn’t expected to have the punch of Hurricane Harvey, but it will bring heavy rain and dangerous storm surges.

Flash flood watches and severe weather threats are in effect for Southeast Texas and coastal communities. Storm surges of two to five feet are predicted, and southeast Texas could see heavy rain of five to 10 inches through Friday. Beta’s maximum sustained winds have been 50 miles per hour so far.

“As Tropical Storm Beta approaches the coast, I urge Texans in the path of the storm to remain vigilant and take necessary precautions to keep themselves and their loved ones safe from flooding, storm surge, and other impacts from this severe weather,” said Gov. Greg Abbott.