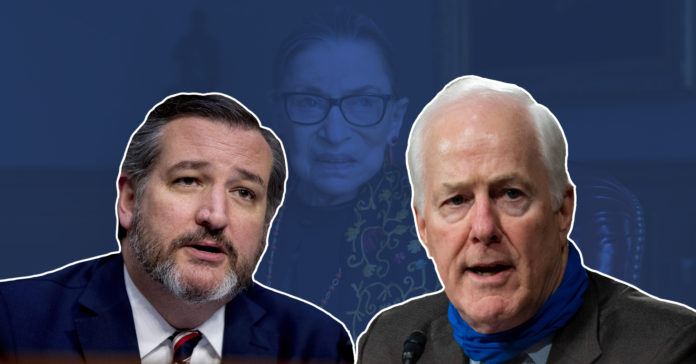 In a huge reversal of their 2016 positions, Texas Senators Ted Cruz (R-Houston) and John Cornyn (R-Houston) say they support moving forward with a replacement for the late Supreme Court Justice Ruth Bader Ginsburg before the end of the year. Both were signing a different tune four years ago when Justice Antonin Scalia died in the last year of Barack Obama’s presidency.

“There should not be a hearing in the Judiciary Committee for anyone that the president nominates,” Cornyn said in 2016. “It’s not about the personality, it’s about the principle … that it’s up to the American people in this next election, no matter who they choose, to make the nomination for this important seat on the Supreme Court.”

Cruz, who is on President Donald Trump’s list of potential Supreme Court nominees, has also tossed aside his strong conviction of four years ago.

“We cannot have Election Day come and go with a four-four court,” Cruz said during an interview with Fox News’ Sean Hannity. “A four-four court that is equally divided cannot decide anything. And I think we risk a constitutional crisis if we do not have a nine-justice Supreme Court, particularly when there is such a risk of a contested election.”

The hypocrisy isn’t lost on Democratic senate nominee MJ Hegar, who is challenging Cornyn in November.

“By flagrantly violating precedent they themselves championed when it served their agenda, Senator Cornyn, Ted Cruz, and Mitch McConnell are showing the American people once again that they lack the integrity to act in the best interests of our country,” Hegar said in a statement. “Let me be very clear -— the American voters know the Supreme Court is on the ballot. We will determine who we are as a country on November 3rd, and it should be the President and Senate we elect who select a qualified individual to serve a lifetime appointment.”

To block confirmation, Democrats will need to convince four Republican Senators to break rank. As of Sunday, only two Republicans had expressed willingness to defect.

Ginsburg’s vacancy comes as the high court is ready to reconvene and take up cases with Texas ties, including Texas Attorney General Ken Paxton’s effort to repeal the Affordable Care Act and Trump’s refusal to count undocumented immigrants in the U.S. census, which could impact redistricting and cost Texas representation in Congress. There is also concern that Roe v.Wade, which struck down Texas’ abortion ban in 1973, and LGBTQ rights are in danger.

On Monday, Trump revealed he will announce his pick to replace Ginsburg on Friday or Saturday.

Trump has reportedly narrowed his list of potential nominees to five people, including Judge Amy Coney Barrett of Indiana, who is believed to be the frontrunner. Judge Barbara Lagoa of Florida and North Carolina’s Judge Allison Jones Rushing of the 4th U.S. Circuit Court of Appeals are also said to be on the short list.

If Trump is successful in pushing through his nominee, the makeup of the court will tilt 6-3 in favor of conservatives for many years to come.