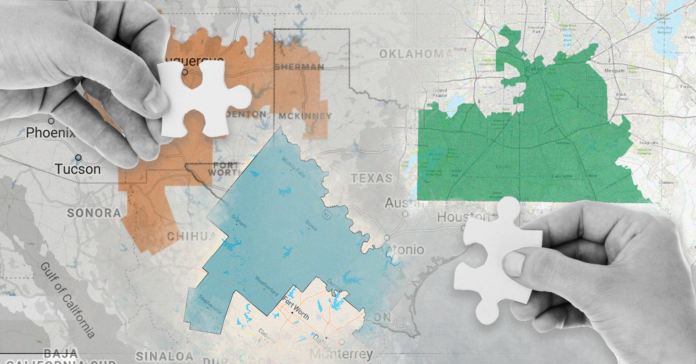 After nearly 15 hours of debate that ended early Wednesday morning, the Texas House passed a proposal for new political boundaries for itself along near party lines in the middle of the night. The plan, which members of the public can view here, aims to shore up the Republican majority for the upcoming decade. Trump won 85 of the redrawn Texas House districts leaving 65 which were won by Joe Biden. Currently, the House is represented by 83 Republicans and 67 Democrats where Trump only won in 76 of the House Districts.

Under the redrawn map, there are three districts held by Democratic incumbents where President Trump performed better than Biden: House District 31 (Guillen) at +25 Trump, House District 80 (Tracy King) at +4.3 Trump, and House District 52 (Talarico) at +4.7 Trump.

Regarding the racial composition of districts, 92 are majority Anglo, while 49 are majority Hispanic, seven are majority Black, and one is majority Asian, the newly added House District 76 in Fort Bend County. This represents an increase of one majority Hispanic district and an increase of three Anglo-majority districts as compared to current lines. This was calculated using Census data regarding voting age population (VAP). Because this would include non-citizens, it is not the most accurate representation of the demographics of the electorate, a criticism lodged by Democrats at Chairman Todd Hunter (R-Corpus Christi), who also authored House Bill 1, the proposed Texas House map.

See the political performance data of all 150 districts in spreadsheet format here.

Under questioning by Democrats, Hunter told them there was an effort to prevent the “packing” and “cracking” of minority communities in districts, but he acknowledged both parties submitted plans that had done that. He also told them he prioritized political performance for incumbents over keeping communities of interest together. This was the case for nearly all the members except for a select few, the so-called losers. Attempts to rectify potential incumbent losses in the map as passed by the House Redistricting Committee mostly failed on the House floor.

Redistricting is a Bloodsport

Throughout the night, it became clear that redistricting is intensely personal and cutthroat for all involved.

For example, freshman Tarrant County state Rep. Jeff Cason (R-Bedford) was redrawn into a strongly Democrat district, the only incumbent Republican to have “lost” in the redistricting process run primarily by Republicans. Biden won the redrawn district by 24 points in 2020. Cason attempted to make a change, which would have made the open House District 93 left by Rep. Matt Krause (R-Fort Worth), who is running for Attorney General, into a Democrat leaning seat while making his seat in House District 92 safe for a Republican.

Fellow Tarrant County Rep. Giovanni Capriglione (R-Southlake) criticized the change, saying it split cities and other communities of interest. State Rep. Jasmine Crockett (D-Dallas) jumped at the chance to highlight the double standard of Republicans upset about splitting communities of interest when it affects Republican incumbents but not worried about splitting them in Democrats’ proposals to protect the voting strength of minority populations. The amendment was rejected in the most lop-sided vote of the night, 17-119. The map, as it stands now, makes the open seat safe for a Republican and essentially gives up Cason’s seat for a Democrat.

In another instance, the most tense moment during the debate came when state Rep. J.M. Lozano (R-Kingsville) presented a late-filed amendment splitting up Cameron County House Districts 38 and 37 by adding heavily Republican Willacy County to the latter. The redrawn District 37 is now a district where Biden won by 2.1 points. It received immediate pushback from the members involved, Eddie Lucio III (D-Brownsville) and Alex Dominguez (D-Brownsville), who claimed this decreased the representation of Cameron County and was not discussed with the Rio Grande Valley delegation prior to the floor debate, as per House tradition.

Upon questioning from Lucio and Chairman Rafael Anchia (D-Dallas), Lozano did not disclose who pushed for the changes of splitting up Cameron County, making it vulnerable to claims of violating the County Line Rule, and anchoring District 37 in Harlingen. He only mentioned there were six people, including a friend of his that may run, who wanted a more competitive district in Cameron County after hearing about upcoming vacancies. Lucio has already announced he will not seek re-election and Dominguez is privately considering a congressional run.

When asked why he pushed this change, Lozano said “because it’s a redistricting year and I can do this as a member of the Texas House.” Anchia responded, “So it’s pure power of a politician from Austin over the objections of the RGV delegation.”

According to Quorum Report Editor Scott Braddock, Gov. Greg Abbott was behind the proposal to create a Republican South Texas district in Cameron County. His chief of staff even whipped GOP votes to get it passed. The amendment was narrowly adopted 72-70 after verification.

The Effect of Vacancies

For both Cason and Dominguez, the common thread is their district being adjacent to a vacancy, which House Republicans used to great effect to maintain their majority. Crockett tweeted soon after the Lozano amendment “if you aren’t coming back, don’t announce that until redistricting has concluded! Redistricting has been especially brutal for vacated seats!”

The vacancy in House District 114 left by John Turner (D-Dallas) in Dallas County allowed the rest of the Democrat Dallas delegation to move their districts around so that they are compact, keep communities of interest together, and remain safe Democrat seats. District 114 was also moved so that under the new map, Rep. Victoria Neave (D-Dallas) is the incumbent while House District 107 is now left open as a safe Democrat seat, which Biden won by 28 points. The two Dallas County swing districts held by Republicans, Morgan Meyer in House District 108 and Angie Chen Button in House District 112, were made safer for Republicans but are still competitive. Trump won both these redrawn seats within a percentage point. Previously, these seats under current lines were won by Clinton in 2016, Beto O’Rourke in 2018 and Biden in 2020.

In Collin County, the vacancy in House District 70 left by Scott Sanford (R-McKinney) allowed the other Collin County Republicans to have their districts made safer while giving District 70 up as a Democrat vote sink, where Biden won it by 11 points in 2020. Reps. Matt Shaheen (R-Plano) and Jeff Leach (R-Plano) benefitted the most as Districts 66 and 67 went from swing districts to Republican leaning districts where Trump won them by 7.9 and 8.8 points respectively.

In Bexar County, the vacancy in House District 118 left by Leo Pacheco (D-San Antonio) that is set to be filled by a Nov. 2 runoff between a Republican and Democrat was made much more competitive. Biden only won the redrawn District 118 by 2.7 points.

Democrats’ efforts to put the Texas House map under federal district court review or have the Secretary of State conduct a racial impact study of the districts failed. Attempts to create new minority opportunity districts in Brazoria County, Bell County and East Texas were also voted down. Some attempts to protect existing minority majority districts from losing minority voting power succeeded while others failed.

The rushed nature of the redistricting process as well as the lack of transparency was a common thread in Democrats’ critique of the process.

It is expected by members of both parties that this map will be subject to litigation, and as such, answers by Republicans and much of the questioning and statements by Democrats as well as some of their amendments were carefully crafted for the record.

The Texas House map now heads to the Senate, which is expected to vote on it before the end of the session next week. It has already been referred to committee and is scheduled for a hearing on Friday.