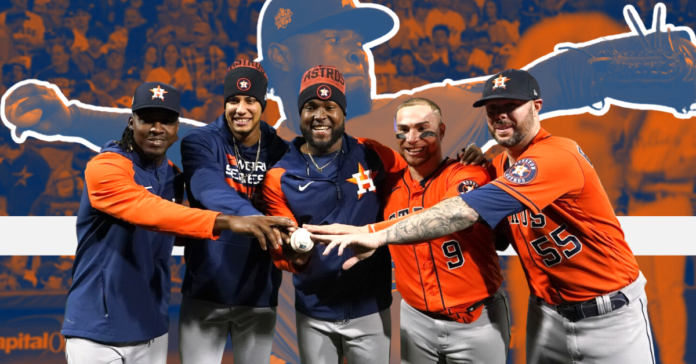 The Houston Astros pitching led by starter Cristian Javier threw only the second no-hitter in the 118-year history of the World Series Wednesday night in Philadelphia. The 25-year-old Javier threw six innings of no-hit ball, going for nine strikeouts in just 97 pitches, and was the third-longest start in World Series history without yielding a base hit.

Bryan Abreu, Rafael Montero, and Pressly followed him in the seventh, eighth, and ninth hitless innings for the first combined no-hitter in postseason history. The Astros arms totaled 14 strikeouts and three walks, and the historic win made certain the series will be coming back to Minute Maid Park this weekend.

After the game, the four pitchers and catcher Christian Vázquez also signed a ball headed to the Hall of Fame. Vazquez, who called the historic game last night, was not even a member of the club until the week of the trade deadline in July and became only the second catcher to do so.

The last time a no-hitter was thrown in the series? On October 8, 1956, Don Larsen pitched the first no-hitter in the World Series, throwing a perfect game in Game 5 for the New York Yankees against the Brooklyn Dodgers at Yankee Stadium, with the legendary Yogi Berra calling the game from the catcher’s position.

In a postgame interview on the field last night Javier said his parents predicted Tuesday night he was going to throw a no-hitter. The young righthander from the Dominican Republic said his father, Cecilio Javier, arrived in the U.S. on Tuesday and it was the first time his dad saw him pitch.

Javier, part of the young core of Astros arms, said “I just came out holding onto God, trying to be positive, trying to attack the strike zone,” he said via a translator. “Thanks to God I was able to accomplish that.”

Known to his teammates as “El Reptil” — The Reptile — he demonstrated his cool under pressure which earned him that nickname. He dominated the hard-hitting Phillies, who had been 6-0 at home this postseason.

Signed by the Astros as an international free agent in 2015, he made his MLB debut in 2020. During 2022, including regular and postseason, he started in two combined no-hitters, the first player ever in MLB history to accomplish the unthinkable feat. On June 25th of this year Javier and the bullpen no-hit the New York Yankees in Yankee Stadium.

Fortunately, unlike in Game 3, Javier and the bullpen were the beneficiaries of a breakout inning by the Astros bats, after going more than 15 innings without producing a run. In a seemingly endless fifth inning, Astros hitters put up 5 runs after being shut out just the night before.

Alex Bregman, Kyle Tucker, Yuli Gurriel, and Jordan Alvarez all drove in runs, and Jeremy Peña, the team’s AL Championship Series MVP, became only the second rookie in World Series history to get a base hit in his first four games of the fall classic, per Fox Sports broadcasters, as he lined a hit up the middle for a single in the inning.

In doing so he tied Los Angeles Dodger great Maury Wills, who also got hits in his rookie season during the 1959 World Series against the Chicago White Sox.

Tonight, just two days removed from seeing their young pitcher Lance McCullers give up a record five home runs in a World Series game, the young nucleus of bats and arms turn once again to the future Hall of Famer Justin Verlander in a pivotal Game 5.

Game 1 and Game 3 went very similarly for that reason, with the Astros barely resembling the club that stormed into the World Series unbeaten in the postseason.

McCullers, amid internet-wide speculation that he was inadvertently tipping the Phillies off as to what pitch he was about to throw, maintained in vain that he didn’t think he was, and said he simply got beat.

While he is the odds-on Cy Young award winner, his postseason has not gone like his historic regular season. In Game 1, Verlander’s best pitches were off-target and ineffective, and the Phillies batted them around the park like pinballs. While holding the all-time postseason strikeout record at 219, he is 0-6 as a starter in the World Series.

But Verlander has been truly brilliant at times this postseason, like in his Game 1 of this year’s ALCS against the Yankees: six innings, one run, 11 strikeouts, pitching like the veteran ace that he is on that penultimate stage.

But Dusty Baker is known as a “player’s manager,” often to a fault. He let Verlander and McCullers languish in what were inferior starting efforts.

Yet, Baker seemingly couldn’t wait to pull Javier after his six hitless innings, despite him being just under the 100 pitch count used by modern managers to limit the stress to starting pitcher’s arms.

By contrast, the Game 2 performance by Framber Valdez, and last night’s Game 4 gem, were much more familiar to Astros fans.

If the Astros can manage to get a win tonight, they will come home to Houston needing only one win in the two games currently scheduled for Saturday and Sunday if necessary.

A Game 7 would likely see a pitching staff committee with all hands on deck with the exception of Verlander and Valdez. Baker did say he felt good about removing Javier after six innings of work last night, as he could foresee pitching him in three or four innings if a seventh and deciding game was needed.

Valdez is the projected starter for Game 6 on Saturday night and hopes to repeat his Game 2 performance that saw him dominate the Phillies bats in Game 2.

Barring another rainout in Philadelphia tonight, Game 5 will begin at 7:03 pm CDT on Fox, and will also be broadcast on any Astros radio network stations.