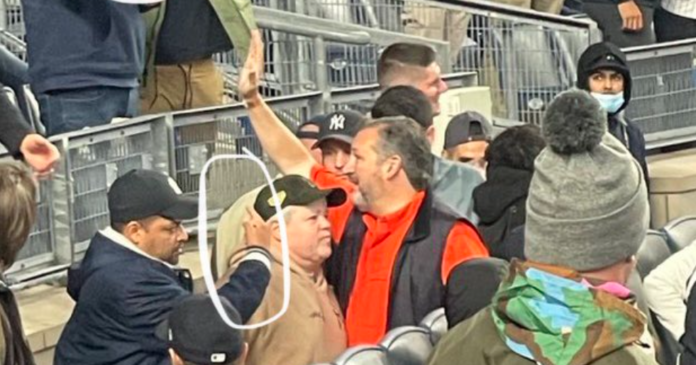 As the Astros were looking to clinch a trip to the World Series in Game 4 in New York Sunday night, Ted Cruz, GOP senator, was presumably waving to Astros fans. As their team was getting swept out of the playoffs Yankee fans decided to tell him what they thought of him.

The often heckled Texas GOP Senator was seen in an image shared on Twitter by Jesse Angelo of Vice media. An account holder named Wu-Tang is for the Children reposted the picture of a fan who is shown giving him a big thumbs down, and at least three Yankees fans are flipping him off with their middle fingers.

In response to the photo, Astros fans back in Texas piled on Cruz in multiple hilarious tweets about the socially and politically awkward Cruz. They posted comments such as “Literally the only time I’ve liked Yankees fans in my life” and “That’s also the likely response he gets at his local supermarket.”

One particularly astute poster said, “You can blame rural Texas for him, not Houston.” Another poster commented “Right there with you. Some things are more important than baseball. Not putting up with a guy like Cruz is one of those things.”

As arch-rival fan bases, Astros and Yankee supporters don’t have much in common. But as another poster put it “I hate Yankee fans but today is an exception! Heroes every damn one!”

Another wrote “Has anyone checked on Texas? Storm? Major catastrophe? @tedcruz is always the first one out when shit goes down. Check on your friend’s folks.”

Cruz is still remembered best for his response to the deadly winter storm in 2021. As fellow Texans died as a result of the failed GOP-built state power grid, Cruz and his family fled to Cancun Mexico, leaving the family poodle, Snowflake, behind in Houston.