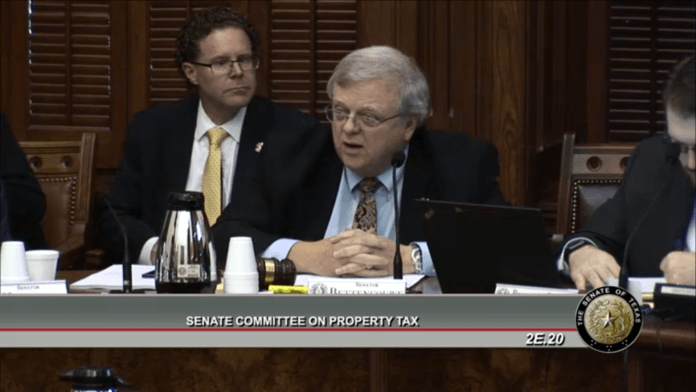 (Pictured: Paul Bettencourt)
In the State of the State Address, Governor Abbott listed property tax reform as one of his six emergency items for the Legislature to address. Subsequently, Governor Abbott hailed identical bills filed in the House and the Senate (HB2 & SB2) which on paper address the problem of property taxes. The most notable section of both bills is the reduction of the rollback rate, otherwise known as a property tax revenue cap, from 8 percent down to 2.5 percent.
SB 2 began moving through the newly-created Senate Property Tax committee last Wednesday.  Chaired by Senator Paul Bettencourt (R-Houston), and comprised of four other members, Senators Angela Paxton (R-McKinney), Kelly Hancock (R-North Richland Hills), Brandon Crieghton (R-Conroe), and Juan “Chuy” Hinojosa (D-McAllen).
Overall, the Wednesday marathon hearing took 11 hours of public testimony. Based on the feedback from the hearing, there were amendments made to SB 2 and heard in a second hearing Monday afternoon. Chief among the amendments is a provision allowing taxpayers from taxing districts that bring in $15 million or less revenue to opt-in to having the rollback rate down to 2.5%. Previously, the rollback rate under this bill would only apply to taxing districts bringing in more than $15 million. Another amendment by Chair Bettencourt would prohibit reducing the pay for first responders due to any budget pressures by SB 2. This will squeeze municipal budgets from both ends. Senator Hancock offered another amendment changing “rollback tax rate” to “voter-approved tax rate.”
After these amendments were adopted, SB 2 was approved in committee, with four votes in favor and one voting “present, not voting,” which advances the bill to the full Senate for consideration.
Senator Hinojosa, the lone Democrat on the committee and the only member to not vote in favor of the committee substitute, conceded there are many important reforms in the bill, but still felt the 2.5 percent cap is too low and does not provide enough flexibility to local governmental entities. He added that state funding for education needs to increase for real property tax relief to occur because the declining state share is the biggest driver to rising property taxes.
Senator Hancock responded, observing how SB 2 would allow the state to slowly stop the growth of property taxes and that the revenue trigger will allow the state to get back to parity on school finance, implying that school finance fix will not be immediate.
SB 2 takes effect on January 1, 2022, well after the next election and the next legislative session. It will, therefore, provide no relief to property taxpayers in the short term; and possibly over the long-term. Unless and until there is a comprehensive approach to reforming school financing, there is little chance property taxes with actually go down for any Texas homeowners.