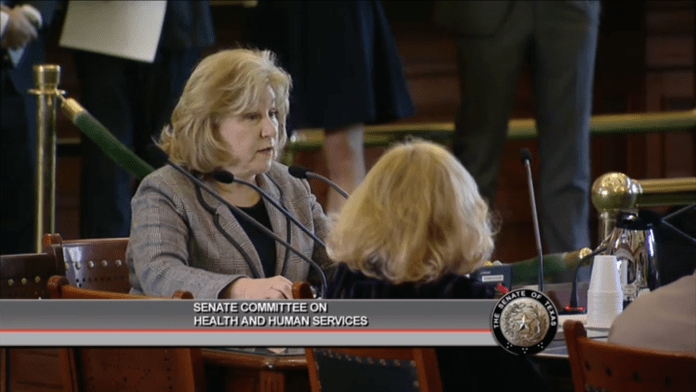 (Pictured: Jane Nelson)
One of the emergency items Governor Abbott laid out in his 2019 State of the State Address was mental health care, in particular for public school districts, tying it to the issue of school safety. Governor Abbott hailed Senate Bill 10 by Senator Jane Nelson (R-Flower Mound), which establishes a Texas Mental Health Care Consortium to collaborate on statewide mental health needs.
SB 10 was heard in the first committee meeting of the Senate Health and Human Services Committee on Tuesday, February 12. Chaired by Senator Lois Kolkhorst (R-Brenham), and comprised of eight other members, Senators Charles Perry (R-Lubbock), Dawn Buckingham (R-Lakeway), Donna Campbell (R-New Braunfels), Pete Flores (R-Pleasanton), Nathan Johnson (D-Dallas), Borris Miles (D-Houston), Beverly Powell (D-Burleson), and Kel Seliger (R-Amarillo).
Nelson, a former chair of the Senate Health and Human Services Committee, introduced the committee substitute bill saying it focuses on at-risk children and adolescents. She testified her inspiration to file this bill was the Santa Fe shooting last May. “It’s horrifying to me that children in our schools need to worry about things like that.”
Nelson continued her testimony explaining the goals of Consortium will include improving early identification and access to mental health services, addressing psychiatry workforce issues, promoting and coordinating mental health research, and strengthening judicial training on juvenile mental health.
The consortium would consist of twelve health-related institutions of higher education, the Texas Health and Human Services Commission (HHSC), at least three non-profit organizations that focus on mental health care and any other entity the executive committee of the consortium considers necessary.
The fiscal note of the bill by the Legislative Budget Board reports the Senate base budget currently has $50 million in General Revenue for each year of the 2020-2021 biennium to cover the number and amounts of grants distributed by the Consortium’s executive committee to health-related institutions of higher education.
Invited testimony was provided by University of Texas System Vice Chancellor of Health Affairs, Dr. David Lakey, who told the committee net savings will come to the state in the long-term through earlier intervention and collaborations between academic centers, state health agencies, schools, and health systems. According to Senator Nelson, $7 billion is currently spent on mental health across all state agencies.
Dr. Andy Keller, CEO of the Meadow Mental Health Policy Institute, also provided invited testimony. He clarified the purpose of the bill is to help medical and mental health professionals treat children as soon as possible.
Nelson urged committee members on the importance of identifying mental illness early and treating “it without stigmatizing it just as we would any other physical condition.”
Senators Kolkhorst and Johnson both expressed apprehension on the emphasis on psychiatry in the bill and pointed to a possible repercussion of the policy of over-prescribing drugs. Both experts, Dr. Lakey and Dr. Keller, sought to alleviate their concerns by saying telemedicine and telehealth is covered in this bill, the latter covering non-physicians like social workers and psychologists. They added training will occur on a broader array of interventions besides prescription drugs.
Nelson’s bill is expected to create mental health hubs in every region of Texas, starting at every medical school in the state. 30 states have done similar access programs to Senate Bill 10, which make psychiatrists available for consultation to pediatricians who are often the first to encounter children with mental health issues.
The bill passed the committee with eight ayes and zero nays. The ninth senator, Pete Flores, was absent at the time of the vote due to other committee commitments, but was present during the invited testimony on the bill.
Notably, SB 10 has all 31 Senate members signed on as joint authors.
*The article has been updated to include the votes of Senators Miles, Johnson and Perry, all of whom submitted motions in writing requesting to be shown voting aye on CSSB 10, per the minutes of the meeting. The three senators were reported previously to have been absent during the record vote.