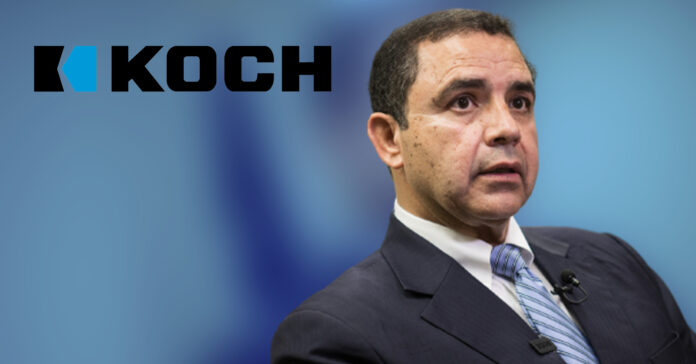 United States Representative Henry Cuellar (D-Laredo) found himself once again in a foreign policy mess this week. This time it involved a donor of his: Koch Industries.

The mega-conglomerate is the largest privately held company in America. It is also one of the most active political forces in the country, having been founded by a charter member of the right-wing conspiracy group the John Birch Society. Koch money funds both political candidates and right-wing outreach projects like Prager U and various think tanks that dismiss climate change science.

From that resume, it’s not surprising that Koch generally backs Republican lawmakers. However, there are a tiny handful of Democrats that receive Koch Industries’ money. Cuellar is one of those, having received $8,500 this election cycle. According to Open Secrets, Cuellar is a regular recipient of Koch money, having netted $56,500 since 2006.

That’s become a problem since Koch has refused to stop doing business in Russia. Many companies have suspended operations or cut ties in the country since they invaded Ukraine under false pretenses of chemical weapons and “denazification” of their eastern neighbor. Thus far, the United States has retaliated against the aggression through mostly economic means, including solidarity with the business community.

In a statement last week, Koch Industries’ glass manufacturer Guardian Industries announced that it would keep its two factories in Russian running as usual. Its statement said the company would not “walk away from our employees there or hand over these manufacturing facilities to the Russian government so it can operate and benefit from them.”

Nonetheless, the move to stay in operation in Russia has added a new level of toxicity to Cuellar’s political career. A spokesperson for the representative told CNBC that “Congressman Cuellar has not received any money from the Koch Brothers this year and will not accept any future campaign contributions until they disassociate from Russia.”

Earlier this year, Cuellar’s office was raided by the FBI. Though law enforcement has been tight-lipped about what exactly they are investigating Cuellar for, experts speculate that it may be related to illegal actions by Azerbaijan oil companies. Cuellar has lobbied for the interests of the Azeri government and participated in trips to the country that included meetings with the heads of the state oil company.

He can little afford another foreign policy scandal. Cuellar was one of a handful of Democrats forced into a run-off in the 2022 primaries. He will face Jessica Cisneros this May. Cuellar is widely seen as one of the most conservative Democrats in the House, leading to a robust challenge from the progressive Cisneros.

Despite this, Cuellar is still the odds-on favorite to continue in office. In addition to the inherent power of being an incumbent, House Speaker Nancy Pelosi has personally endorsed him. However, Pelosi coached her support as merely being part of her universal policy of backing incumbents. Cisneros generally has the endorsements of the more progressive members of the party.