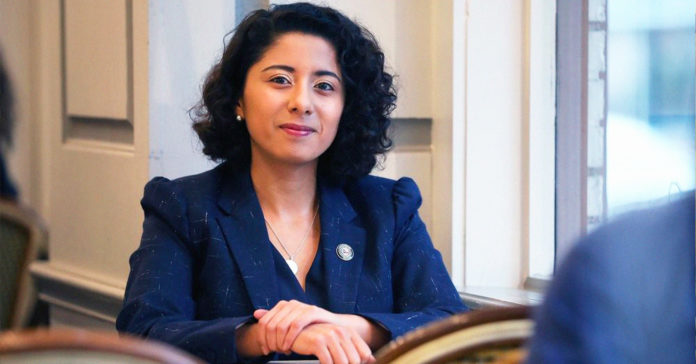 In the biggest county around the biggest town in Texas sits Judge Lina Hidalgo as the biggest boss. Her term as Harris County Judge has been marked by conflicts with Gov. Greg Abbott during the coronavirus outbreak and subsequent economic degeneration. Nonetheless, she is continuing to rise in acclaim and popularity.

The Rise to Power

A daughter of Colombian immigrants who moved to Houston when she was 15, Hidalgo has always been politically active. She attended Stanford University, where she penned a thesis on military intervention against popular protests before moving briefly to Thailand, where she helped train journalists to fight for freedom of the press. After returning to Houston, she went to work in the Texas Medical Center as a medical interpreter and volunteered with the Civil Rights Project. She was accepted into a Master’s/Juris Doctor Joint Program in law and public policy at Harvard University but decided to enter politics during the Democrats’s blue wave year of 2018 after watching the presidential actions of Donald Trump against health care and the free press.

Hidalgo was up against Republican Ed Emmett, an incredibly popular Harris County Judge who had been handily re-elected by a whopping 83.4 percent of the vote in 2014 despite overseeing an increasingly blue county. To say she was considered a long shot would be putting it mildly, especially after Emmett championed a popular $2.5 billion flood bond following the devastation of Hurricanes Ike and Harvey. Nonetheless, Hidalgo hit back hard on the obvious rightward drift of the Republican Party and the Good Old Boys network. At one point in the campaign, she refused to attend a commissioners court meeting out of protest because the site, a ninth floor room in a nondescript downtown Houston, was too hard for the general public to find.

“I had no desire of going at the time because it was part of the inner circle,” she said. “They don’t want you to be there.”

Hidalgo won her seat by just 19,000 votes, a thin margin that many Republicans bitterly blamed on straight-ticket voting, something the Republican-led legislature would seek to abolish afterward. She was the first woman and the first Latina to hold the office, and at 27 the second youngest after the legendary Roy Hofheinz. From political obscurity to overseeing a massive government machine with a budget half the size as many full states, it was an impressive beginning.

The Year of Living Dangerously

Hidalgo wasted no time shaking things up once she took power, and Texas Monthly declared 2019 her “year of living dangerously.” Bolstered by newly elected Adrian Garcia and Rodney Ellis as allies, the commissioners court went from a quiet, white Republican institution into a model of justice reform and public mindedness. Hidalgo’s court did away with perfunctory meetings and opened up the court to grueling sessions lasting five hours that brought in Harris County residents to air their grievances.

One of her biggest accomplishments during this period was settling a case to eliminate incarcerating people for being unable to pay cash bail, a practice long seen by justice reform activists as discriminatory.

But her willingness to upend the old ways have rankled more than a few residents. Hidalgo is largely the reason the Astrodome is once again rotting along Interstate 610 like an ancient ruin after she canceled Emmett’s $8 million repurposing project. Other construction projects, like building new juvenile detention centers to replace aging and insufficient ones were also scrapped.

The judge definitely put the county into a more liberal dimension. In 2019, her court recognized expanded rights for LGBT workers and initiated a Trans Day of Remembrance. Only four years after Houston’s bitter fight over transgender rights and the Houston Equal Rights Ordinance, it erased some of the bigoted backlash that had swept the county.

“Who you love and how you identify shouldn’t dictate what health benefits you get, or prevent you from feeling protected at your job,” she told OutSmart then. “Harris County has so many challenges. We can’t afford to alienate an entire segment of the population; we have to recruit the very best people so we can do the best work for our community.”

It was the tumultuous year we’re currently living through that would make Hidalgo a national figure who gets speaking slots at the Democratic National Convention and interviews on cable news.

Her fights with the Texas state government over the proper way to fight the coronavirus were essentially the battle for the nation’s health in microcosm.

On March 24, she announced a stay-at-home order that severely restricted movement and economic activity in the early days of the pandemic. Gyms, pools, malls and other businesses were told to close. Restaurants were ordered to be takeout-only. Kids who left for Spring Break did not return to class that year, and everyone who could work from home was mandated to do so. Those who had essential business drove eerily empty highways in the middle of the day, and Harris County residents drained stores of survival foods and toilet paper as if waiting for a hurricane.

In April, she would also sign a controversial order that instituted a $1,000 fine for people who left the house unmasked.

Meanwhile, the state was slower to issue a similar stay-at-home order, and when Abbott finally did, the language was much softer than other states had used, as if Abbott was trying to assuage Texans that the government would not really tell them what to do and seemed to include exceptions for many personal, non-essential reasons. This came after tourist towns in the state blatantly stayed open for Spring Break. After Hidalgo’s mask order, the governor openly superseded her authority. He declared she could not fine people for not wearing masks but didn’t mandate the practice himself either. His order merely “recommended” their use.

As the summer wore on, Hidalgo and Abbott would continue to trade rules back and forth. Houston Mayor Sylvester Turner sided with Hidalgo in June mandating that businesses enforce mask wearing. Abbott would eventually bow to public pressure in July and finally mandate masks after months of refusing to do so.

Their fights have continued up until now — most recently over the re-opening of bars. Abbott announced that bars could now resume at 50 percent capacity, but Hidalgo responded that such gatherings indoors were still too dangerous. She has vowed to keep Harris County bars closed, but it’s likely we’ll see if Abbott will test the increasingly visible judge’s authority once again .

On the home front, Hidalgo and Turner have turned out to be uneasy allies. The issue of evictions shows the rift between the high authority of the county and the mayor of Texas’ biggest city. When the federal moratorium on evictions lapsed in late July, Hidalgo wanted to extend it. The problem is, Hidalgo doesn’t really have that power and instead took her case to county attorneys to solve the problem.

Turner and the Houston City Council do have that power, but Turner refused to let a moratorium bill be put on the agenda. The act put the two Democratic powerhouses at odds even as residents were beginning to be forced out of their homes, and maneuvering by Hidalgo only raised more questions about the scope of her authority even in a state of emergency. She did find a way to get her way on the issue of foreclosures. Citing health concerns during the pandemic, she has used her executive powers to shut down the facility where those auctions are held every month.  Nonetheless, she continues her social progress initiatives. Recently, she approved $7.3 million to help Harris County residents with child care and workforce development programs. As the effects of COVID-19 continue to decimate Harris County and the country as a whole. Hidalgo and the commissioners court explore ways to lift residents out of the hole the pandemic has left the state in. It remains to be seen if her meteoric rise will be the start of a long political career or merely a flash-in-the-pan aberration from the 2018 blue wave, and no one will know for sure until she faces re-election in 2022. Until then, interesting times have conspired to keep her very much in the spotlight.