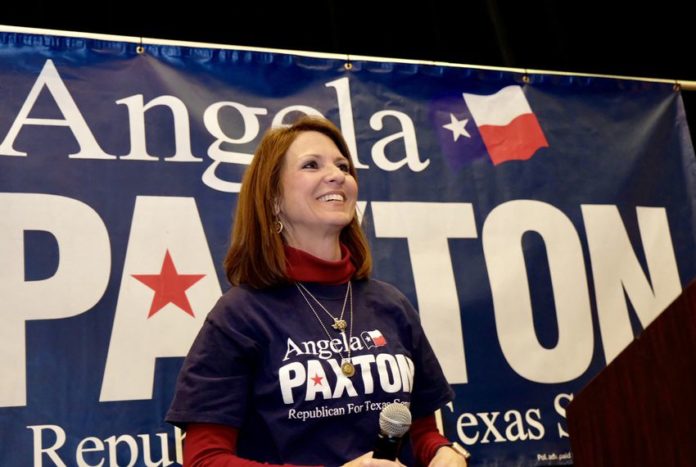 Sen. Angela Paxton’s Senate Bill 860, based on a 2018 Arizona law, would grant broad powers to the attorney general’s consumer protection division. Laura Skelding for The Texas Tribune
In what state Sen. Angela Paxton describes as an effort to safely expand Texas’ burgeoning financial tech industry, the freshman Republican from McKinney has filed a bill that would empower the office of her husband, Attorney General Ken Paxton, to exempt entrepreneurs from certain state regulations so they can market “innovative financial products or services.”
One of those exemptions would be working as an “investment adviser” without registering with the state board. Currently, doing so is a felony in Texas — one for which Ken Paxton was issued a civil penalty in 2014 and criminally charged in 2015.
Senate Bill 860, filed Friday, would create within the attorney general’s office a new program — what the bill calls a “regulatory sandbox” — that would allow approved individuals “limited access to the market … without obtaining a license, registration, or other regulatory authorization.” The bill, based on a 2018 Arizona law hailed as the first of its kind, aims to cut red tape for the growing financial tech sector, allowing businesses to market new products for up to two years and to as many as 10,000 customers with scant regulation.
In doing so, the bill would grant broad powers to the attorney general’s consumer protection division, allowing it to accept or reject entrepreneurial applicants who seek to hawk innovative products outside of the state’s current standards and regulations.
Angela Paxton said the bill is geared toward strengthening consumer protections in the under-regulated, ever-changing financial tech industry — a sector that in Texas is largely centered in Richardson, part of her North Texas district. Constituents from that district first brought the issue to her attention, her office said.
“SB 860 allows for the growth and economic benefit of the emerging Financial Technology industry while the state provides the necessary regulatory framework and consumer protection in the marketplace,” she said in a statement to The Texas Tribune. “The state agencies that have regulatory oversight of financial institutions and consumer protection laws will provide appropriate regulatory support within the sandbox to ensure that consumers are protected.”
But skeptics pointed to the bill’s optics problem: Ken Paxton, a statewide official accused of violating state securities law, would be empowered to decide who can skirt state securities law. And he’d get that power from a bill authored by his wife. Currently, Texas law requires investment advisers to register with the state. Failing to do so is a third-degree felony punishable by a sentence of two to 10 years.
Ken Paxton was charged under that law in 2015, when prosecutors alleged he had failed to register with state securities regulators for soliciting clients for Mowery Capital Management in return for fees. That came in an indictment with two other, more serious securities fraud allegations.
The criminal charges have yet to be tested at a trial, but the Texas State Securities Board found in 2014 that Paxton had acted illegally as an unregistered securities adviser at least three times: in 2004, 2005 and 2012. When he was issued a $1,000 fine in 2014, Paxton signed the disciplinary order and did not dispute its findings. At the time, a spokesman dismissed the charge as “an administrative oversight.”
Ken Paxton’s office did not return requests for comment. He has long decried the pending criminal case against him as politically motivated and has denied wrongdoing. His criminal trial, delayed for years, is on hold as the Texas Court of Criminal Appeals considers a side battle related to the appropriate pay scale for his appointed prosecutors.
In 2016, Paxton was cleared of related civil charges brought by the U.S. Securities and Exchange Commission.
Currently, the Texas State Securities Board is charged with reviewing applicants who seek to become financial advisers or sell securities. Angela Paxton’s proposal would — for applicants approved by the agency her husband leads — circumvent that process, handing some approval power to the attorney general’s office, and would override any existing state law that conflicts with it.
Jens Dammann, a securities expert at the University of Texas School of Law, said Angela Paxton’s bill would open a “fairly aggressive exception” in state securities regulations at a time when the trend nationally is to regulate more, not less.
It would also take the approval process out of the hands of state securities specialists and put it in the hands of someone whose primary expertise is in enforcing the law, experts said.

“It gives an uncomfortable level of discretion to the attorney general,” Dammann said. “As the bill stands, he would have to make judgments about the innovativeness of financial products. That’s probably not his main focus.”
If SB 860 moved through both chambers of the Legislature and eventually became law, it would take effect Sept. 1. The proposal does not appear to offer any retroactive legal cover for past violations, and it’s not clear whether it would directly impact Ken Paxton’s pending criminal case, but a change in statute could prove persuasive to a jury.
Still, ethics experts were slack-jawed that such a proposal would come from the wife of the state’s attorney general — even if he weren’t under criminal indictment for a charge so closely related to the legislation.
Randall “Buck” Wood, a longtime ethics lawyer in Austin, said it would be “a real concern” for Angela Paxton to introduce any legislation related to the agency her husband leads. But a proposal that relates so closely to his personal criminal indictment is “beyond the pale,” he said.
“It sounds like one of the more blatantly unethical acts I’ve seen recently. That’s just ridiculous,” Wood said. “This particular situation, it seems to me, is definitely personal to her and probably to very few other people.”
The measure would “almost certainly” influence Ken Paxton’s criminal trial, added Wood, who has worked as a trial lawyer for decades.
To take advantage of the program, applicants would have to pay a fee and win approval from the attorney general’s office. Applicants would apply to the agency with an “innovative product or service” they hope to test for a limited time and on a limited basis. The agency would be required to report back to the Legislature biennially.
Last year, before Angela Paxton was elected to the Legislature, experts told The Texas Tribune that any misstep could constitute a major ethical violation. Even voting on the state’s biennial budget, which includes her husband’s salary, could raise eyebrows, some said.
In a March 2018 TV interview, she brushed off such concerns.
“They’re different branches of government … and Ken and I are pretty likeminded people, but we’re certainly not clones of each other,” Angela Paxton said. “All you have to do is watch us around the thermostat to see that we have our own opinions about some things.”
Disclosure: The University of Texas has been a financial supporter of The Texas Tribune, a nonprofit, nonpartisan news organization that is funded in part by donations from members, foundations and corporate sponsors. Financial supporters play no role in the Tribune’s journalism. Find a complete list of them here.
This story originally appeared on the Texas Tribune. To read this article in its original format, click here.