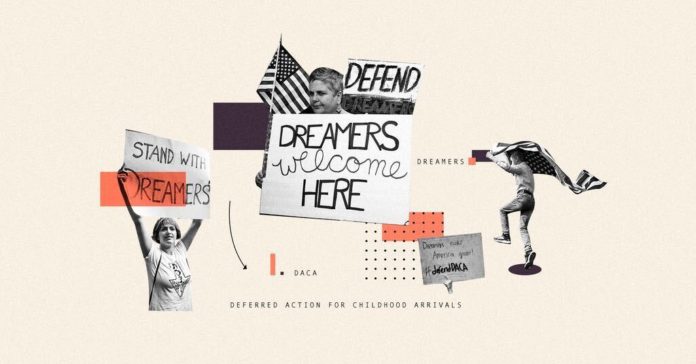 Since the state’s staggered reopening, every day means more Texans are going back to work. If they’re an essential worker on the frontlines, they might be working in grocery stores or providing care in hospital ICUs.

But for some, there’s an added worry on top of the lingering fear of getting sick at work: the fear that their DACA resident status might be revoked, meaning a realm of unknown possibilities like deportation, family separation, job loss and more.

The Supreme Court is currently deliberating on a decision about the future of immigrants who have residency status through an Obama-era program called Deferred Action for Childhood Arrivals.

In the U.S., nearly 650,000 DACA residents are anxiously waiting to hear what the high court will decide, a decision that is expected by the end of June but could come any day.

This is a program President Donald Trump wants to end, and he tried to end it in 2017. Trump claimed that the program was an overreach of former President Barack Obama’s executive authority, prompting a flurry of lawsuits from DACA lawyers emphasizing that a shutdown of the program doesn’t properly consider what the consequences would be for DACA residents as well as the rest of the country.

Of the 649,070 active DACA recipients, 80% are from Mexico and nearly 9% are from Central America, according to data from United States Citizenship and Immigration Services. California has the highest number of DACA recipients, with 185,880, followed by Texas with 107,020.

In the meantime, what could a decision either way from the courts mean for the Dreamers?

Aimee Maldonado, a staff attorney in the South Texas College of Law’s Immigration Clinic who has been working directly with Texas DACA residents on their applications, says the unknowns about this situation are “overwhelming.”

“There are just too many unknowns to know how to prepare right now,” Maldonado said. “The livelihood of a lot of people is directly hanging on this decision from the Supreme Court. If they lose their DACA, they can’t work. Some of them in the time since this program began have used their DACA status to be able to attend college, complete a degree, earn a professional license. And now they might be told, ‘you can’t use it and can’t work.’ It’s not just devastating for them, but you also lose a huge part of the workforce overnight.”

Maldonado pointed out that some key industries with specialized or licensed workers would suffer tremendously under a negative ruling from the court. A major area the ruling would affect is education. Maldonado said that many dreamers are teachers, and with schools reopening or going fully online for another school year in the fall, a lack of teachers could be really hard on the school system.

That’s not to mention that many DACA recipients are also nurses or other kinds of medical workers, which often requires specialized education or training. They are just not replaceable overnight.

“This ruling is coming at a time when we’re still dealing with the pandemic,” Maldonado said. “That’s one of the problems some people are having — they need to renew their DACA application, but they don’t have the financial means to do so because they’ve lost their job or had their hours reduced. If they are able to renew their DACA, they might be a frontline worker or a teacher, or tons of other kinds of jobs. But the type of job you have — ‘essential’ or not — doesn’t matter for DACA status. What would the medical or education field do if they lost specialized workers who are uniquely qualified or licensed, but also Dreamers?”

Maldonado, along with many other attorneys across the state, are working long hours to help DACA recipients apply or renew their status application.

“We are still applying and processing residents because we just don’t know what the outcome will be,” Maldonado said. “If it’s a possibility that there’s a more positive ruling, and a resident can get status or renewed status, then we want to get it done now just in case.”

Even if the ruling isn’t a full reversal of the program — a worst-case scenario Maldonado said — right now many attorneys feel the most positive outcome would be that the program remains in litigation but gets bumped down to the lower courts again. That would buy them some time.

“We’re not sure if this would mean those with a current permit could work until it expires, or if it would mean immediate effects,” Maldonado said. “If the program is allowed to continue, that’s an ideal situation obviously. But we’re not sure if that will happen. The Supreme Court also doesn’t give details about the decision — once it’s handed down, it will be up to local attorneys to work with residents to interpret and understand the high court’s decision and get them the most accurate information and most help as possible.”

Aside from the effects the ruling would have on jobs and the economy, for many DACA residents this could also mean a lot of changes and possible hardships in their personal lives — lives they’ve worked really hard for.

The average age of current DACA recipients is 26, and about two-thirds are between the ages of 21 and 30. This means that many of the current DACA residents who were brought to the U.S. as children and protected by this program could be facing the loss of homes bought and livelihoods established since they’ve gotten to the U.S. More than 50,000 DACA residents own homes in the U.S. and others collectively pay over two billion in rent each year, according to data from a study by the Center for American Progress.

Devastatingly, even family separation might be possible. Children of DACA residents can’t petition for adults until they are 21. There are about 254,000 children born in the U.S. who have at least one DACA parent, according to the study.

A negative ruling from the Supreme Court then would have lasting effects on the overall economy, the housing market, the foster care system, the job market, and more.

“A negative ruling could leave them in a ‘what do I do now?’ situation,” Maldonado said. “If there was something they could do, any other option, they would have already done it. For many, DACA is the only option.”