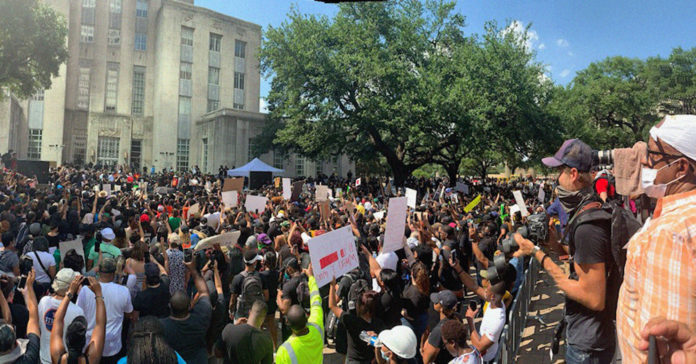 In Texas, demonstrations ensued. Tens of thousands of people have been expressing outrage over what happened in Minnesota and systemic racism and police brutality in general. The Lone Star State also has a history of police brutality and killing people of color.

Floyd, who was from Houston, died after Minneapolis police officer Derek Chauvin put his knee on the handcuffed victim’s neck for almost nine minutes. Chauvin has been charged with third-degree murder and second-degree manslaughter. All four officers who were on the scene were fired. The other three were charged with aiding and abetting nurder.

Elected officials from both major political parties in Texas weighed in on the situation.

“George Floyd is from my district. He grew up around the corner from me, and so it’s even more personal in that regard,” said state Rep. Garnet Coleman (D-Houston) in an interview with Reform Austin. “I grew up with this. That’s something that people have to understand. At 58 years old, I grew up being afraid of the police.”

State Sen. Pete Flores (R-Pleasanton) said what occurred was iniquitous and justice will be served.

“I stand with my fellow Americans when I say what happened to George Floyd was wrong,” he said in a press release issued Wednesday. “Our system of justice will prevail and hold those guilty of wrongdoing responsible.”

Watching the video of Floyd’s killing has made Texas Municipal Police Association Executive Director Kevin Lawrence depressed. He said he doesn’t want to pass judgment and indicates the legal process has to play out but after viewing the footage it looks very bad to him. He said every police officer he has talked to said they can’t imagine why that happened.

“I’m just saying that from my point of view and even with my background in law enforcement when I watched that I understand why people are so emotional about that video because I got emotional, too,” he said in an interview. “I was getting mad at the officers.”

The public needs to hear police officers say they were appalled, Lawrence said. The restraint technique didn’t bother him as much as the duration the knee was applied to the neck.

Floyd’s death is the latest in a succession of racially related excessive force/brutality incidents committed by American police departments that go back decades.

During the last 20 years, the police departments in Oakland, Calif., Los Angeles, Detroit, New Orleans, Cleveland and Ferguson, Mo. have been under federal monitoring, according to the Mercury News. The Oakland Police Department remains under federal oversight which stemmed from a 2000 scandal in which four “rogue” police officers assaulted 119 citizens — 118 were African American — and planted evidence on them, the Mercury News said.

A 2019 study released by the Proceedings of the National Academy of Sciences of the United States of America concluded that African American males face the greatest risk of being killed by law enforcement during their lives. Their models predict that nearly 100 black men per 100,000 will be killed by police over a lifetime as opposed to only 39 per 100,000 for white males. The estimate for Latino males was 53.

Killings and excessive force by police have been a trend for years in Texas, but they have ramped up in the past five years and included the fatal incidents of Sandra Bland (2015), Jordan Edwards (2017), Botham Jean (2018), Atatiana Jefferson (2019) and Michael Brent Ramos (2020).

With the next legislative session commencing in January, lawmakers are already considering and preparing legislation dealing with police violence and the disconnect between law enforcement and the black community.

On Friday, the Texas Legislative Black Caucus requested a meeting with Gov. Greg Abbott next week.

“The TLBC recognizes that ours is not a fight that can be successful in isolation of the other members of the Texas Legislature,” wrote TLBC Chair State Rep. Harold Dutton (D-Houston). “Governor, the TLBC is concerned that it appears that you have not embraced inclusion, at least at the moment, and we hope this is simply a benign oversight. As you certainly know, our voices must be and will be heard on a matter so important particularly to the folks we represent.”

“Prior to becoming elected, we really started campaigning and advocating for community policing as a solution as well as working toward the deescalation with officers,” said Rep. Rhetta Bowers (D-Garland) in an interview with Reform Austin. “And too many times after every murder … we’ve had to talk to our children and especially our son every time it happens. Every time. Every time you have to have that talk again.”

Continuous training has to be part of the solution, Bowers said. She said a one-time training isn’t going to be enough.

“I’m really proud that this is an issue that we’ve been working on for a long time, and I did file legislation last session asking for increased credit hours and training for law enforcement,” she said. “And I’m sure now looking at what has happened that I’ll go back and take it up again. I’ve already asked my staff to pull that bill. Let’s look at it and we’ve got to rework it.”

Mandatory racial-bias training is another component that could be introduced next year. Coleman wanted it in his 2017 bill.

“We wanted it in the bill,” he said. “But we did get deescalation training, and I think that’s helped in Texas. But we need to have racial bias, implicit-bias training, for all peace officers in Texas.”

He said officer training does not have to go through the legislative process but could be implemented through the Texas Commission on Law Enforcement.

“We put training in the Sandra Bland Act, but it wasn’t required to be statute,” Coleman said. “It forces them to do it in statute. But they could do it without statute as making it a part of training.”

There was law enforcement opposition to the training in the 2017 legislation, he said.

Though Coleman is quick to point out that Texas has done more than most states in its officer training efforts. Much more than Minnesota, he added. He also said a corner has been turned and progress can be made next session especially after Gov. Greg Abbott publicly stated the actions of the Minneapolis officer were a “horrific act of police brutality.”

Yet Coleman is adamant that racism persists in police departments nationwide.

Police don’t deny there is racism within their ranks, Lawrence said, but he feels they are highly capable of tackling the issue. Police officers are demoted, suspended, fired, indicted, prosecuted and convicted every day in this country, he said.

In 2016, five police officers were killed and several wounded in an ambush in Dallas during a protest. Bowers and her children were there peacefully protesting the police killings of Alton Sterling and Philando Castile.

“Back in 2016, when we had the Dallas ambush here, unfortunately, my children and I were out at that peaceful protest,” Bowers said.

Her family’s personal experience with federal law enforcement and Dallas police officers during the highly tense Dallas ambush made her realize these people were performing their jobs professionally and protecting them from the line of fire. It changed her perspective.

The screaming and hate need to stop, and the focus has to be on better communication, not division, Lawrence said.

The situation has now become critical given how frequently these deaths have been occurring, Bowers said.

She recently told someone that “It’s almost like we’ve been gasping for air between every one of those murders and killings.”