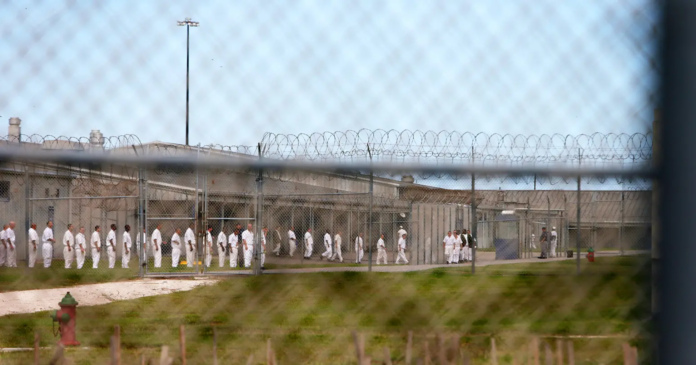 The U.S. Supreme Court ruled Monday that a Texas psychiatric prison inmate left for days in cells covered in either feces or sewage can suesixprison officers. That decision overturned an appeals court ruling that the officers had “qualified immunity,” a legal doctrine that protects public officials from civil cases and only allows lawsuits where there are clear violations of constitutional rights.

The high court has previously refused to hear several qualified immunity cases. The doctrine has been used to stop civil cases against police and correctional officers. But in Monday’s ruling, the justices called the facts in Trent Michael Taylor’s case “particularly egregious” and said that any officer should have known that the conditions he was placed in “offended the Constitution.”

Taylor is suing six officers from the John T. Montford Psychiatric Facility Unit in Lubbock. Taylor alleged in the federal district court in Lubbock tha the was naked when he was forced into a cell whose floor, windows, walls and ceiling were covered in feces. The faucet in the cell was also covered with feces and Taylor said he could not drink water. After three days, Taylor was transferred to a cell with a clogged drain overflowing with raw sewage. That cell had no bed or a toilet. Taylor claims he was told to urinate on the floor.

“No reasonable correctional officer could have concluded that, under the extreme circumstances of this case, it was constitutionally permissible to house Taylor in such deplorably unsanitary conditions for such an extended period of time,” the ruling said. “Although an officer-by-officer analysis will be necessary on remand, the record suggests that at least some officers involved in Taylor’s ordeal were deliberately indifferent to the conditions of his cells.“

Justice Clarence Thomas was the single dissenting voice in the ruling and Justice Amy Coney Barrett didn’t participate in the decision.

The six officers part of Monday’s ruling — Robert Riojas, Ricardo Cortez, Stephen Hunter, Larry Davison, Shane Swaney and Joe Martinez — were represented in the Supreme Court by the Texas attorney general’s office, which didn’t immediately respond for comment. The Texas Department of Criminal Justice, which manages the facility in Lubbock, also didn’t respond to a request for comment.

Elizabeth Cruikshank, one of Taylor’s attorneys, said his legal team was thrilled.

“First and foremost, we’re so grateful that Mr. Taylor is going to have the opportunity to continue his fight to vindicate his constitutional rights in the courts,” shesaid. “We are also really pleased with the broader implications of this decision. The Supreme Court has been really expanding the doctrine of qualified immunity over recent years. And so this is sort of an unusual case in which the Supreme Court said that conduct had really gone too far to qualify to get qualified immunity. And so we think that this decision will hopefully help ensure that other people who are like Mr. Taylor will have the opportunity to vindicate their rights.”

A prisoner advocacy group said that while Monday’s ruling didn’t eliminate the qualified immunity doctrine, it established limits of its application and shows that police officers or correctional officers are not always protected from civil consequences.

“For the last seven or eight years or so, the Supreme Court has repeatedly reversed lower courts for not being strict enough on qualified immunity, for not giving defendants a big enough margin of error,” said Samuel Weiss, executive director of the criminal justice organization Rights Behind Bars. “This communicates to the lower courts that even though the doctrine is not formally changed, there are certain limits that the Supreme Court itself will not tolerate.”

This story was originally published on the Texas Tribune. To read this article in its original format, click here.