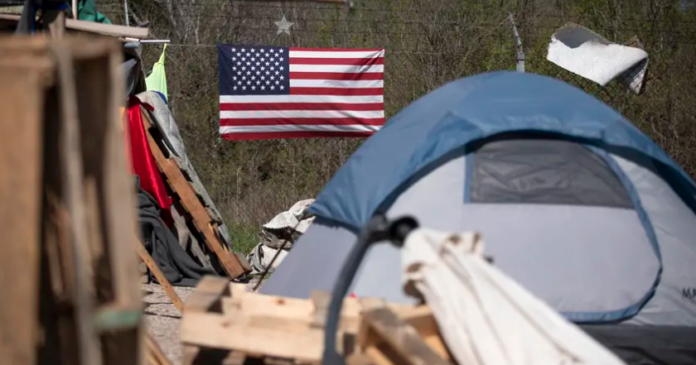 The Texas Department of Housing and Community Affairs is slightly backing off a controversial plan that would make it harder for homeless Texans with particular criminal histories to live in tax-subsidized housing units meant to help them secure permanent homes. At a meeting Thursday, agency officials said they would drop a proposal blocking people with convictions for nonviolent felonies and class A misdemeanors from living in new developments financed with what are called Low-Income Housing Tax Credits.

But the agency still plans to ban prospective tenants who have committed some violent felonies and some drug-related offenses for three to seven years after their convictions. That remaining planned prohibition has some homeless organizations saying the proposed rule will still make it hard to get homeless people into “supportive housing” developments.

Supportive housing projects are funded through Low-Income Housing Tax Credits, which give developers tax benefits in exchange for building homes that are leased at below-market rates. Once they’re built, developers and local providers coordinate to connect tenants that were previously homeless with support services like mental health or substance use programs. Either the developer or external agencies provide these services in order to help tenants get back on their feet.

“We changed the language and we changed it drastically,” Bobby Wilkinson, executive director of TDHCA, said during the hearing.

These projects are only one kind of housing created by the housing program, but advocates said they are key to fighting homelessness.

“If we are going to reach our goal of making homelessness rare, brief, and non-recurring, our homeless response systems need access to low barrier affordable and supportive housing,” said Eric Samuels, president of the Texas Homeless Network, an organization that coordinates statewide homelessness efforts. “We need low barrier affordable and supportive housing to end homelessness. So, for this reason, we opposed adding the tenant criminal background screening criteria.”

TDHCA said previously that “almost all affordable housing developments” and “a vast majority of supportive housing developments” had similar rules in place. But advocates explained that these weren’t forced by the state. So for now, if a potential tenant has a criminal record, case workers can try to negotiate with the developer and find conditions in which that person would be approved.

The first version of the rule, advocates said, forced new developments to automatically deny applicants. The approved version will include a mandatory process through which a denied applicant could show documents like letters of recommendation or proof of participation in substance use programs, and possibly be accepted by the building management. But this doesn’t guarantee they will be approved.

Wilkinson explained that TDHCA’s changes will allow developers to accept any resident if they want to, but that not having any screening at all could have a negative impact on residents and neighborhoods.

Samuels said that he valued these changes but would have preferred no state-mandated requirement for applicants to supportive housing at all. Other advocates agreed and pointed out that given the racial disparities in the criminal justice system, this rule could especially impact Black and Hispanic people.

“I continue to believe that it will have a disparate impact on blocking people of color from accessing this housing. For a state agency to support that, I find [it] appalling,” Elizabeth Roehm, an attorney for the advocacy organization Texas Housers, said in an interview.

During the hearing, advocates said therule could have a negative effect on survivors of domestic violence, too.

“Many times women who are fleeing have also encountered the criminal justice system, which can include felony charges that may have resulted due to a violent relationship, often where the woman has resorted to using violence as a strategy for her own safety,” Barbie Brashear, executive director of the Harris County Domestic Violence Coordinating Council, said during the hearing. “Rules that make it more difficult for a family to obtain affordable housing and rules that support denial have negative and long-lasting impact to the safety of families.”

According to a 2019 homelessness count, there were more than 3,500 people in Texas who were chronically homeless, which means that they’d remained unhoused for more than a year. Many have additionalchallenges, like a disability, a mental illnesses or a history of substance use disorders. Organizations don’t count how many of them have been convicted of crimes, but Samuels said it is not uncommon for homeless people to have criminal records.

“Most of these are nuisance crimes,” Samuels said in a previous interview. “People experiencing homelessness are victims of crime far more than they are perpetrators.”

After Thursday’s vote, the rule will go to Gov. Greg Abbott, who will have to make a decision on whether to support the proposal by Dec. 1.

The housing tax-credit program is a federal initiative that is managed by the states. In Texas, developers and nonprofits can compete for the tax benefits in exchange for building, renewing or preserving homes for low-income people and other groups in need of affordable housing.

This story was originally on the Texas Tribune. To read this article in its original format, click here.