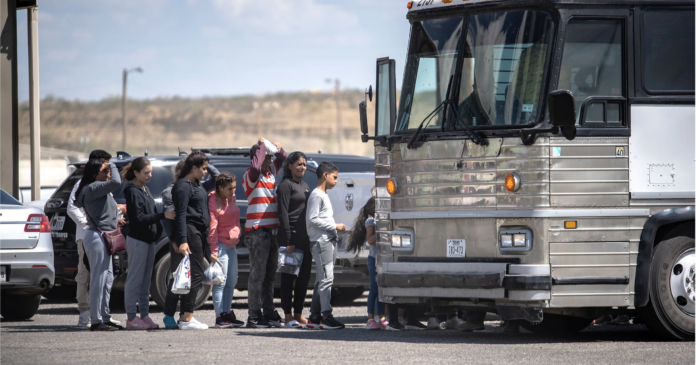 The American Civil Liberties Union is calling on the federal government to stop cooperating with Gov. Greg Abbott’s executive order authorizing state troopers to transport migrants back to the border ports of entry – escalating a debate over the state’s authority to enforce immigration laws.

The request by ACLU Texas and the group’s national leadership for the Biden administration to investigate the state’s latest immigration policy comes a week after The Texas Tribune reported on how state troopers are transferring suspected migrants to the port of entry in Eagle Pass and turning them over to federal immigration authorities. Abbott had authorized the practice in a July 7 executive order but provided little clarity on how the migrants would be transported and under what authority they were being detained. Immigration law enforcement is a federal responsibility but Abbott’s order is taking unprecedented steps that are encroaching on that authority.

The ACLU on Monday called for an investigation by the Department of Homeland Security’s Office for Civil Rights and Civil Liberties. The ACLU asked the agency to: monitor the Eagle Pass port of entry to ensure federal agents are acting appropriately; collect and publicize data on the purported state authority for the transfer of people from Texas DPS to federal immigration agents; identify gaps in U.S. Customs and Border Protection policies related to this practice and issue relevant recommendations; and take all appropriate steps to identify and address civil rights violations that could be occurring as a result of Abbott’s order.

The civil liberties group also called on the federal government to stop taking migrants transported by state authorities into their custody.

“DHS should decline to take custody of individuals in these circumstances, and should prevent Texas state and local officials from detaining individuals on federal property pursuant to Governor Abbott’s executive order,” ACLU staff attorneys wrote in a letter to DHS Office for Civil Rights and Civil Liberties.

The letter cites the Tribune’s reporting on the transfer of migrants from state to federal custody, noting that the migrants are transported in a Texas Department of Criminal Justice bus to a commercial vehicle inspection site near the port of entry and that migrants are made to wait under a truck port until Border Patrol agents arrive to pick them up. In one instance observed by the Tribune, migrants waited for nearly three hours before federal agents came to pick them up.

The civil rights group said the commercial vehicle inspection site “appears to be the CBP U.S. Customs and Commercial entrance,” which is federal government property. The Tribune could not independently confirm that, but the transfer of migrants by state authorities to federal government property would more clearly lay out a legal argument that state authorities are participating in immigration enforcement.

Federal immigration authorities have national standards on how to transport, escort, detain and search suspected migrants, including what types of vehicles are to be used to move migrants, the conditions of the detention and how the officers should behave. Texas DPS officers are not bound by those same standards.

“This disparity may lead to migrants being held on federal property in conditions that are not in compliance with the [standards] and that may be dangerous,” the ACLU wrote in its letter.

The ACLU pointed to a DHS inspector general finding earlier this year that a CBP outdoor holding area did not meet temperature requirements set out in the federal standards and said holding migrants outside for three hours, as the Tribune reported, poses a risk of heat exhaustion and heat stroke.

The group was also concerned about at-risk groups like pregnant people, elderly people and people with disabilities who are at higher risk for heat-related illnesses. Federal agents are trained on how to care for these groups, the letter said, but DPS officers are not.

“Simply put, migrants are being held on federal property in violation of the [federal standards] and in potentially dangerous conditions,” the group’s letter reads.

The group also said there is significant evidence that Abbott’s border security mission, dubbed Operation Lone Star, engages in “systemic discrimination against Black and brown migrants and Latinx individuals in South Texas” because its traffic stops “have plain indicia of racial profiling.” The group said the state is also targeting Black and brown migrants for arrest and greater punishment in a “separate criminal system under Gov. Abbott’s discriminatory ‘catch-and-jail’ scheme.”

The ACLU and other groups have filed complaints with the U.S. Department of Justice about Operation Lone Star’s alleged civil rights violations, and the civil rights group warned that if the federal government continued to collaborate with the state operation it could be accused of participating in discriminatory practices.

“DHS should reject any involvement with DPS’s immigration enforcement efforts in South Texas—including with Governor Abbott’s July 7 executive order—to ensure that it has no entanglement whatsoever with the agency’s discriminatory actions,” the letter reads. “Federal funding cannot further discrimination on the basis of race or national origin.”

Disclosure: ACLU Texas has been a been financial supporter of The Texas Tribune, a nonprofit, nonpartisan news organization that is funded in part by donations from members, foundations and corporate sponsors. Financial supporters play no role in the Tribune’s journalism. Find a complete list of them here.