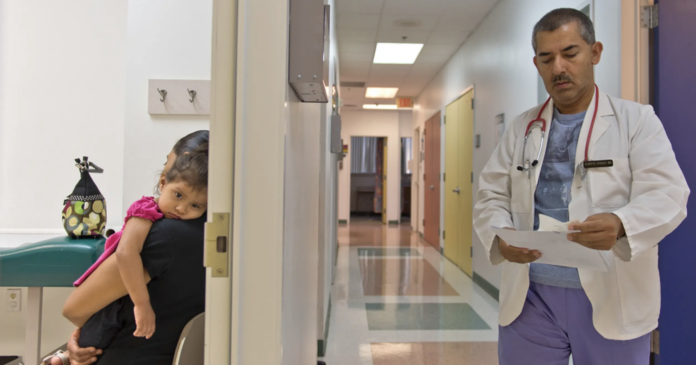 Federal health officials on Friday restored $7 million a day in funding to Texas hospitals after stopping it six months ago over concerns about how the state pays for health care for uninsured Texans.

Until last September, Texas had tapped this funding, which comes through what is known as the 1115 Medicaid waiver, to reimburse hospitals for patients who use Medicaid. Most states are able to get these dollars by matching the federal dollars from their general revenue.

But Texas had come up with its own mechanism known as the Local Provider Participation Funds, in which private hospitals set up taxing districts and sent that money through local and state governments to the U.S. Centers for Medicare and Medicaid Services.

However, after it was discovered some hospitals profited from the Medicaid payments and covered the tax for other hospitals, CMS halted the payments in September while it argued with the state over whether that LPPF system is allowed.

Whether the system violates the rules of the state’s 10-year 1115 funding agreement with CMS remains an open question.

But Friday’s decision means some $7 million per day in federal funds to Texas hospitals can start flowing again while federal officials take a closer look. The decision is retroactive to September, when it was initially stalled, so the facilities will also get the funds that would have been coming in for the past six months had they not been stopped.

The end to the stalemate “has been desperately needed in the midst of an ongoing public health emergency,” said John Hawkins, president and CEO of the Texas Hospital Association. “On behalf of our hospitals and patients, we are incredibly grateful.”

Meanwhile, the U.S. Department of Health and Human Services has ordered an audit of how that unique Texas LPPF funding mechanism works and is being used, a nod to federal concerns that it’s against the rules. If it’s found to be a violation, Texas would have to come up with another way to draw down those federal dollars, such as taking the money from general revenue or implementing a uniform statewide tax on hospitals, for example.

Hawkins said his group is “closely evaluating” that issue.

Local governmental entities have entered into these agreements with hospitals at an increasing rate since 2013.

“We hope to continue working closely with our state and federal partners on the structural elements of these programs and a path forward that best suits the people of Texas who need our care,” Hawkins said.

Texas has the nation’s highest number of uninsured residents, estimated at 5 million, and also has the country’s biggest share of residents — at least 18% — who are not covered.

When they show up in emergency rooms, the hospitals care for them and then are reimbursed in part by the 1115 Medicaid waiver, which has brought some $30 billion to Texas in the past decade for uncompensated care, mental health programs and similar services.

The 1115 waiver was set to expire this year after federal health officials last April rescinded a 10-year Trump-era extension to the agreement — which Texas has had with CMS since 2011 and is up for review every few years.

Then last summer, a judge reinstated the extension while the fight made its way through the courts.

The 1115 waiver was meant to be temporary while Texas transitioned to an expanded Medicaid program under the Affordable Care Act of 2010, but that never happened because the U.S. Supreme Court ruled in 2012 that states couldn’t be forced to expand Medicaid.

Since then, the state has relied on the waiver for various programs to care for Texas’ uninsured population, with Republican state leaders frequently leaning on it in their arguments against Medicaid expansion. The state and about a dozen others that have not expanded Medicaid have come under increasing pressure to do so from the Biden Administration.

The basis of Texas Attorney General Ken Paxton’s lawsuit fighting the end of the 1115 waiver is that Biden is using it as a weapon to force the state to expand the program.

A majority of Texans support expanding Medicaid to include millions more mostly working poor people, according to recent surveys.

Disclosure: The Texas Hospital Association has been a financial supporter of The Texas Tribune, a nonprofit, nonpartisan news organization that is funded in part by donations from members, foundations and corporate sponsors. Financial supporters play no role in the Tribune’s journalism. Find a complete list of them here.

Correction, March 25, 2022: A previous version of this story misstated how Texas uses funding from a 1115 Medicaid waiver. The funding reimburses hospitals for care given to patients who use Medicaid, not patients who are unable to access Medicaid.