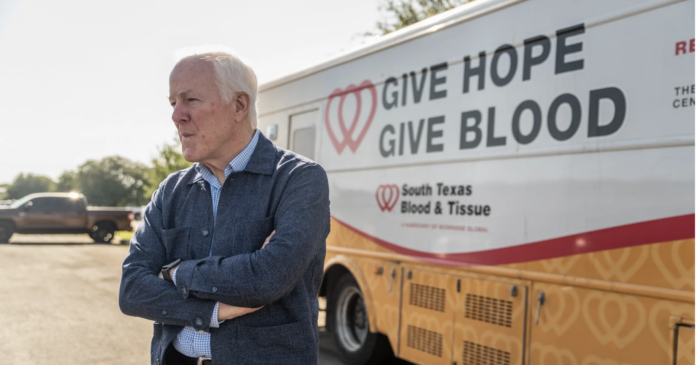 WASHINGTON — U.S. Sen. John Cornyn, the lead GOP negotiator in the Senate’s efforts to pass bipartisan gun safety legislation, is managing expectations over what kind of bills he’s willing to get behind.

But the answer to that question isn’t going to satisfy many Democrats who are pushing for restrictions that include expanded background checks and raising the age to purchase a firearm in the wake of the devastating elementary school shooting in Uvalde.

“Targeted reforms, I think, is the way to get to where we need to go,” Cornyn said in a Senate floor speech on Monday.

As a former Senate GOP whip, Cornyn made clear that there are limits to what he and the Senate GOP conference are willing to support. Bringing up the old political maxim of “the art of the possible,” Cornyn said “we are not talking about restricting the rights of current, law-abiding gun owners or citizens.”

“What I’m interested in is keeping guns out of the hands of those who, by current law, are not supposed to have them,” he said. “People with mental health problems, people … who have criminal records. Again, this is about the art of the possible.”

What is not possible, he said, are bills that the Democrat-controlled House is expected to take up this week. Democrats are expected to pass an array of legislation next week that has almost no hope of senate passage.

Among the proposals in consideration on the House side this week: raising the age to purchase semi-automatic weapons to 21; outlawing the sale, manufacture, transfer or possession of a large-capacity magazine; creating tax breaks for purchasing proper gun storage equipment; and codifying into law a Trump-era Justice Department ban on bump stocks.

“We’re not talking about banning a category of weapons across the board, a ban for certain high-capacity magazines or changing the background check system by adding additional disqualifying items,” he said.

Cornyn served as the Republican whip until he was term-limited out of that role in 2019. But in that position, he acquired a reputation for staying in close communication with his GOP colleagues and for being able to deliver votes.

He has demonstrated an ability in the past to move limited gun legislation through Congress. Back in 2018, he passed a bill into law that improved the national background check system to prevent domestic abusers from purchasing firearms in the wake of the 2017 Sutherland Springs church shooting that left 26 Texans dead.

Assuming all Democrats are on board with a bill, Cornyn would need nine other Republicans to override a filibuster threat. But he telegraphed in that speech that he wants a measure that will attract even more GOP support.

In the Monday speech, Cornyn underscored his efforts by repeatedly using the word “consensus.” He brought up his primary partner in negotiations, U.S. Sen. Chris Murphy, a Connecticut Democrat, and other colleagues. But he stressed that this is a Senate-wide discussion.

Cornyn said that he is in touch “literally with everybody I can reach on the phone or get through text message to see if there’s some package of mental health and safety legislation that addresses some of the factors that might have prevented the recent shootings in Uvalde and elsewhere.”