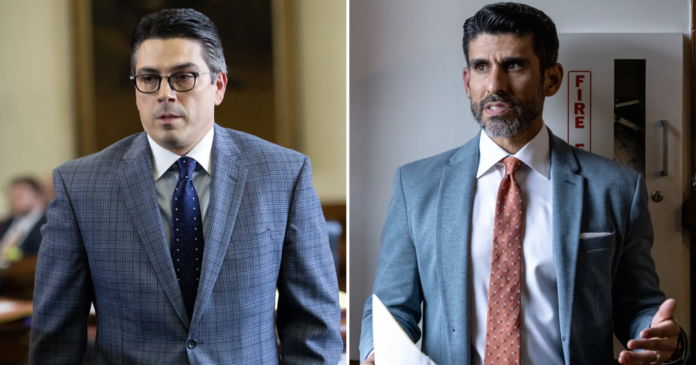 A 2019 law aimed at cracking down on the revolving door of lobbyists at the Texas Capitol is ensnaring two recent legislators and prompting state ethics regulators to address potential loopholes.

The law says former members of the Legislature cannot engage in activities that require them to register as a lobbyist if they have made a political contribution using campaign funds in the past two years. It is meant to prevent a situation where, for example, a lawmaker spreads campaign contributions around to colleagues, steps down or loses reelection — and then goes to lobby those same colleagues a short time later.

The law, House Bill 2677 by state Rep. Craig Goldman, R-Fort Worth, passed without any opposition in both chambers.

But redistricting has created more turnover than usual at the Legislature this year, creating a pool of former lawmakers who may want to join the lobby. Two of them — former state Reps. Eddie Lucio III, D-Brownsville, and Chris Paddie, R-Marshall — registered as lobbyists with the Texas Ethics Commission last week, despite using campaign cash for political contributions in the past two years. But after media inquiries, they decided to suspend their registration.

Paddie nonetheless characterized his registration as a proactive measure and said it was not because he had engaged in activities requiring disclosure — the threshold outlined for the two-year ban under the 2019 law.

Lucio’s case is a little more unusual. When he shut down his campaign account earlier this year, he sought to retroactively comply with the 2019 law by seeking refunds of all the political contributions that he thought he had made in the last two years. But his lawyer said he recently became aware of other political contributions Lucio made over that period. And he is now unable to rectify the situation because the account has been closed.

“We reviewed Mr. Lucio’s reports and the applicable laws surrounding lobby registration and we believe that he did everything he could to mitigate his situation before registering,” Lucio’s lawyer, Andrew Cates, said in a statement. “Subsequently, we were made aware of additional contributions Mr. Lucio made in 2020 that we were unable to mitigate prior to closing his campaign account. Out of an abundance of caution, Mr. Lucio will suspend his lobby registration until the time period runs out in October 2022 and we will reassess his legal options at that point.”

Both Paddie and Lucio announced they were not seeking reelection during the redistricting process last year and then stepped down early months later. Paddie, the former chair of the House State Affairs Committee, had registered to lobby for Incode Technologies, an identity verification company based in San Francisco. Lucio had registered to lobby for five clients, including the health insurer Blue Cross Blue Shield and Texans for Lawsuit Reform, the powerful tort reform group.

Their registrations came as the Texas Ethics Commission was crafting an advisory opinion that addressed a potential loophole in the 2019 law. An unnamed state legislator had asked the commission to weigh in on whether the two-year ban applies to not just campaign accounts, but separate political committees where lawmakers sometimes maintain their contributions.

All lawmakers have a “candidate/officeholder account” that is traditionally the main vehicle for their campaign finances. But some choose to raise and spend money out of other committees — often “special-purpose” committees — to allow for more flexibility.

The opinion said those committees can count, too, if the commission has to consider whether a lawmaker-turned-lobbyists has used campaign funds for political contributions in the past two years.

“Yes, if the candidate or officeholder has the authority to control the contributions accepted and expenditures made by the specific-purpose committees,” the opinion said.

However, there is still ambiguity. It is unclear how the law defines “control” in this case, and that would likely be up for debate if the commission ever handled a complaint related to the HB 2677.

Furthermore, during a commission meeting last week, Commissioner Steve Wolens said he was concerned about the constitutionality of the law in the first place.

“If this were an enforcement proceeding, I think I’d have a hard time enforcing the statute because I think it’s unconstitutional,” Wolens said.

The advisory opinion could be relevant for people like former House Speaker Dennis Bonnen, R-Angleton. There has been speculation he may be interested in lobbying, though he has neither registered nor announced any plans, and a spokesperson did not respond to a request for comment.

But he operates a political committee, Texas Leads PAC, that started in 2019 with $3 million transferred from his campaign account, and the PAC made political contributions as recently as earlier this month.

It is unclear if lawmakers knew exactly what they were voting on when they passed HB 2677 in 2019. Goldman gave a brief presentation of the bill that focused on a provision banning lawmakers-turned-lobbyists from making present-day political contributions from their leftover campaign funds.

“HB 2677 states that a former elected official or candidate now registered as a lobbyist may not use funds from their campaign account to make a political contribution,” Goldman said in early May 2019 on the House floor.

He received no questions about the bill from his colleagues, and it passed by a voice vote about a minute later.

Disclosure: Texans for Lawsuit Reform has been a financial supporter of The Texas Tribune, a nonprofit, nonpartisan news organization that is funded in part by donations from members, foundations and corporate sponsors. Financial supporters play no role in the Tribune’s journalism. Find a complete list of them here.

Tickets are on sale now for the 2022 Texas Tribune Festival, happening in downtown Austin on Sept. 22-24. Get your TribFest tickets by May 31 and save big!