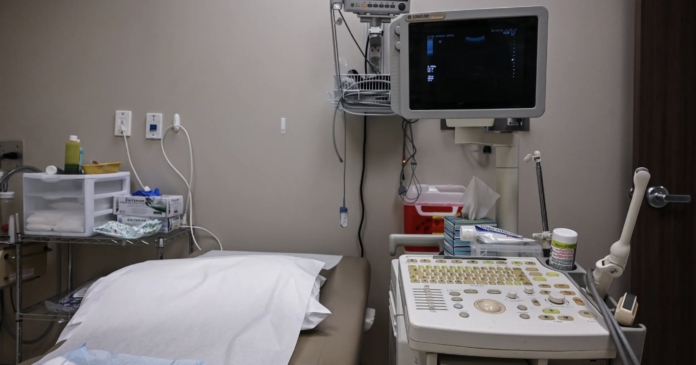 A young woman and her mother are nervously driving through the night when they’re pulled over by law enforcement. Flashlights in their faces, the women are questioned about whether they’re heading for the border and whether the young woman might be pregnant, before being pulled out of the car.

This political ad, released ahead of the 2020 election, speculated about what a post-Roe v. Wade future might look like as Republican states sought to crack down on abortion ban violators.

In the weeks since the U.S. Supreme Court overturned the constitutional protection for abortion, the ad went viral, contributing to growing fears of state border checkpoints and widespread data mining to track menstruation and pregnancy outcomes.

“But I think the reality is, the vast majority of these criminal cases are going to begin in kind of more mundane and common ways,” said Emma Roth, staff attorney at National Advocates for Pregnant Women.

Despite fears of unconstitutional legal gambits and Big Brother-style tracking, lawyers and experts predict that much of what is expected to unfold over the coming months and years will look very familiar.

More than 1,700 people have faced criminal charges over pregnancy outcomes since 1973, according to NAPW. Like a woman charged with murder for a “self-induced abortion” in Starr County earlier this year, many pregnant people who get caught up in the criminal justice system are reported to law enforcement by health care workers. Like a woman in Mississippi who was charged with murder after a stillbirth, many people willingly turn over digital records that are used to incriminate them.

Reproductive justice lawyers say they are focused not on preparing for a potential dystopian future like the one presented in the commercial, but on educating health care providers, lawyers and pregnant people about what they can do to protect themselves right now — with the rights they still have available to them.

In January, a 26-year-old woman in rural South Texas went to Starr County Memorial Hospital for complications related to a self-managed abortion.

A nurse at the hospital reported her to law enforcement, and in April, the woman was charged with murder and imprisoned on a $500,000 bond. The district attorney later dismissed the charges, acknowledging that Texas law specifically exempts someone who has an abortion from being prosecuted for murder.

Despite the legal missteps, this case tread a very familiar path for pregnancy criminalization.

“The most common way that a criminal case begins is that they are reported by a medical provider,” Roth said.

Getting an illegal abortion looks very different in 2022 than it did in 1972: Many people who would have turned to surgical abortions can now have pills discreetly mailed to their homes. There are international nonprofits that have publicly flouted state and federal regulations for years to provide these medications to people in states that restrict abortion access.

The two-drug regimen is generally safe and effective, when taken as recommended, but there is always a risk of medical complications.

Advocates worry that people who self-manage an abortion — or experience a miscarriage that resembles an abortion — may not seek out necessary medical assistance if they fear being prosecuted.

Although Texas’ abortion law specifically exempts pregnant patients, the Starr County case exemplifies the ways they can still get caught up in the system.

“We know that prosecutors are going to try to criminally punish people, irrespective of what the law says,” said Farah Diaz-Tello, senior counsel at If/When/How, a reproductive justice legal nonprofit, in an interview last month. “For us to be able to resist this criminalization, it is important to note that it is unlawful criminalization. Merely being an act of a prosecutor doesn’t mean that it’s the law.”

Pregnant people may also worry about anyone who, in the language of the law, “aided and abetted” or helped “furnish the means” for an abortion — friends who drove them over state lines, someone who mailed them pills, a doctor who provided an ultrasound to ensure they completed the abortion.

“People are living in constant fear [because] they wouldn’t want to do anything that would jeopardize the liberty of their loved ones or their medical providers, and as a result, may avoid necessary health care,” Roth said.

Prosecutors in five Texas counties have vowed that they will not pursue abortion-related charges, but legislators are already discussing ways they may empower other district attorneys to bring charges outside their jurisdiction.

And Texas’ abortion laws do not bring only criminal penalties. The trigger law, which goes into effect later this summer to coincide with the overturning of Roe v. Wade, also has civil penalties of at least $100,000 per abortion, and under a law commonly referred to as Senate Bill 8, anyone who “aids or abets” in a prohibited abortion can be sued for up to $10,000 by any private citizen.

Already, advocacy groups have mobilized resources for people who face prosecution — or fear it. If/When/How operates a legal help line that answers questions and helps connect people to legal resources around abortion access. NAPW provides pro bono legal representation to people who are facing criminalization over a pregnancy outcome with the slogan, “If you are locked up because you are knocked up — call NAPW!”

Advocates and lawyers are working to arm health care providers and pregnant patients with information about their rights.

Since Texas’ current abortion laws do not require providers to report someone they suspect may have undergone an illegal abortion, providers who do proactively report to law enforcement may be in violation of the Health Insurance Portability and Accountability Act.

In the wake of the Supreme Court ruling in Dobbs v. Jackson Women’s Health Organization, the U.S. Department of Health and Human Services issued guidance clarifying providers’ obligation under HIPAA, stressing the importance of “giving individuals confidence that their protected health information … including information relating to abortion and other sexual and reproductive health care, will be kept private.”

The guidance makes clear that providers cannot disclose to law enforcement that a patient is considering seeking an illegal or out-of-state abortion, or provide data on all abortions performed at a facility without a court order.

Roth said this is an important message right now, as many health care providers may be inclined to over-report for fear of being criminalized themselves.

But HIPAA does not offer blanket protection to people navigating the health care system.

“Law enforcement could also use a court order, a court-ordered warrant, subpoenas and administrative requests to compel a health care provider to release a patient’s medical records in the case of a suspected illegal abortion,” said Rebecca Reingold, associate director of the O’Neill Institute for National and Global Health Law. “A health care provider could refuse to comply but would likely face fines or penalties for doing so.”

HIPAA also applies only to “covered entities,” like health care providers and insurers. Other health care services, including health tracking apps, are not protected by HIPAA and can potentially leave a trail of breadcrumbs that could help law enforcement identify illegal abortions.

“There’s a lot of different ways that we are … leaving recorded footprints, both where we go online, but then the real kicker is, where we go in the real world with your location tracking,” said Jen King, privacy and data policy fellow at the Stanford Institute for Human-Centered Artificial Intelligence.

This digital footprint trails behind each of us, documenting where we go, what we search, who we text and call, and with services like period tracking apps, when we menstruate — or don’t menstruate.

“Law enforcement can access all of that through warrants or even, depending on who they’re asking, sometimes providers will just hand that information over,” King said.

This has led many people to delete their period tracking apps, and Democratic U.S. Sens. Elizabeth Warren and Ron Wyden have introduced a pair of bills that would limit the sale of health and location data collected from smartphones.

But many digital security advocates are pushing back against the idea that the average person using an app to track their period is going to get caught up in a digital dragnet, at least at this point.

“Period trackers are not the primary form of digital evidence likely to be used in abortion prosecutions today,” said Kendra Albert, a lawyer with the ​​Cyberlaw Clinic at Harvard Law School, in a Medium post. “If tracking your period is useful to you, you don’t need to stop tracking your period, although you may choose to switch to an app that collects less data and stores it locally.”

Most often, the trail of information becomes relevant once law enforcement is already investigating a suspected illegal abortion that was reported by friends, family or medical professionals.

In 2017, Latice Fisher delivered a stillborn baby at her home in Mississippi; she was 35 weeks pregnant. Fisher originally told health care professionals that she didn’t know she was pregnant.

But when Fisher voluntarily handed her phone over to the police, they found she had googled how to buy abortion-inducing medication 10 days before she gave birth. She was charged with second-degree murder, though there was no concrete evidence that she took the medication.

After Fisher spent several weeks in jail, the district attorney put the case to a second grand jury, which declined to indict her.

“What’s really important about that case is that the police didn’t need to seek a warrant because she actually willingly handed over her phone,” Roth said. “Never, ever hand your phone over to law enforcement if they don’t have a warrant, and also don’t talk to law enforcement without your attorney present.”

If someone is actively seeking out an abortion, lawyers and digital security experts recommend taking precautions — using a secure browser and relying on encrypted texting services or burner phones for communication, as a starting point.

But for people fearful of potentially needing an abortion in the future, King said, it’s difficult to fully cover your tracks all the time.

“Those are all fingers in the leaking dam,” King said. “You can try to plug them all, but then you’ll basically be living like somebody who practices operational security for a living. That’s hard. I don’t even do all that.”