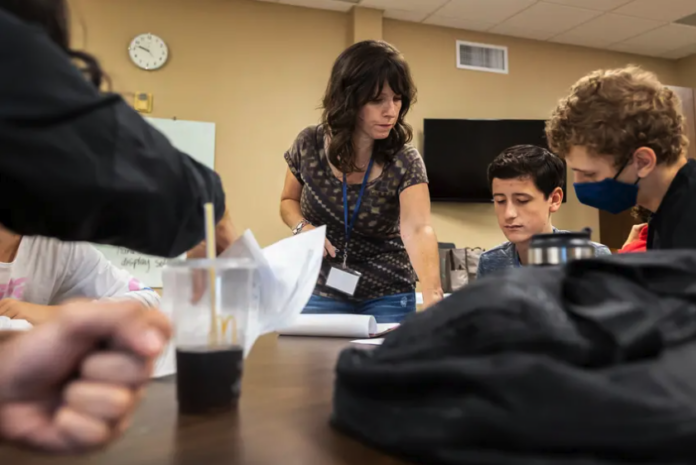 Christina Hernandez, a mother of two and a former San Antonio theater teacher, knows firsthand how difficult it is to give every student the attention they deserve.

And this school year, as class sizes have gotten bigger amid a statewide teacher shortage exacerbated by the pandemic, she started suspecting her public school district was not meeting her kids’ needs.

So she pulled them out and started home-schooling them.

“I know my kids better than anyone, and I know how they learn,” Hernandez said. “Within a week I was like, ‘They’re already just more focused.’”

Hernandez and her family are among the Texans who started home schooling when the pandemic hit.

Research suggests home schooling was already growing in popularity before the pandemic, but according to the Census Bureau’s Household Pulse Survey, an effort to examine the impact of COVID-19 on American life, the percentage of Texas families that home-school their children went up in 2020 — from 4.5% at the end of the 2019-20 school year to 12% at the start of the 2020-21 school year. The increase was particularly notable among Black families.

According to data collected by the Texas Homeschool Coalition, a nonprofit that promotes and advocates for home schooling in the state, about 30,000 students across the state withdrew from a public or charter school and switched to home schooling during the spring of 2021, an increase of 40% compared with the previous year. The figure is likely higher because the state does not track withdrawals from public schools below the seventh grade, said Jeremy Newman, the coalition’s deputy director.

First: Students learn how to sign the Pledge of Allegiance in American Sign Language at REACH Homeschool Co-op. Last: Teacher and parent Jaime Johnson, right, laughs with a group of secondary level students as she teaches a College & Career Readiness class. Credit: Annie Mulligan for The Texas Tribune

Peggy Semingson, an associate professor at the University of Texas at Arlington who tracked home schooling during the pandemic, said the increase can be attributed to a number of factors. Some families were worried about the spread of COVID-19 at schools; others who had been thinking about home schooling finally took the step after remote learning gave them a glimpse of what teaching their kids at home could look like. The Uvalde school shooting on May 24, in which 19 students and two teachers were killed, might have led some parents to switch to home schooling this year, she said.

Differences over how race and sex are taught at schools also played a role. While the topic had stirred tensions between families and educators in the past, they intensified during the pandemic as more public school lessons were transmitted to family computers during lockdown. The debate spilled into last spring’s school board races as conservative groups rallied against critical race theory, a college-level discipline that examines how racism is embedded in laws and culture. Although the approach is not taught in public schools, it became a shorthand to attack how race is discussed in classrooms.

Newman said he’s heard from parents who have chosen to home-school because they don’t like how politicized schools are becoming. That sentiment is coming from both sides of the political spectrum, he said.

Traditionally, Newman said, parents have home-schooled their children to give them a religious education. But that has shifted in recent years, with growing concerns about bullying, drugs and poor academic achievement. For people of color, fears that their children will face racism at school can drive them out, he said.

For Hernandez, the decision to home-school meant she could make sure her kids are safe and that she can talk to them about topics like sex and politics before a stranger does.

“All families are gonna have their own take on those things and the way that you want to discuss those things with your kids,” she said. “In a home school setting, they don’t have to hear things from a friend at school, they can hear it firsthand from us.”

Another reason Newman believes there’s an increased interest in home schooling is because the pandemic forced families to spend more time at home and showed them that they can educate their children without being tied to a brick-and-mortar school.

“We’re moving into an era now where people are just going to demand that there are more hybrid forms of education,” Newman said. “We build rigid forms of education because we think they’re stable, right? But people have realized that in times of crisis, they are not.”

The Family Educators Alliance of South Texas, a home-school resource center based in San Antonio, has seen an increase in calls from new home-school families asking for help, said Rose Faubush, a resource specialist for the organization. It is getting 30 calls a day; pre-pandemic, it was closer to 10 calls a day.

School districts across Texas are watching the trend closely.

When a student leaves a public school — whether to home-school, go to a private school or leave the state — the district stops receiving money for that student, though its operational costs remain the same, said Brian Woods, superintendent of the Northside Independent School District in San Antonio.

“That’s the challenge when you hear people talking about school choice and the need for school choice,” he said.

Woods said the number of students who left his district for home schooling peaked in 2020. Some returned after pandemic restrictions loosened, but many never did.

Woods said parents are allowed to educate their children in whatever way they feel is best, but the Texas Legislature needs to make sure schools receive the appropriate funding to serve the families that stay with them.

“You’re creating massive inefficiencies in the system because you’ve got empty seats, if you will, in both the [public schools] and in the charters, but again, expenses are not going down as students move here and there,” he said.

Opting to home-school in Texas is fairly simple and mostly unregulated. If a child is pulled from a public school, the parents must notify their local school district that the child will now be home-schooled. (Parents don’t need to notify the district they live in if their child was never enrolled in a public school.) The only requirements are that the child’s learning must be in a visual format, like workbooks or online courses, and that the curriculum must go over reading, spelling, grammar, mathematics and what the state calls “good citizenship.”

Home-schooling parents can either do these courses at home or in co-ops, where home-schooled students get together to learn together in a classroom-like setting.

While the popularity of home schooling has increased in recent years, Semingson said parents who choose to do it must make sure to not be lax on curriculum requirements such as reading and math. If children fall behind and don’t get the foundations they need, it can be very difficult to bring them up to the right level at a later stage, she said.

Families also have to weigh the impact on home-school children of not getting the socialization they would get in a public-school setting, Semingson said.

Still, the approach can be appealing for several reasons. Hernandez summarized hers with one word: flexibility.

Her family now starts their mornings around 8:30 a.m, two hours later than when they were in public school. They get to relax and eat breakfast before digging into the lessons of the day. They do this until about noon, when they take a lunch break and use the rest of the afternoon to either go to a museum or do outdoor activities.

Jaime Johnson in League City, southeast of Houston, said she started home-schooling four of her kids this school year for religious reasons and to provide them with a better academic setting. Johnson said she felt politics and social issues were playing an oversized role in classrooms, which was distracting to her kids. Things like using people’s correct pronouns and discussing LGBTQ themes went against their family beliefs, she said.

“It’s not out of a place of judgment,” Johnson said. “It just has no place in the school, like no one needs to be talking about their sex or their dating.”

She also said she worried about the unusually high number of teacher vacancies and substitute teachers filling in on her kids’ classes. Safety concerns after the Uvalde shooting also validated her family’s decision to home-school, she said.

“We prayed about it and we just left,” Johnson said. “What I feel like would be best for public schools is if we stayed focused on the schoolwork.”

Since starting home schooling, Johnson said she has seen her kids fall in love with learning again. School doesn’t seem like a chore or something that must be done to pass a test.

“The biggest change for me is that my kids are not stressed about learning anymore,” Johnson said.

Corie Juniel and her husband, Raphael, a Black couple in Madisonville, about 40 miles northeast of College Station, have been home-schooling their children since 2008. Most recently, their 15-year-old son became the youngest student to graduate from Sam Houston State University in Huntsville.

The Juniels said since their son’s story came out, they have received calls from families of color asking how they could start home schooling. The calls are usually from parents who have been thinking about home schooling since the pandemic or who think their children are not getting the attention they need from public schools.

Juniel tells parents they don’t need to be experts or have a college education to home-school, but they must have the dedication and willingness to craft a curriculum that fits their children’s needs.

“You are your child’s first teacher,” Juniel said.

The Juniels have also heard from parents of color worried about racism in schools and how history is taught.

Juniel said home schooling has allowed her to talk to her kids about things that might not be touched on in public schools, like how getting pulled over as a Black man in America can be a deadly encounter. She can also teach them not only about the struggles and discrimination that Black people have faced in America, but also about their successes, she said.

“We create a space for truth,” Juniel said.

Disclosure: Sam Houston State University and the University of Texas at Arlington has been a financial supporter of The Texas Tribune, a nonprofit, nonpartisan news organization that is funded in part by donations from members, foundations and corporate sponsors. Financial supporters play no role in the Tribune’s journalism. Find a complete list of them here.

This article originally appeared in The Texas Tribune at https://www.texastribune.org/2022/11/21/texas-home-schooling-pandemic/.