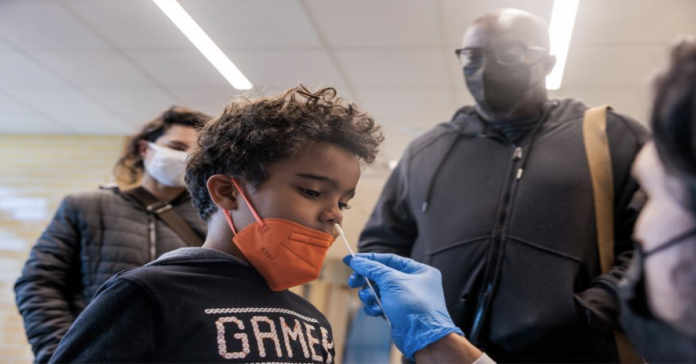 On Tuesday, the last day of winter break, Marc Scott, principal of Joe Lee Johnson Elementary in the Austin-area Round Rock school district sent a recorded call to parents alerting them that things might look different as students return to school this week.

“Your child may or may not have their actual classroom teacher leading their class over the first few days,” Scott warned, alerting parents that a number of teachers had tested positive for the coronavirus.

“We are working on trying to get substitute teachers,” his recorded message said. “But as you may know, we have a shortage across the district in that area so we will be using other staff members to cover classes in some cases and splitting classes among a grade level if we absolutely have to.”

Like Round Rock, many school districts across Texas opted to power through omicron, to stay on course with plans to reopen after the holiday break with in-person classeseven as Texas reports a record share of positive tests and some epidemiologists worry the highly contagious aspect of the variant could put more people in the hospital than prior surges simply because of the high number of people it is infecting.Some districts will continue to require masks.

But the decision is definitely testing school staffing. Schools across the state and nationwide have struggled to hire a necessary number of substitutes since the pandemic began, a concern that has increased as omicron spreads and could result in more positive cases that keep teachers and staff at home.

In Austin, the school district is struggling to find enough bus drivers to cover the nearly 350 morning routes due to COVID-19. They’ve relied on supervisors, mechanics and main office staff to drive buses on a daily basis. South of Houston, the Fort Bend Independent School District is also down 100 drivers, which has caused service delays.

But as district leaders reassure parents and students they are ready to greet children safely, some educators want more details about how districts and schools plan to respond to the challenges this new virus may present to school staffing and logistics over the next few weeks as cases are expected to peak by the end of January.

“We’re in the middle of something that we know is more than what we’ve planned for. So how are we looking two weeks down the road?” said Ken Zarifis, who leads Education Austin, the organization for teachers in the Austin Independent School District. AISD currently has no plans for virtual learning this spring. Instead, Austin district officials are encouraging students and faculty to wear two masks if they do not have a N95 mask, the one recommended for use to protect against omicron.

“People need to have a really clear message, and the [virus] is moving so quickly that just relying on [saying], ‘What we’ve done has been successful and we’re going to make sure we double mask and report positives,’ … is not enough,” Zarifis said.

Meanwhile, some smaller districts like those in Weslaco, in the Rio Grande Valley, and Lancaster, near Dallas, extended their winter break through the end of this week because of the rise in COVID-19 cases. Lancaster school district leaders said they will reassess this Friday whether to open in person next week.

“While we are doing all we can to continue in-person learning for all, until this pandemic is under control, the possibility that there will be a need to shift to on-line learning again remains constant,” the school district leaders said in a statement.

Not everyone is facing issues as they return to school.

In McAllen, a spokesperson for the school district said they have not experienced staff shortages yet and recalled how they were able to rely on the substitute teacher pool without issue in the fall. They shared a four-stage COVID-19 action plan that was adopted last year and guides their response process today. But the district did not provide details as to what would trigger a move from one stage to another.

“We do have contingency plans if things worsen but I do not know the specifics and would not likely have a chance to track that down today,” Mark May, a spokesperson for the McAllen school district, said in an email.

In Round Rock, where school officials have struggled to find substitute teachers all year, schools will start to pay teachers who cover classes for their coworkers, whether it be one period or an entire day. The district’s school board adopted a matrix to determine when to use masks. A spokesperson said while the school will close individual classrooms if there are 3 or more cases linked to each other, there is no plan to shift to 100% virtual learning at this time. Zac Oldham, one of the area superintendents in the district, told The Texas Tribune that the school district decided to wait and monitor cases the first few weeks of the semester as omicron appeared.

A TEA spokesperson insisted that the agency is offering schools “scientific and medical guidance.”

“It is reviewed regularly and recalibrated whenever a change in protocols is warranted,” spokesperson Frank Ward said in a statement. “Our focus remains prioritizing the health and safety of all our students, teachers, and staff across Texas.”

Ward provided a copy of the TEA’s guidance, which was last updated in September. It does not include the latest Center for Disease Control and Prevention recommendations published Tuesday that states reduced isolation and quarantine times should now also apply to secondary school settings.

While school districts across the state have laid out safety measures in schools and guidance for parents, faculty and students if they contract the virus, they have been quieter about specific contingency plans if an outbreak within their district creates work shortages among teachers and staff — or what might trigger a shift to virtual instruction, if anything at all. Many school districts say outbreaks will be handled on a case-by-case basis.

“Most superintendents are somewhat tight-lipped about those kinds of questions because I think they don’t want to say, ‘We might have to go remote or we may have to close specific schools,’ because it’s become such a charged issue,” said Zeph Capo, president of the Texas chapter of the American Federation of Teachers.

Capo said he’s concerned that as leaders try to avoid political pushback from state lawmakers or from parents, the result is a cloud of uncertainty about how districts will deal with this increase in COVID-19 cases.

“The more that people feel empowered to develop those plans that they feel confident about and stand by them, the better it will ultimately be for everybody,” he said. “Because we can’t stick our head in the sand.”

Correction, Jan. 5, 2022: An earlier version of this story incorrectly reported that the Round Rock Independent School District used a matrix to determine when to shift from in-person classes to virtual learning. The district has since clarified its matrix only applies to mask requirements.