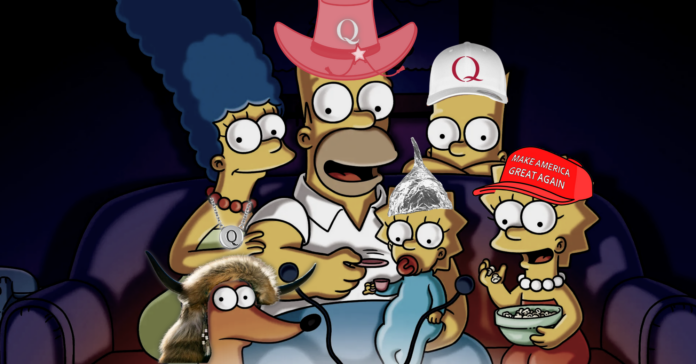 Truth is at least as strange as fiction, as evidenced by QAnon believers looking to this Saturday, September 24th, to fulfill a prophecy they believe was laid out in a 2013 episode of The Simpsons. “Something big” is coming, according to social media posts by members of the well known conspiracy group, perhaps even the collapse of western civilization and the restoration of the Trump Presidency.

That was all the information needed for the group to begin to spread their theory, despite the fact that Merz corrected the official record he made of the speech to the Bundestag, where he said that no one would forget where they were on the first day of the invasion.

The plot of the animated sitcom includes a group of “doomsday preppers” discussing WROL, or Without Rule of Law, which is conspiracy theorist code for the complete breakdown of society. This was supposed to happen following the use of an electromagnetic pulse weapon. Somehow they conclude from the episode that events that will unfold this Saturday, like those in the show, will set forth a chain reaction that will enable the group’s predictions to come to fruition.

Puzzling, but not without precedent, QAnon followers have believed for some time that Trump would be returned to office, despite the fact that the election was nearly two years ago. They cite historical evidence, including that the date Sept. 24 in the Gregorian calendar equates to Sept. 11 in the Julian calendar named for Julius Caesar. They believe that somehow this evidence means an armageddon-like event will occur, as an extension of their claims that they will never accept Trump’s loss to Joe Biden.

The leader of a Dallas QAnon cult, Michael Protzman, has made a myriad of incredible claims, including that JFK Jr. is still alive and will somehow help Donald Trump return to the White House. He has even told his followers he’s the “second coming of Christ.”

He gathers QAnon faithful from around the MAGA universe in Dallas to await the return of JFK Jr. at the site of his father’s 1963 assasination. Meanwhile, they ignore the fact that JFK Jr. died in a plane crash over 20 years ago.

Trump recently appeared at an Ohio MAGA rally wearing a QAnon pin and embracing the group and their theories, sharing a picture of himself wearing the pin on social media, including the phrase “The Storm is Coming,” a common terroristic-sounding threat popular with the group.

And music featured at the rally closely mirrored the groups theme song, “Wwg1wga” (an acronym for “where we go one, we go all”). The crowd saluted Trump with a one finger salute in response, eerily reminiscent of far-right rallies in Europe in the 1930’s and 1940’s, according to Walter Shaub, former director of the U.S. Office of Government Ethics, in a tweet this week, saying that the public should not take these actions lightly.

Some of the people attracted to the group are clearly suffering from mental illness, as evidence by those members who commit violence and murder of family members as an extension of their beliefs.

Troy Burke, a 45 year old Michigan man shot his wife in the head three times in 2021 because he believed his wife was somehow associated with the CIA and the alleged cabal of satanic liberal pedophile cannibals, as the group identifies anyone who doesn’t support Trump or their conspiracy theories. He also believed she was born Joe Biden’s son and had undergone a sex change. Burke pleaded not guilty by reason of insanity, and psychiatric evaluations agreed that he was unfit to stand trial.

Matthew Coleman, 40 year old California surf school owner and QAnon believer, took his children down to a resort in Mexico and killed them both, brutally stabbing them to death with a spear gun. Self-described “enlightened” person and devout Christian, Coleman told police he believed his kids would become monsters when they grew up, and said, “killing them was the only way to save the world.” The children, two-year-old Kaleo and 10-month-old Roxy, appeared prominently in his social media feed before their death.