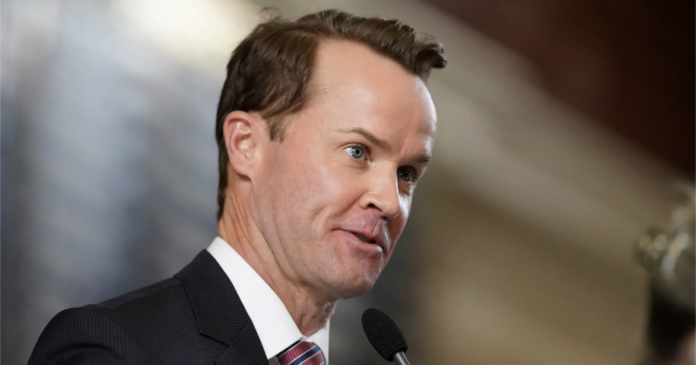 The Texas House Republican Caucus backed House Speaker Dade Phelan, R- Beaumont, over Rep. Tony Tinderholt, R-Arlington, in a 78-6 vote during a closed-door meeting at the Capitol. Phelan served as speaker for the first time in the 2021 session.

While the official vote is a month away, when all 150 members will select a speaker, Saturday’s vote signals that Phelan has strong support among the majority party.

The 47-year-old real estate broker thanked his Republican colleagues on Twitter on Saturday: “Every member will play a role in our legislative process, and I look forward to earning the votes of all my colleagues.”

During the 2021 session, Phelan helped push for the passage of the state’s new laws banning almost all abortions and allowing permitless carry of handguns.

His endorsement by the GOP caucus follows pressure from a vocal group of more conservative Republicans who want to ban Democratic committee chairs. It’s been a longtime tradition to allow the minority party to chair committees although it is out of power.

But the conservative agitators might not get their way. Phelan needs to secure 76 votes in the House to win the gavel, and Saturday’s vote shows that he likely has the support to serve a second term.

Following the endorsement, Tom Oliverson, chair of the Texas House Republican Caucus, said in a statement that the GOP caucus is “unified in our choice” for Phelan.

“Under Speaker Phelan’s leadership in the 87th Session, the Texas House accomplished one of the most conservative sessions in our legislature’s history and we are confident this momentum will continue in the next session,” Oliverson said.

Phelan has publicly defended the practice that allows Democrats to chair House committees and said in September that if reelected as speaker, he would appoint the same proportion of Democratic committee chairs for the next session.

Phelan appointed 13 Democratic committee chairs at the start of the last session, out of 34 standing committees.

Tinderholt, Phelan’s challenger and one of the most far-right members of the Texas House, made it clear when he announced his run for speaker in November that he would be running on his opposition to Democratic committee chairs.

The 52-year-old senior partner at a campus security company has served in the House since 2015 and once was a member of the conservative Freedom Caucus. He is a vocal opponent of abortion and filed legislation in 2019 that would make it possible to charge a person who has an abortion with criminal homicide. That measure failed after a Republican lawmaker did not allow for the bill to leave his committee for a vote of the full House, stating the bill moves “our state and the pro-life cause in the wrong direction.”

In response to the vote Saturday, Tinderholt said on Twitter he is “undeterred in my fight to ensure we have strong conservative leadership this session” and added that he will “look forward to the floor vote on the first day of session.” The 88th Texas Legislature begins meeting on Jan. 10.

Phelan said he is “deeply grateful” to his Republican colleagues for their support.

“The 88th Texas Legislature will include important debates on issues ranging from property taxes to foster care, and I’m confident that our chamber and our caucus will lead the charge on policy proposals that better the lives of all Texans,” he said in a statement.