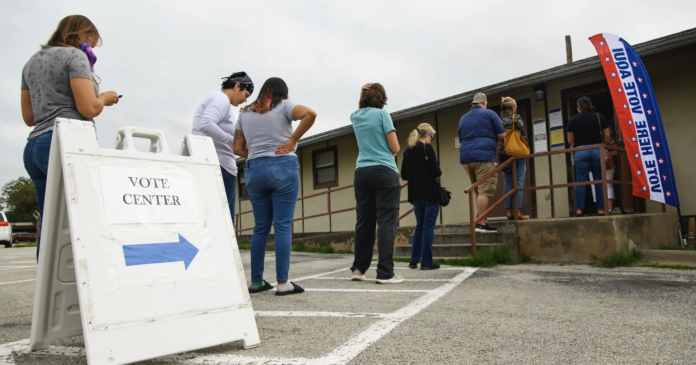 For two election cycles, Texas Republicans felt the blue waves lapping at the edges of suburban counties that had long been GOP strongholds.

The winning margins for Republicans began to narrow in 2016 when former President Donald Trump was elected. In 2018, counties that hadn’t voted for a Democrat in decades turned out for Beto O’Rourke in his unsuccessful bid to unseat U.S. Sen. Ted Cruz. The El Paso Democrat also forced Cruz into single-digit wins in ruby red Republican counties.

In the presidential race two years later, Joe Biden held on to the counties that flipped, though his winning margin was slightly narrower, and the Republican lead shrunk even in red counties that remained in the GOP’s column.

But by the end of Election Day this time, the blue political waters had receded. In the first contest without Trump on the ballot or in office, Gov. Greg Abbott’s performance against O’Rourke stalled Democratic momentum in some of the suburbs — even if the GOP has yet to match its pre-Trump levels of support.

Growing communities north and south of Austin were once reliably Republican, delivering big double-digit victories in the early 2000s. They have since transformed politically.

The days of 40- and 30-point leads for Republicans were a distant memory in Williamson County before O’Rourke narrowly flipped it in 2018. That year, Abbott easily held on to the county in his reelection bid, but another statewide Republican — Attorney General Ken Paxton — lost there. Tuesday night’s results may have put the county into the battleground category after Abbott managed only a 1-point lead.

Hays County, however, may be out of reach for Republicans moving forward. Home to Texas State University, the county hadn’t voted for Democrats at the top of the ticket since 1992 before swinging hard for O’Rourke in 2018 and narrowly opting for Abbott’s Democratic challenger that year, former Dallas County Sheriff Lupe Valdez.

Hays gave Biden a slimmer margin in 2020, which O’Rourke was able to match this year. In fact, O’Rourke’s lead over Abbott in Hays slightly outpaced his margin of victory in big blue Harris County.

Often described as the most ethnically diverse in the United States, Fort Bend County’s hard swing toward Democrats began in 2016 when the party hoped the county’s diversity could turn it reliably purple. O’Rourke widened Democrats’ lead in the 2018 Senate race while Abbott took home a razor-thin 0.2% margin of victory.

The county remained blue Tuesday night but with a narrower margin for O’Rourke.

Meanwhile, Montgomery County remains a bright spot for Republicans, offering the party whopping double-digit margins of victory. North of Harris County, it is home to The Woodlands and Conroe and has a significantly higher share of white residents than Fort Bend. Abbott managed to boost the Republican lead by several points Tuesday night, though he underperformed compared with his win in 2014, when he was first elected governor.

Big blue Dallas County aside, North Texas has long been Republican country, but the party’s dominance suffered in the Trump era.

Most notably, O’Rourke narrowly flipped Tarrant County — considered the most conservative urban county in the country — in 2018. Biden managed to hold on to the county two years later. Republicans may rest easier now that the state’s third-largest county has flipped back to Republicans with a 4-point lead for Abbott, but the governor fell well short of matching his 2014 performance.

Abbott also helped Republicans rebound in Denton and Collin counties, where Democrats had cut into their control since 2016. But the GOP is still a long way from returning to pre-Trump support in the increasingly diverse pockets of the state.

Republicans once saw 40- to 50-point winning margins in Collin County. The first time he ran for governor in 2014, Abbott won the county by more than 30 points.

The Texas Tribune is a nonprofit statewide news organization dedicated to keeping Texans informed on politics and policy issues that impact their communities. This election season, Texans around the state will turn to The Texas Tribune for the information they need on voting, election results, analysis of key races and more. Get the latest.