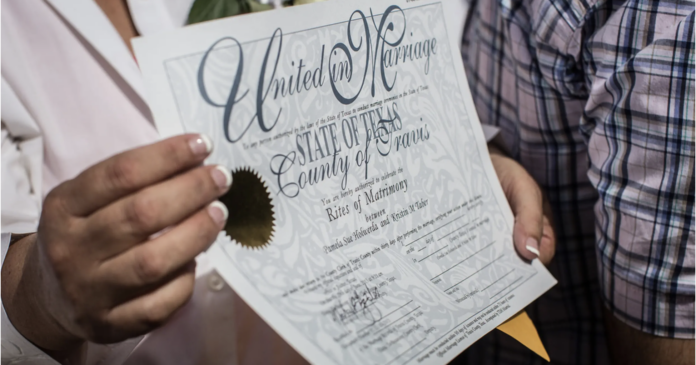 The Respect for Marriage Act would repeal the 1996 Defense of Marriage Act, which barred the federal government from recognizing same-sex marriage until the U.S. Supreme Court ruled that law unconstitutional in 2013. The high court went further in 2015 and ruled in Obergefell v. Hodges that states can’t ban same-sex marriages, declaring that gay, lesbian and bisexual Americans have a constitutional right to marry.

The core provisions of the Respect for Marriage Act would be relevant only if the Supreme Court reverses that decision in the way it revoked a constitutional right to abortion this summer.

The bill would not force states that currently have unenforceable bans on same-sex marriage, like Texas, to offer marriage certificates to gay, lesbian and bisexual couples if Obergefell is overturned. But it would mandate that the state recognize a same-sex marriage that occurred in a state where it is legal. The vote on Wednesday in the Senate clears the way for it to pass the chamber easily. It will then return to the House, where members will consider the amendments made in the Senate. The House passed the original version of the bill in July.

Cruz blasted Republican Senators who voted with Democrats to give the measure the 60 votes it needed to overcome a potential filibuster in the upper chamber.

Cornyn told reporters on Tuesday that he would not support the bill because gay marriage “is already a Constitutional right.”

Cruz also said the vote was harming Republican chances in a high-stakes Senate runoff election in Georgia between Democratic U.S. Sen. Raphael Warnock and Republican Herschel Walker. Cruz said on an episode of his podcast on Wednesday that the bill was “kicking evangelical voters in Georgia in the teeth.”

Codifying same-sex marriage at the federal level has been a priority for Democrats after the Supreme Court decision to overturn Roe v. Wade, amid fears that the court might reconsider constitutional protections for gay marriage. Included in the U.S. Supreme Court’s overturning of the constitutional protection for abortion was a concurring opinion from conservative Justice Clarence Thomas, who pushed the court to revisit cases related to same-sex marriage. That fueled already heightened anxieties from LGBTQ groups that the end of Roe v. Wade could be the tip of the heavily conservative court’s iceberg.

Democrats floated the idea of passing the marriage bill before the midterm elections, but punted until after the elections. Republicans had voiced concerns about the need to protect religious liberties in the bill, but a group of bipartisan Senators announced this week they reached an agreement on a revised version of the legislation, which they think will garner enough Republican votes.

Correction, Nov. 16, 2022: A previous headline of this story misrepresented a U.S. Senate vote on the Respect for Marriage Act. The bill was headed for Senate passage at the time of initial publication. It had not yet passed the full Senate.